Last year, Google Photos treated iPhone and iPad users to a new, vastly improved video editor. Heavily based on the Clips app originally developed by Fly Labs and acquired by Google in 2015, the basic controls for working with multiple source videos in a timeline were much easier to see and use than other editors of the time, including Apple's own iMovie app. It has been a little more than a year since it launched on iOS, and now the new movie editor is rolling out to Android users.

We got a pretty big sign the new movie editor would be coming soon after a teardown of v3.16 added text referencing a new editor and a matching set of features. Google seems to have started rolling out the new video editor in the last few hours, but it may not automatically trigger on your phone or tablet. I had to update to the latest version (v3.18.0.192689168) and restart Photos before it worked. However, once I created a movie using the new editor, I could open it on older versions of Photos (at least back to v3.17) and it would activate the new editor, as well. 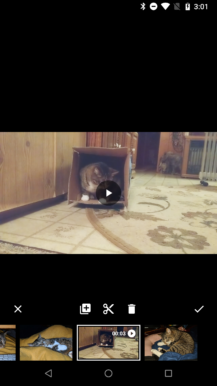 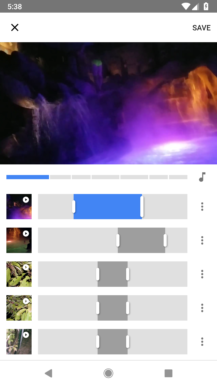 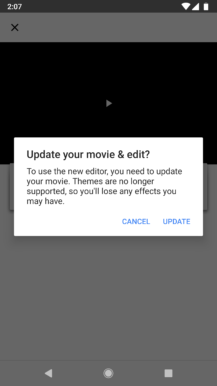 The new movie editor leaves behind the all-black background and takes on the white color scheme that has been flowing into many Google apps of late. The old UI included each of your clips and photos in a carousel across the bottom with the main video centered vertically. The new movie editor pushes the primary video viewer toward the top of the screen and stacks each of your selected clips below it and shows exactly how much of each is included in the current edit.

Notably, this layout massively reduces the time it takes to make adjustments to the length of a clip. The old UI required opening each clip in a different screen and adjusting sliders. As the screenshot shows, the new layout places all of those sliders front and center for speedy edits. 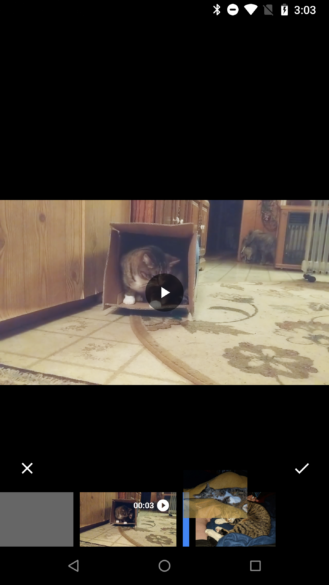 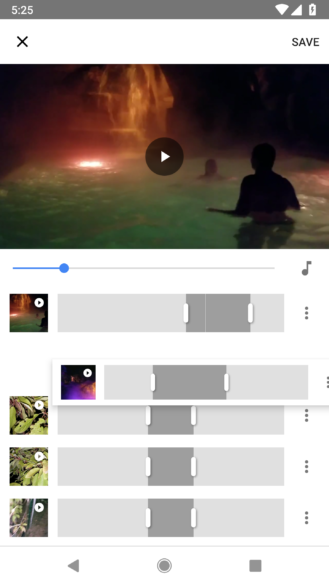 Some functions remain fairly similar but got a new look, like repositioning clips from one spot in the timeline to another by long-pressing on the thumbnail and then dragging it to a new location.

Where the new editor really shines is in the additional controls. Tap on the overflow button next to a clip and you'll see several features that weren't available to the old UI. There are simple commands for moving a clip up or down in the timeline, showing or hiding the unused portions of a clip, muting the audio, inserting a new clip, duplicating the current one, or removing it from the timeline. 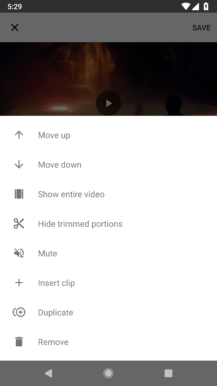 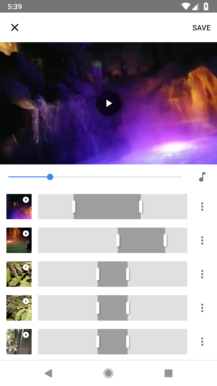 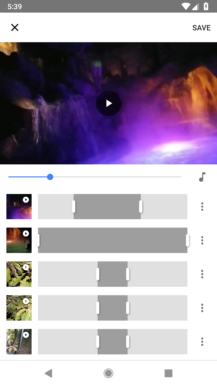 Left: Overflow menu. Center+Right: Before and after 'hide trimmed portions.'

Aside from basic aesthetics, music is added in the same way it was in the old editor. Just tap on the music icon next to the main scrubber below the video and choose if you want to use your own music, various themed tracks provided by Google, or muting the music outright. 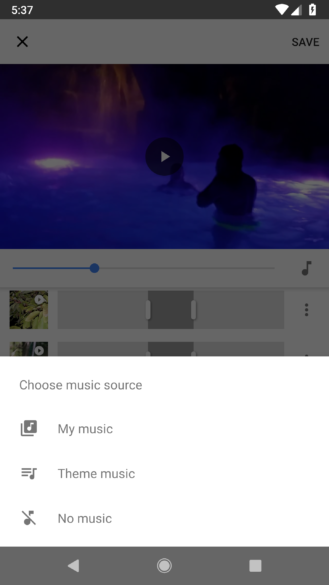 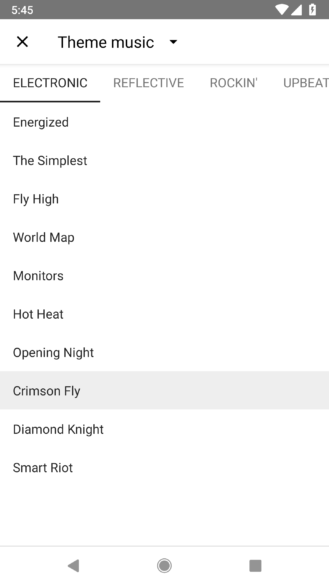 For a pretty thorough guide through the history and functions of the new editor, check out a really well-made video by Mark Dodsworth demonstrating the new editor when it was first released on iOS.

There are a couple of things notably (still) missing from the new editor. As we expected from the teardown, it doesn't support those Instagram-like visual themes. This means you can't intentionally style your videos with special filters. As Dodsworth points out in his video, this feature was supposed to return at some point. In the meantime, you could always use a separate editor to add those effects and then re-import your clips into Photos, but that seems like quite a hassle. For that matter, there's no way to modify clips at all, including things like flipping or rotating the image, or censoring anything in the frame.

The other feature that appears to be missing is a tool for adding text and other overlays to the timeline or clips. There's no need for something too elaborate, but some basic title effects would probably go a long way. Again, there are ways to work around this, but they leave a lot to be desired. These things will probably come along down the road, so these points aren't meant to be critical, just acknowledging some common needs that aren't yet covered. 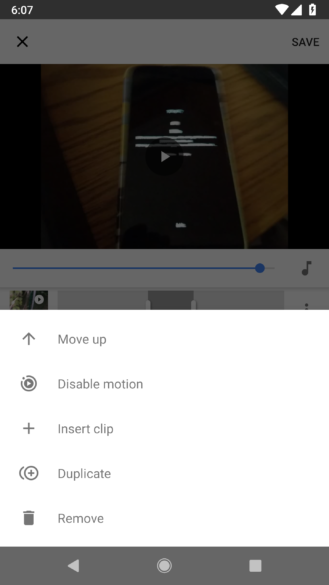 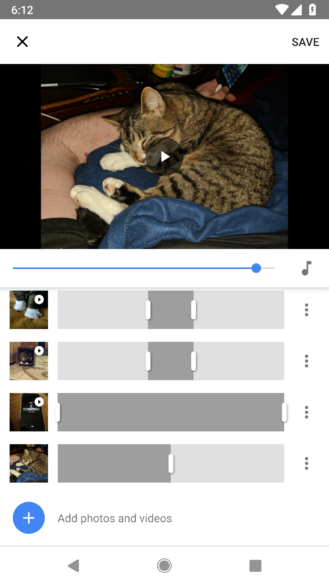 You can add most types of media supported by Google Photos, including videos and still photos. If you select a Motion Photo, it can work as either a short clip or a still, just use the overflow menu to enable or disable motion.

That's about it. Go forth and make some cool movies this weekend!