With Android tablets being... Android tablets, Chromebooks are quickly being adapted to fill the void. On supported devices, they combine the utility of Android apps with the flexibility of an adaptive (and productive) form-factor. The latest tweak, presenting Android-style Settings and Shortcuts apps in the launcher, further affirms the role Google's Chrome OS is set to assume.

It's no secret, we're of the opinion that Chrome OS devices are set to displace Android tablets, and app-centric changes like these seem to imply that Google feels the same way. The changes were announced just earlier today by François Beaufort, Chrome evangelist and Googler. 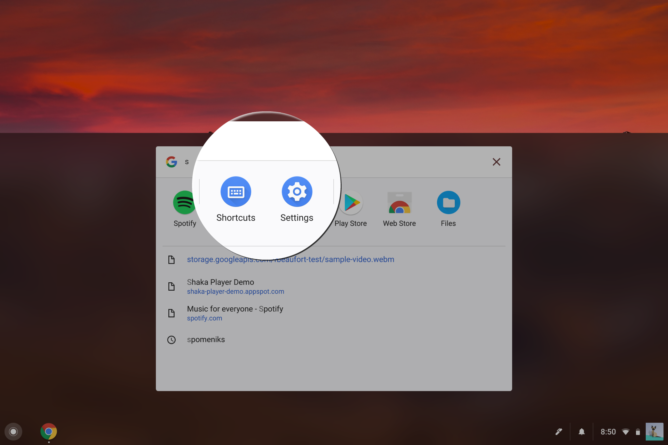 Shortcuts and Settings apps in the launcher on Chrome OS (above), former location for

The Settings app was previously accessible via the 3-dot menu in the corner of most windows, or the avatar and icon-speckled menu in the bottom right. Since Android apps landed for Chromebooks, the Settings menu has had a decidedly Android-esque feel to it, and this change effectively rounds that out.

It's tough to say precisely what the Shortcuts app is (switching to and from Canary is a bit of a process for us to test), but based on the icon it's likely pointed at the keyboard shortcuts overlay (accessible via Ctrl+Alt+?).

Comments on Beaufort's post indicate that the change is also live in Dev channel, at least for some devices. Barring it being held back, it should trickle down to stable in two or three major releases.