Google Maps recently made news as a few people started getting audible instructions with the names of visible landmarks in place of hard-to-see and sometimes indiscernible street names. In very nearly the same breath, v9.76 began rolling out through the beta channel late last night. Unlike most updates, this one doesn't seem to bring a lot in the way of new features outside of a couple small tweaks, but it does strongly hint at events added by the community, possibly opening up a whole new avenue to get people together.

The Maps team is continuing to improve the turn-by-turn navigation experience with a friendlier method of relaying directions. Instead of playing back instructions with a direction and the street name for your next turn, Google may now use the name of a nearby landmark.

According to a pair or recent tweets by Deemah MS and Scott Stein, Google Maps instructed them to make turns after the fast food chains Burger King and White Castle (respectively). Engadget has since received confirmation from Google that using landmark names is being tested as a way to improve guidance.

So @googlemaps instructed me to “turn right after Burger King” ... I think this is the best update yet. #mindblown

Google Maps told me to make a right “right after the White Castle.” Does it do that now?

Thanks to reports from some readers, we know this isn't a brand new test, but it has been occurring for some people for at least a few months. Unfortunately, we were unable to reproduce the behavior or get confirmation. After retesting several locations, we still haven't been able to get Maps to use a business name rather than a street name, which likely means it's only rolling out to a small set of users, or may be linked to specific locations.

Certain types of landmarks are great points of reference since they often have brightly lit signs and familiar color schemes. They're almost always far more visible than a small reflective sign, especially in certain lighting conditions. It's certainly going to be easier to find your way if the instruction is to turn left at the Wendy's than to be on the lookout for a road named Hualapai. (True story, many years ago, I was late to meeting friends once because I was looking for a road I assumed would be spelled wallapie.)

A reader spotted a happy little fella hanging out on his traffic notifications before driving home. It looks like a smiley face has been added to some commuting notifications. This isn't tied to the latest update, so you will see it on older versions.

I haven't seen the smiley myself, but while writing this post, I did get a different notification with a car emoji. The general consensus is that these are pretty new, but it's hard to say with any certainty if other people haven't been receiving these for quite a while.

Regardless of the reason, it doesn't get in the way and it's kinda cute. And who knows, maybe it's a sneaky way to ease some of that road rage. – Thanks, Steve Hopper Jr.

More photos in the carousel 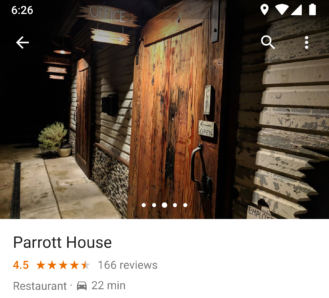 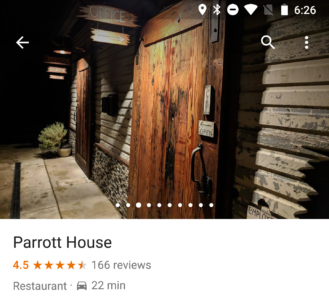 If you don't care to dip into the full list of photos for a location, you can always swipe through some of the top photos in the carousel at the top of the detail page. As of the latest update, there are now nine pictures to cycle through, up from four in previous versions. And before somebody challenges my counting abilities, remember that the last dot on the carousel contains links to open the full page of photos and to post new images.

Publishing events (for everybody)

Several months ago, it looked like a new feature had been added for business owners that allowed them to add events directly from the Google Maps app. If that interpretation was correct, it would be a convenient way for business owners to keep their event schedule up-to-date without sitting down to a computer to add new entries. 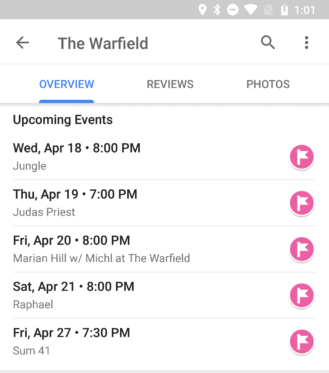 Now it looks like a similar feature may become available to regular users. New text was added in the latest update that roughly matches the additions from last August, but this time with a few lines that are phrased as a thank you to people that are helping people stay updated and find events they care about. This language would obviously sound out of place for the owner of a venue, but it's similar to something Local Guide contributors often see.

Another hint comes with a warning line that appears in the event creation text, which specifies that events added in this way are visible to everybody.

<string name="UGC_EVENTS_PUBLIC_PUBLISH_WARNING">IMPORTANT: Events are visible to ALL Google Maps users, not just yourself!</string>

When it comes to the details, they're pretty straightforward based on the way existing events are shown. Users will be able to name the event, set a date and time for it to begin and end, a location, and optionally attach a website.

There is a prompt asking users to pick the type of event, but there's no list of categories in the text. Perhaps that is provided by the server, or it may be added in a later update. There may also be an option to decide if the end time is actually shown to users, in case people want to convey that the party will stop when everybody leaves.

Of course, there are also options to edit and delete events, which brings up the last of the clues. One line specifically states, "requests to delete are only guaranteed if you created this event." This is a pretty clear sign that deleting events is at least partially a communal activity, not just an action a business owner can take directly.

From here, the obvious policy and implementation questions have to be asked. Is event creation limited, and if so, who will be able to post events? Will events be shown with the creators name? Can a business owner freely delete or modify events at their venue even if somebody else posted them? What will be done to prevent abuse? And so on... But that's mostly stuff we probably won't see or learn about until the Maps team officially launches this feature.

Assuming it isn't ruined by abuse and pranks, I really like the idea of community-driven events. It's a great opportunity to increase visibility and could take responsibility off of business owners, many of which aren't savvy enough or interested in doing the regular maintenance to post updates. This might also open up the realm of street events that can't really be created in Google Maps today without being linked to a specific business.

If you're waiting on a train to arrive and expect it to be coming just two minutes late, you might not realize the last update came twenty minutes ago and the train hasn't moved since then. Depending on data sources, you might not be able to count on getting timely updates, but at least it might be helpful if you can know how old the data is. Maps may begin displaying a 'freshness' note with mass transit vehicles like busses and trains.