Now that multiple Android OEMs have launched phones without headphone jacks, consumers have had to reluctantly concede that true wireless earbuds need to be a thing. And they are, with some compelling options out there from the likes of Jaybird, Bose, and Zolo (by Anker). They're still by no means cheap, however, so it's exactly the right time for the TicPods Free from Mobvoi to enter the fray.

Mobvoi is a relatively new brand, but one that has developed into a reliable manufacturer of cheap but well-made tech products. I reviewed the TicHome Mini portable Google Assistant speaker last year and was pleasantly surprised by it. That was followed by two budget Wear OS (then Android Wear) smartwatches which have won similar plaudits for their combination of good performance and low price. 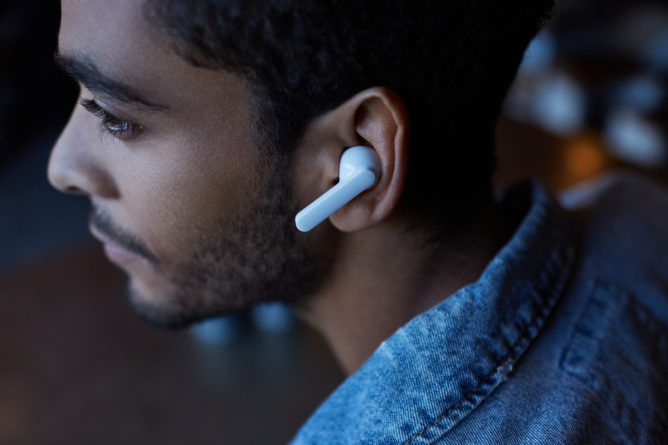 Next up for the Google and Volkswagen-backed Chinese company are the TicPods Free. There's no doubt these earbuds take inspiration from Apple's AirPods, but they cost a great deal less — $129 full price, with discounts for super early-bird backers on Indiegogo going as low as $59. They also offer more advanced touch controls. A double-tap will answer/end a call or skip a song, sliding up and down adjusts the volume, and you can long press to call on the Google Assistant, Alexa, or Siri. With noise isolation and cancellation, there's every chance the audio output will be competitive. In-ear detection is another plus, meaning you can simply take out one of the earbuds to pause your music. Both sides have mics built in, and digital ambient noise reduction is employed to make sure you sound clear when on a call. Using them for sport is no problem since they have an IPX5 rating indicating protection from rain and sweat.

As you'd expect with a small wireless device of this kind, a charging case is included. The TicPods are said to last 4 hours on a single charge, which only takes around 40 minutes. The case adds a further 14 hours of battery life, plus quick charging is on board to supply 85 mins of use from just 15 mins on the charger. If there's one negative from what we can see so far, it's that they use micro-USB – in 2018, I know.

To begin with, the TicPods Free are available only through an Indiegogo crowdfunding campaign and delivery to backers is estimated for July 2018. They come in white, blue, or red, and the MSRP is a reasonable $129, with early-bird prices of $59 and $79. There are also bundles of two TicPods together or the earbuds plus other Mobvoi products — check out the campaign for more details.

Google Voice integration with Sprint will end on June 1st

WebView Safe Browsing coming to all apps this month