You may have noticed that when using Chrome on some devices, a home button appears in the address bar. This is because manufacturers can optionally include an APK called 'ChromeCustomizations.apk' in the system folder, which sets default values for the home link and bookmarks (there's an example here). Strangely, if you have a device without ChromeCustomizations.apk, you can't get the home button in the first place.

Now it appears that might finally be changing, according to a new flag discovered by XDA Developers. The flag, called #force-enable-home-page-button, turns on the home button whether your device has the ChromeCustomizations APK or not. It's only in the very latest build of Chrome Canary, so if you don't see it, the update may not be rolled out to you yet. Just like when OEMs enable the button, you can go into Chrome's settings to set your home page of choice. 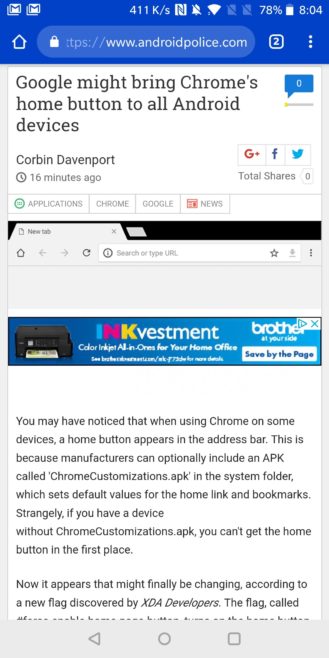 It's not clear at this point when the flag will arrive in Chrome stable, but I wouldn't expect it any earlier than v67 (due to be released in April). There's also no telling if it will become a setting in Chrome, or if it will remain hidden among the hundreds of other flags. You can grab Chrome Canary from the Play Store below.

Google is now rolling out the home button to users on Chrome Dev and Canary. Thanks Solomon Rajan, Moshe, and Lucas de Eiroz!

The flag can now be activated in Chrome Beta.