According to an email being sent to G Suite administrators, an Early Adopter Program will be available to Gmail users "in the coming weeks" that introduces a "fresh, clean look" for the service's web interface. The program is also set to bring new features like the ability to "snooze" emails to reappear in your inbox later, the way you can in Gmail's more experimental email client, Inbox.

Additional features the refresh will add include smart reply for messages on Gmail's web interface, easier access to other G Suite apps like Google Calendar from inside Gmail, and native offline support—although that one's not coming until June. Google says that while many Chrome extensions already work with the new Gmail, it can't guarantee they all will.

We first learned about these changes way back in September, and we saw signs the snooze feature would be coming to the Android app at large earlier this year (it's already live for Exchange accounts).

Google recommends keeping an eye on its G Suite Updates and Keyword blogs for more updates—but you can be sure we'll have them as they're available, too.

We've received a statement on the upcoming changes from a Google spokesperson. So many puns.

"We’re working on some major updates to Gmail (they’re still in draft phase). We need a bit more time to compose ourselves, so can’t share anything yet—archive this for now, and we’ll let you know when it’s time to hit send."

Thanks to the guys over at Android Authority, we now know what the new Gmail is going to look like. We can see that the facelift incorporates elements of Material Design but not in a way that simply copies Inbox by Gmail — there are some new design features here too.

As expected, we can see smart replies have been added. There's also evidence of plugins for Google Keep and Calendar.

There's also further confirmation that Gmail's built-in Tasks system is being overhauled. The new Tasks icon we recently covered is corroborated by the images below.

Lastly, we can see that there will be 3 different view options in the new Gmail, similar to what we have now with "Comfortable, Cozy, and Compact," except they will be called "Default, Comfortable, and Compact" going forward. With Google I/O coming up next month, we can expect to hear more official things about the Gmail redesign then, if not before. 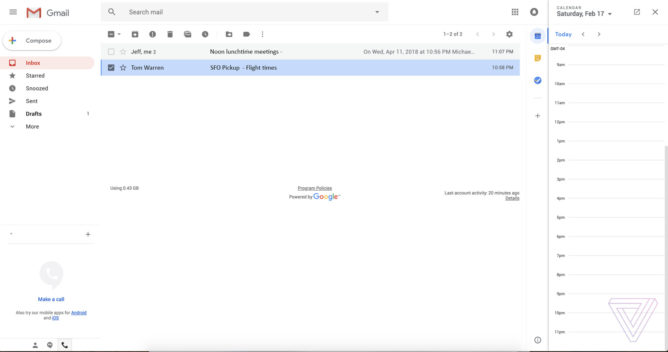 The Verge has posted more screenshots of the new Gmail redesign, showing its features much more clearly without all the blacked out sections. For the first time, we get to see the new splash screen (with what looks like an animated Gmail logo during loading), snooze settings, and collapsed menu (below). We also get a better look at the calendar plugin in the right-hand sidebar (above).