HTC might not have seen the greatest sales from the HTC 10 when it launched back in 2016, but you have to hand it to the company for maintaining support. The 10 went from Marshmallow, to Nougat, and now to Oreo. The Verizon variant is the latest version to get the update, but it might take some time to hit all devices.

The OTA update (v 3.18.605.13) has all the usual Oreo features including picture-in-picture video, notification dots, and autofill providers. HTC has also adopted the new, lighter Oreo system theme you see on stock devices. It includes new security patches, too. A similar update has also hit the Sprint and unlocked versions. 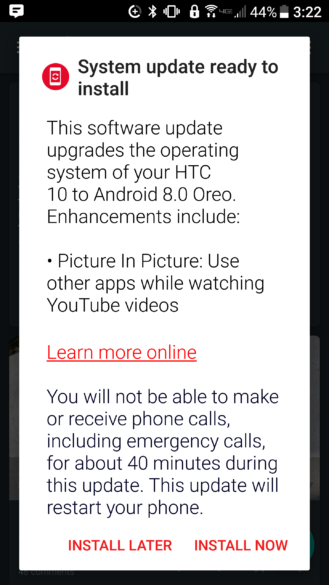 You can head to the update menu on your device to see about pulling down the update manually, but Verizon usually rolls OTAs out in batches. There's a Reddit thread about the update, and some owners report getting the update already. Don't rush this one—you've got to savor the update as this will probably be the last one the HTC 10 ever sees.