Remember a few years ago when smartphone makers were just racing to have the most megapixels possible? Ah, those were quaint times. Now, it's about the number of cameras you can cram into a phone. Huawei is leading the pack with three rear cams on the P20 Pro, but how'd it manage that? The phone-destroyers at iFixit are here to find out. They've taken a P20 Pro apart to find out what's up.

The P20 Pro has a 40MP RGB camera along with a 20MP monochrome sensor and 8MP telephoto module. There's a 24MP selfie cam, as well. Despite all the added camera bulk, the P20 Pro is similar in size to phones with just one or two camera modules. iFixit reports that the P20 Pro is relatively easy to open up despite having IP67 water and dust-resistance. The internals are also somewhat modular, making future repairs feasible.

The rear cameras are all living on one end of the remarkably compact motherboard. Huawei only talks about the optical stabilization on the telephoto camera, which is where it would make the most difference. However, iFixit says all three sensors appear to have OIS. 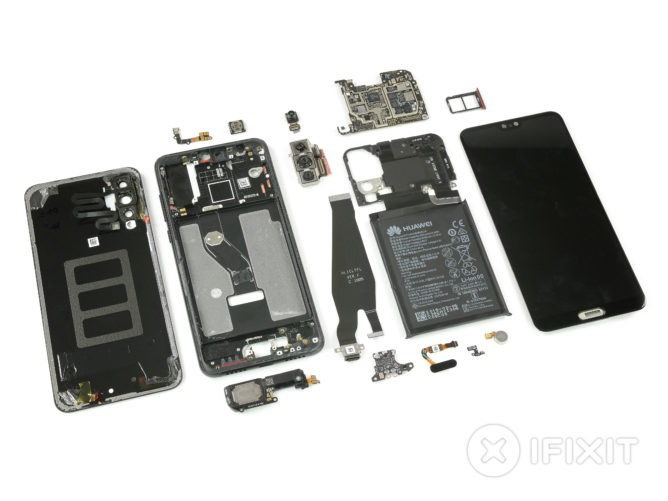 The overall repairability score is 4 out of 10. That's the same score Samsung earned for the Galaxy S9 but two points lower than the iPhone X. Huawei loses points for heavy adhesive use holding the screen in place. The battery is really stuck in there, too.