Huawei released its flagship Mate 10 Pro in the US a few months back, but the P20 is not officially destined for American shores. You'll be able to get it on this side of the pond, but only in a few places. There are currently two eBay listings from reputable sellers where you can secure a unit right now. Be prepared to pay handsomely, though.

This is an international unlocked device, so it'll run on GSM carriers—no Verizon or Sprint. As for LTE bands, you've got the following.

That covers all the main bands in use by AT&T and T-Mobile, but you're missing a few newer ones like B66 and B71 for Tmo and B29, B30, and B66 on AT&T. Those are just starting to roll out, and most phones from the carriers don't support them yet. Still, you might wish you had them in a year or so. 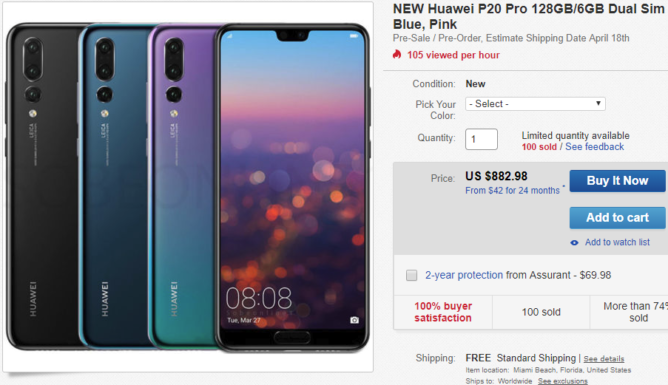 The P20 Pro is available from sobeonline1 and never-msrp on eBay. Both have good ratings and the phone is priced at about $883. That's much less than the full €899 price converted to dollars.