We don't usually cover infographics and comparisons on Android Police - most are biased, pointless, or without much credibility - but this latest data set from appfigures made us stop and do a double-take because it presented interesting stats from a rather reputable app analytics company.

appfigures' report looked at 10 different questions regarding the Play Store and App Store and tried to answer them with stats pulled from its Explorer app research tool. The answers are all very interesting in their own right, but a few of them caught our attention. First of all, as shown in the graph at the top of the page, it's clear that more apps are going cross-platform from iOS to Android than the other way around. One way to interpret this is by saying that devs are still in the iOS-first mentality, but I think the narrative has shifted a little over the years. Yes, some apps still release for iOS first, but the lure of Android's large market share may be causing devs who were going iOS-only to rethink and consider an Android app too. And it also tells us that those who release on Android first aren't seeing a large incentive to also develop for iOS. 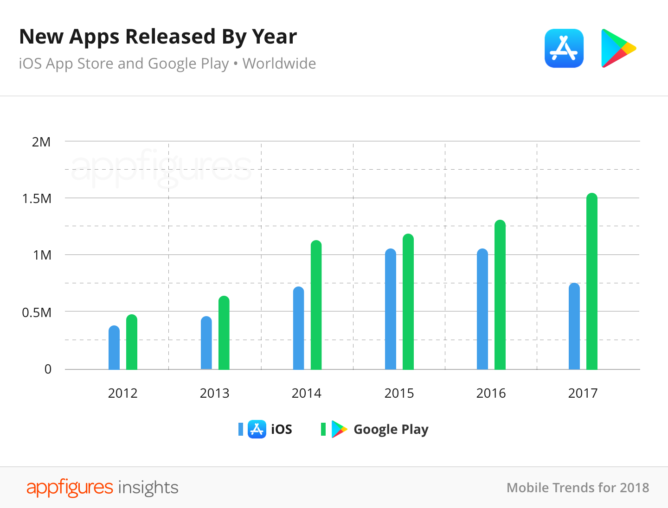 The second graph above shows the number of new apps released every year and the repercussion of Apple's tight grip and flush of crappy apps from the App Store. While both platforms were seeing a steady growth of new apps year-over-year, 2017 told a different story. For the first time, the App Store had fewer new apps than the year before, while the Play Store continued ballooning up. I'm not sure that's a good thing for Android, as our experience tells us many of these apps are free-to-play cash-grab games and low-quality releases, and it's getting tougher and tougher to find the good gems among them. 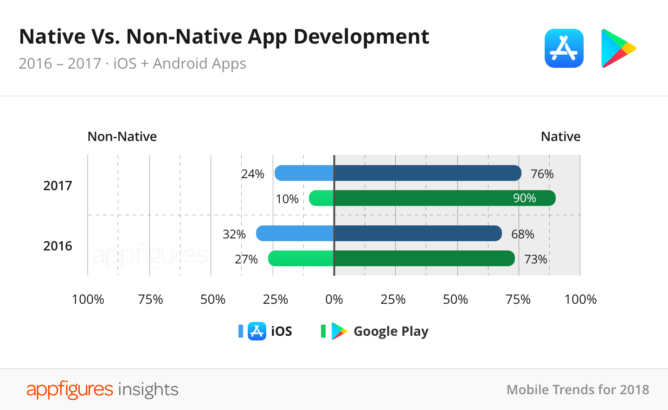 However, the third graph here certainly made me cheer up. In 2016, 27% of Android apps released were developed with non-native tools, but that number dropped to 10% in 2017. Hopefully, 2018 continues the trend toward more native apps. Sure, some non-native tools make cross-platform development easier and when used appropriately can be as well-integrated and smooth as native apps, but more often than not, they're used as a cheap shortcut to port an app from one platform to another.

The report has more interesting data to peruse like the different non-native development tools (Cordova and Unity are at the top, but Adobe Flash/Air still sits pretty at 10%), the most prolific development countries (US at 33.5% with China rising at 15.9%), and the most popular categories per country (games are prominent nearly everywhere, and books are popular among Google Play developers in Russia... which I'm guessing has something to do with that scammy book situation that hasn't been fixed in years). If you're interested to see the details, check out the full report from the source below.

[Update: Now up for pre-order, ships May 28] Polk Audio announces the first soundbar with ...