After being in the news for all the wrong reasons lately, Facebook is moving to allay data privacy concerns and restore some semblance of trust. This comes after the Cambridge Analytica scandal — in which data from 87 million users was improperly shared — and another controversy surrounding data harvesting in Facebook's apps. The FTC has been watching these stories with interest and is now investigating the company's practices.

In response, Facebook has made its privacy controls easier to access and use, and now two blog posts detail further changes. The first of those outlines proposed updates to its terms of service and data policy, designed to provide extra clarity without asking for any new permissions or altering previous choices.

The changes include adding more information about various privacy aspects, including:

Over the next seven days, Facebook wants feedback from users about the proposed changes, at the end of which everyone will have to agree to them once again on the site. At this point most people will probably just check the box and move on without reading anything, as usual.

In a separate post, Mike Schroepfer, Facebook's Chief Technology Officer, issued an update on changes to the way Facebook's apps interact with other data on your devices. He detailed the tightening of permissions pertaining to several APIs, such as Events, Groups, and Pages. There will also be stricter requirements for apps that utilize Facebook Login and the Instagram Platform API is deprecated as of today. 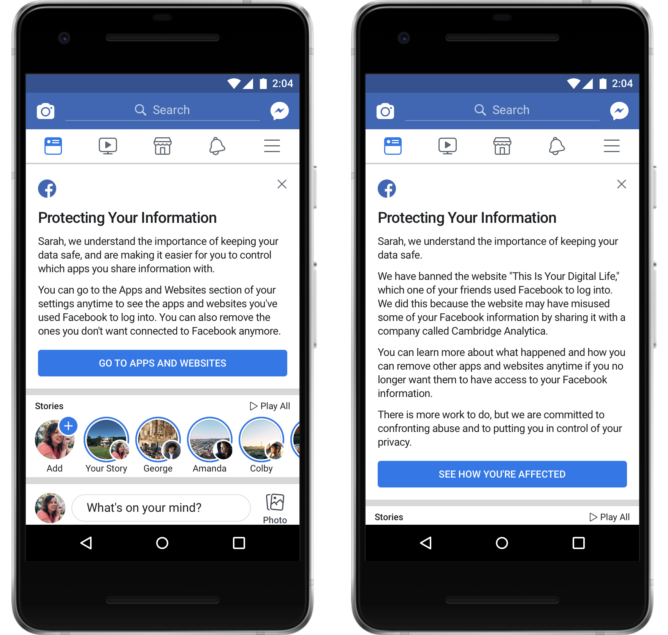 Due to information scraping for nefarious purposes, the ability to search for friends using a mobile number or email address is being disabled. The opt-in feature that uses call and text history from your phone to push frequently contacted friends to the top of your Messenger list isn't going away, but it's been promised that it will never collect any data other than names and logs will be deleted after one year.

A product called Partner Categories that lets third-parties use Facebook for targeting is being shut down, and as a final gesture, a link will be posted to the top of everyone's news feed explaining the possible implications of the Cambridge Analytica scandal (above image). The option to manage apps will also be included as part of this messaging.

Facebook is understandably keen to make amends for its recent misdemeanors, but whether any of this will be enough to regain the trust of well-informed users remains to be seen. If my recent conversations with friends are anything to go by, there are plenty of people in the process of shutting down their accounts. That said, Facebook's user base is so large that it may not be enough to cause panic in Menlo Park just yet.

'OnePlus Bullet Wireless' headphones might be released alongside OnePlus 6