Like it or not, the OnePlus 6 is going to have a notch. In an attempt to soften the blow and deal with the inevitable criticism ahead of the phone's launch, OnePlus has been bullish about the inclusion. Co-founder Carl Pei did an interview in which he explained the decision and its various merits, and CEO Pete Lau started up a thread on the company's forum to engage with fans on the subject.

Many who've added to the conversation have inquired about the potential ability to hide the notch somewhat, by making the status bar black with notification and status icons in white. This is something we've already seen on the Huawei P20 and it's probably enough to appease most detractors since you still get the additional screen real estate but without the unsightly cutout. Thankfully, OnePlus is going to implement the same solution, although it won't be available until after the phone's launch. 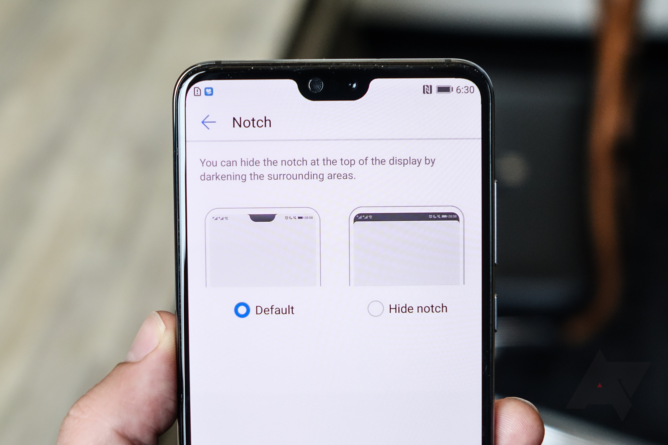 The "Hide notch" feature on the Huawei P20 shows us what to expect.

In a new post on the forum today, Lau explained that this notch-hiding feature had been decided against earlier in the development of the OnePlus 6, but the company is taking a U-turn in response to vociferous commenters.

"A black-out feature was seriously considered in the early stages of the development of the OnePlus 6. At the time we decided against adding this feature. We wanted to focus all of our time and resources on delivering an exceptional full-screen experience. I still believe the best way to experience the OnePlus 6 is using the full potential of the display. Recently many users have raised interest in having a black-out function. We respect your feedback, and would like to give everyone the ability to choose. This function will enable you to black out the background of the notifications and status bar. It will be added in a future software update released after the launch of the OnePlus 6. Look forward to sharing this new update with you all. Thank you for making us better!"

It's great that OnePlus is listening to its fans, even if it's a shame this isn't something that will be offered on the phone at launch. According to Lau, an update to the OnePlus 6 will come with the feature, but there's no telling how long after the phone's release we'll have to wait.

Information about the OnePlus 6 has been trickling out over the last few weeks. Leaks have suggested the phone will once again retain the headphone jack, and OnePlus itself has confirmed the name and a few of the specs. As expected, the device will include this year's top-of-the-line Snapdragon 845 SoC, with up to 8GB of RAM and 256GB of storage. It's shaping up to be one of the phones of the year, and judging by the increasing noise surrounding it we could see a release earlier in the year than the OnePlus 5, which came out in June 2017.