With the software improvements, I find myself liking the Ionic much more than I did when it launched. It's still not perfect, but I'm actually looking forward to what Fitbit can do with its future smartwatches.

No update is going to change how the Ionic looks, which is unfortunate. Tastes vary, but this is not an objectively attractive smartwatch. I know some people will like the design, and others embrace it for its quirky vibe. Personally, I don't think this looks like a $300 watch. That might be part of the reason Fitbit has been selling it at a $40 discount for a while now.

The Ionic is a bit on the large side for a watch, but Fitbit does understand a few things about wearable design from all its years making fitness trackers and almost-smartwatches. The Ionic has a convex bottom that keeps the sensors in contact with your wrist. At the same time, the band connectors point downward at a 45-ish degree angle. This makes the bands a bit more snug, even if you've got small, bony wrists as I do. 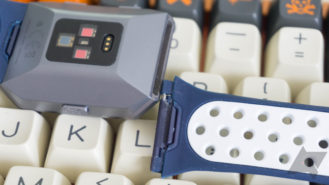 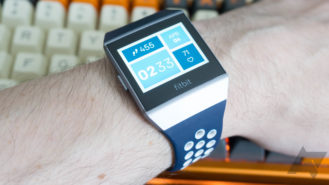 I was concerned about the band attachment clips when I reviewed the Ionic initially, but I will admit to being pleasantly surprised. I've swapped bands frequently while wearing the Ionic, and they still work perfectly. Nothing is broken, and they plug in just as tightly as when the watch was new. It also speaks to the popularity of Fitbit that there are so many third-party bands for the Ionic. With Wear OS devices, the chance of getting custom bands for a watch that isn't 100% standard is basically zero. Fitbit's band options are way overpriced, but many of the third-party options are as good for much less.

The Ionic's display still irks me. Making the screen rectangular with huge bezels was a strange choice for a smartwatch, and now the Versa has a different display shape. That means devs have to support two ratios for their apps and watch faces. The display is very readable outside, and there's a wonderful LCARs watch face that almost makes up for the bezels. I just hope Fitbit can minimize the bezels on future smartwatches—this is one of the things that makes the watch look cheaper than it is.

There's an NFC chip in the Ionic for mobile payments, but Fitbit Pay hasn't expanded very quickly. There are about two dozen supported banks, some of which are small local ones. None of my frequently used cards work.

I was somewhat shocked by the Ionic's so-so fitness tracking features when I reviewed it. Samsung's Gear devices seemed to work better. The Ionic would usually track workouts well enough, but it didn't recognize specific activities. As I scroll back through my old exercises in the Fitbit app, I can see a clear change in the quality of tracking over the life of this watch. It's gone from generic and inaccurate workout detection to dead-on every time. It can tell the difference between similar activities like running on a treadmill and using an elliptical. It also has GPS built-in, which the Versa does not.

You can still start specific workouts manually, and software updates make the process less arduous. I'm also happy to report the always-on display option for workouts works correctly now (but only for workouts). The "Today" fitness stats are easier to access as well.

Sleep tracking was sketchy for me on the original Ionic software as well. Now, it works flawlessly. The watch detects when I go to sleep—at least as far as I can tell—and recognizes when I'm up. It uses movement heart rate data to determine how well you slept with measurements of REM, deep sleep, light sleep, and awake time. Fitbit points to various studies and many nights of internal testing to promote the accuracy of its sleep tracking. It seems at least plausibly accurate to me, but I don't exactly have access to clinical equipment to verify that.

Performance and battery: A necessary trade-off

One of my original complaints about the Ionic stands: it's just not very fast. The entire interface seems a step behind as you swipe around. Leaving an app or settings screen feels especially sluggish as it always seems to take the watch face a second or more to reload. Scrolling animations are also stuttery and generally unpleasant. Again, this is one of those things that makes the Ionic feel like a much cheaper watch than it is.

While I might like the watch more if it were a bit snappier, I suspect that would affect battery life negatively. The battery life right now is fantastic—this is one of my favorite things about the Ionic. It seems to last even longer than the Versa—I can make it around five days without a recharge. It's refreshing to have a wearable device that doesn't need to be charged as often as my phone. After living with the Ionic (and Versa, for that matter), it seems silly to wear a smartwatch that gets barely a day of battery life, even if it's faster.

Software: I have concerns

Fitbit has been making wearable devices for years, but the Ionic was the first true smartwatch. At least, it was supposed to be a smartwatch. Sometimes, the software seemed a little less than "smart." I'm still not over-the-moon for FitbitOS, but the updates since I first reviewed the Ionic, especially the recent 2.0 update, have substantially improved this watch.

The decision to put the "Today" interface a single swipe away from the watch face was a smart one. With a fitness-oriented watch, you want quick access to your stats. However, I wish I could see more of those stats. The watch doesn't show you all your workout data, so you need to trust that everything syncs over to the phone. That said, the Ionic's synchronization is much more reliable for me than the Versa's. 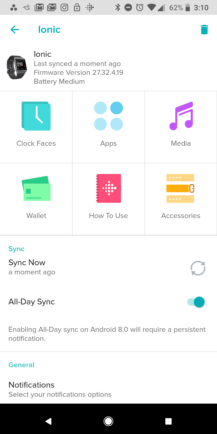 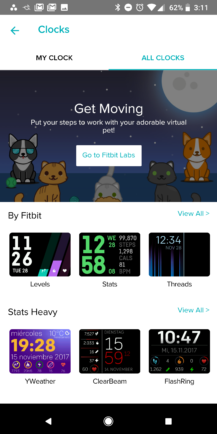 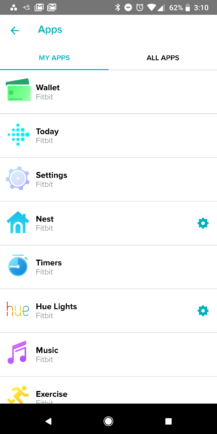 Developers might not have fully embraced FitbitOS, but it's doing better than I expected. There are a good number of basic apps, and there are a ton of watch faces. You can rearrange the apps on your watch's list, and as I just learned, the hardware buttons launch the first two apps in your list when pressed. I had assumed these shortcuts were hardcoded. Fitbit could do better making this feature known because it's extremely useful.

Despite the improvements, Fitbit's app gallery is still half-baked. There's no way to search the store, and the app doesn't keep track of apps and watch faces you download. Once you uninstall them (or switch to a different watch face) you need to poke around in the store to install them again. There's also no way to change watch faces from your watch. 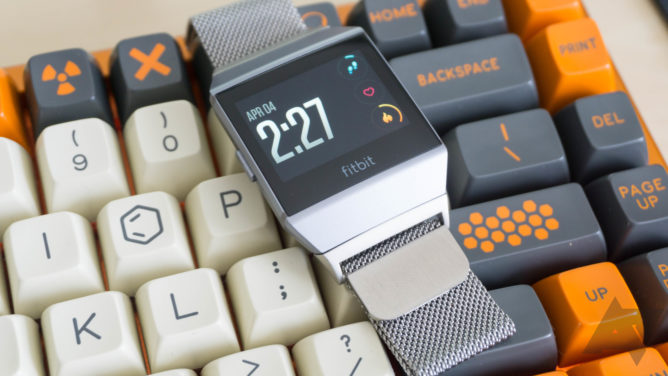 Notifications are one of my main use cases for a smartwatch, and the Ionic tries to check that box. It syncs notifications from my phone, but they are almost useless. The notifications don't remain bundled like they are on the phone, and scrolling through the list is so laggy. If you only get a few messages per day, you might be able to deal with this. However, the notifications themselves are too limited. You get a title (usually truncated) and a snippet of text. You can't take action on any notifications at this time. Fitbit says quick replies for messaging will arrive on the Ionic this May. That will improve things a bit, but I think Fitbit should throw it all out and start from scratch.

There is one thing about Fitbit's software that I absolutely love: switching phones is entirely painless. With Wear OS, you need to completely reset your watch and pair it with the phone. Samsung's watches are a little less annoying as they can do a partial reset to link up with a different phone. The Ionic doesn't need to do any of that. Just log into the app, and you're done. It'll find any nearby watches associated with your account. It's glorious.

The Fitbit Ionic is far from the perfect smartwatch for me, but Fitbit's trajectory in wearables is encouraging. Software updates have made the Ionic more reliable and capable without negatively impacting battery life. It has best-in-class fitness tracking, and the Android app is fantastic for checking out your health stats.

I'm still not in love with the Ionic's design, but I will admit third-parties have stepped up to release a ton of nice bands for it. The rectangular screen and chunky bezels make the Ionic look rather cheap, though. I hope Fitbit's future watches slim down the bezels and use a larger square (or even round) display. 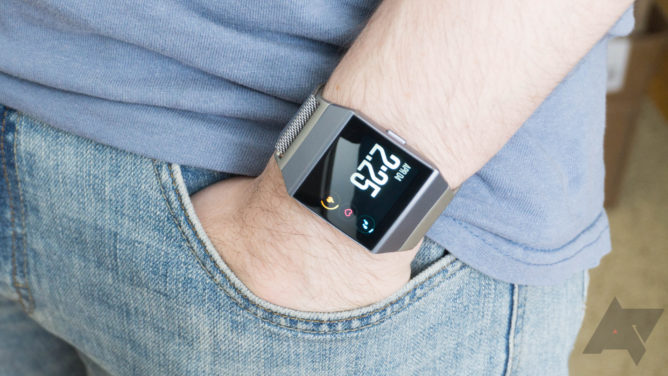 I don't use Wear OS devices much anymore. Even though the notifications are better than Fitbit's, they're not a dramatic improvement thanks to all the wonky changes post-2.0. Add to that I'm charging a Wear OS device every 20 hours, and I'm sort of over it. The Ionic has its shortcomings, yes, but it runs for the better part of a week on a charge. That makes it feasible to use for exercise and sleep tracking without planning my life around recharging the watch.

At this point, I'm excited to see where Fitbit goes with future smartwatches. Considering its rapid pace, I have more faith in Fitbit than Wear OS right now.

Taboola partners with ZTE to launch a news feed for smartphones (and you won't believe what ...