Bluetooth audio products take many forms at several price points, offering us the consumers multiple options to meet our respective needs. While some can go for the top-dollar, high-end items from Bose, others may need something under $100 or even $50. Affordable audio is potentially lucrative, especially when a customer can go find them at his or her nearest Walmart. Growing up, the only name of true note I knew in this particular market was Skullcandy, an edgy company set on providing decent-ish headphones and earphones that looked nice/cool, but didn't cost a whole ton.

Now we have come to another brand trying to grab the same type of consumer. Wicked Audio has an expanding product line of wired and wireless audio, all of which target different price and use case demographics. Today, I have the Endo, a pair of on-ear Bluetooth headphones under $50 ($44.99, to be precise). Unfortunately, the low cost and design are the only true redeeming qualities — even for something of this price point, I am disappointed. Poor build quality, a hollow, boring sound profile, and consistent-yet-unimpressive battery life all leave me with a sense of disatisfaction.

I urge you, dear reader, to look elsewhere for affordable wireless headphones. There are plenty of good options out there. 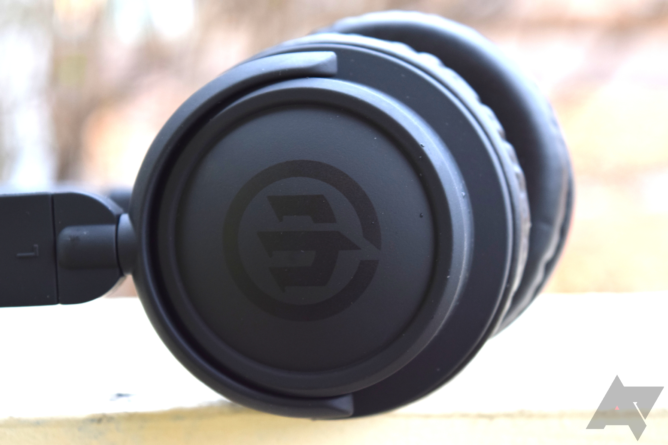 When talking about any pair of headphones under $100, build quality is often a top concern; it's one of the places where manufacturers tend to start cutting corners. It's not always bad, like in the case of the Phiaton BT 390, but this is the first place where the Endo represents the adage "You get what you pay for." Before we go down that road, let's take a moment to address these headphones' design.

The whole unit is a solid, matte black with Wicked's logo on either cup. The sleekness of the design helps to kill the edgy feeling when you say the company and product name. The Endo is rather unoffensive-looking, actually; it doesn't draw attention to itself or you. The microUSB charging port, call/playback buttons, power switch, and 3.5mm port are all on the bottom frame of the right cup. 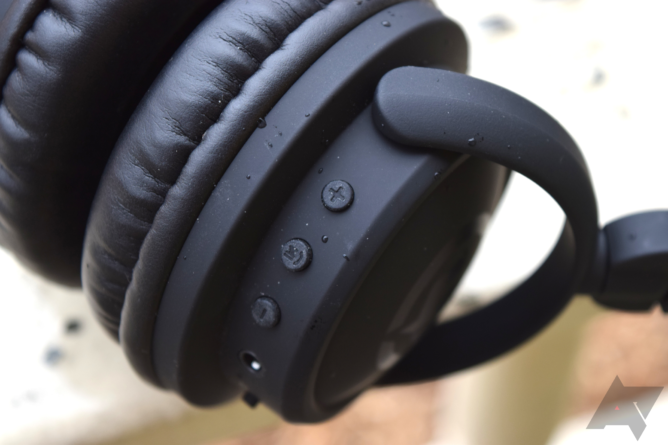 Now, back to the build quality. For one, the Endo is made of a cheap-feeling plastic, which is fine because there's nothing truly wrong with it. The real problems, however, lie in the hinges and the extensions in both arms. Since the Endo is technically "compact," in that it can kind of fold in on itself, the former is the most frustrating. There are two hinge points: one on the arms themselves that allow the lower portions to fold in, and another on the piece that holds the ear cups. Neither of these lock in place, meaning that the Endo just flops around when held and the ear cups never stay in place because they're constantly pivoting on their hinges. It reminded me of a very old pair of Skullcandy headphones (with the built-in, AA battery-powered subwoofer) after they had reached a very venerable age and started to flail about whenever I picked them up. Considering that the Endo is a good ten years younger, and brand new to boot, I was incredibly disappointed. Locking hinges improve the impression of quality of a product... who knew?

The other problem I have is that the arms don't stay in place after you've extended them. This means that either arm can become uneven, leading to an uncomfortable fit and an undeniable sense of frustration. While perhaps not the same solution as having the hinges lock in place, I can't imagine that fixing this issue is all that difficult. 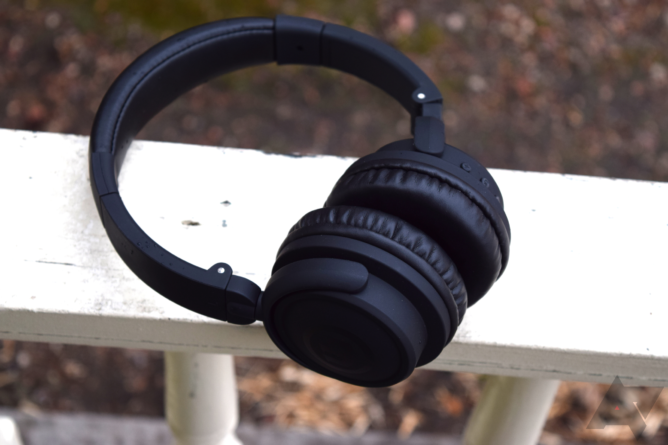 Moving on, comfort is another aspect to consider, especially with headphones. My problems with the on-ear type are well-documented by this point, but for those of you who don't know, I wear thick-framed glasses. These are normally fine, but when pressed under headphones that sit directly on my ears, discomfort is inevitable (headaches are not too uncommon, either). So I do not typically fault headphones for being uncomfortable in this regard.

However, thanks to the generally loose nature of the Endo, the ear cups rarely stay on. Whether they're fidgeting around on their hinges or the arm extensions aren't staying in place, I had more moments of the headphones falling off than I like. Even if they were staying on, I noticed that they were worse about sound isolation than other products of the same type.

No one expects affordable headphones to sound amazing, but surprises do happen. For under $100, I hold the Phiaton BT 390 to be an example of one of the better products. Wicked Audio did not manage to reach Phiaton's level with the Endo — the best that I can say is that the Endo's sound quality is just plain boring. It falls short of anything great. 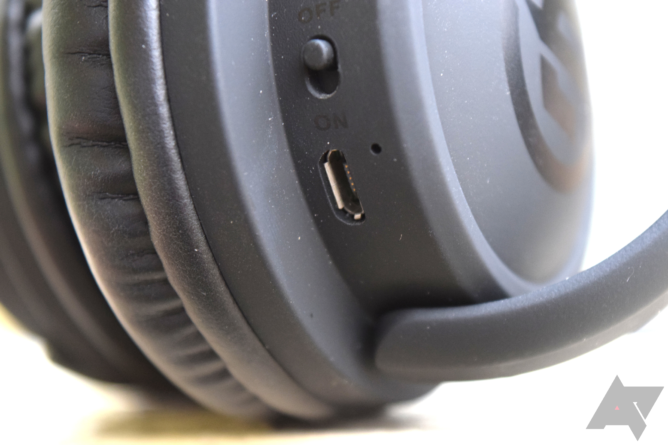 Hollow and unbalanced are some of the best descriptors for the Endo, though things improve slightly with the 3.5mm cable. The bass was too lean, providing no sense of depth to the various audio files that I tested (sub-genres of metal, EDM, synthwave, podcasts, audiobooks). Mids and highs sounded out of balance and poorly-tuned, giving a dull impression that persisted throughout the audio I tested. Again, the Endo isn't bad sound-wise, it's just plain boring.

Battery life is consistent, but nothing special. Wicked Audio claims that the Endo will go about eight to nine hours, which is fairly accurate, but after the thirty-ish from the BT 390, I was left disappointed. Although, following my last audio review, I have come to appreciate battery life consistency in wireless products, so the Endo has that going for it. 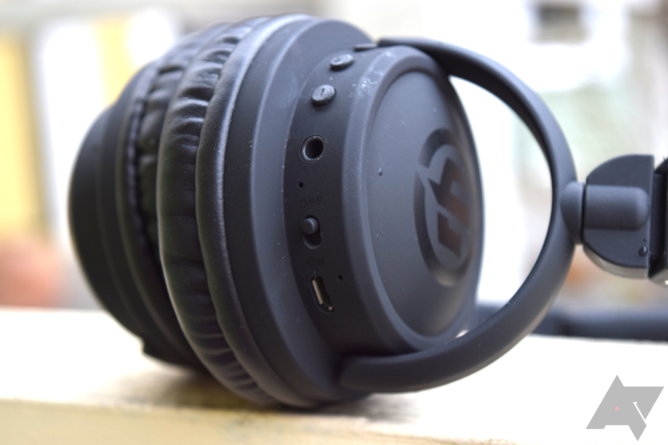 Eight to nine hours is about a week's worth of workouts for me, though I had to recharge the headphones halfway through because I also used them around the house and out on walks/bike rides; due to the issue of the Endo not staying on my ears and head, I decided that using it for running wouldn't be best. How much you can accomplish in that eight to nine hours depends entirely on how/when/where you use wireless headphones.

Wicked Audio Endo
6.5/10
design
7/10
build quality
6/10
sound
6/10
battery life
6/10
At just a tad under $50, Wicked Audio has an appealing product on paper. The Endo looks nice, has okay battery life, and supports both wired and wireless audio without breaking the bank — I certainly see the draw. However, the build quality leaves a whole lot to be desired and the sound profile is hollow, dull, and boring.

I suppose that some of that could be forgiven because of the price, but when there are other options that far outpace the Endo for just a little bit more money, it's hard to recommend what Wicked Audio is offering here.

I've mentioned it several times, but Phiaton's BT 390 is still the pair of headphones I would recommend for under $100. At $79.99, or $35 more than the Endo, you get triple the battery life, better sound, a more compact body, and superior build quality — even the battery life alone makes the BT 390 worth recommending over the Endo.

I respect what Wicked Audio is trying to do, and I understand some of the appeal of the Endo, but that doesn't mean that it is without fault or cut corners. It's hard to, in good conscience, endorse a pair of headphones that proved to be a disappointment from the moment I removed them from the box.

AT&T and Sonim announce the XP8, a $699 ultra-rugged phone for public safety workers