Over a year ago, Google added article recommendations to the New Tab Page on Chrome for Android. Even though it cluttered up the once-clean page, it has quickly become a major source of traffic for many websites. According to NiemanLab, traffic from Chrome's New Tab Page increased a whopping 2,100% last year.

The data comes from Chartbeat, a content intelligence company often used as an alternative to Google Analytics. According to the company, Chrome's 'Articles for you' (the recommended links) is one of the fastest-growing sources of traffic on the web. In the beginning of 2017, it drove 15 million visits per month across Chartbeat's network. By the end of the year, that increased to 341 million. 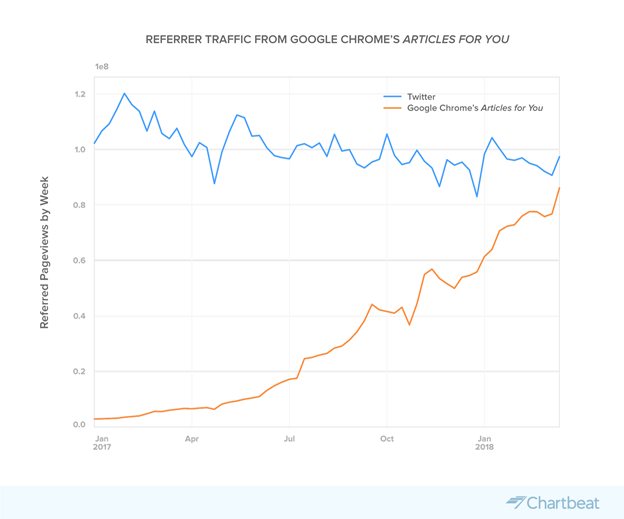 It's not hard to see why the recommended articles are driving so much traffic. Chrome is the most popular browser on the world's most popular operating system, and Google's algorithms are great at guessing what content you would be interested in. As you can see on the above chart, traffic from Chrome now almost matches traffic from Twitter.

Of course, Chrome's recommended articles are a double-edged sword. Much like recommended videos in YouTube, a proprietary algorithm determines which content is pushed to which users, and how it works (and what it favors) is anyone's guess. It will be interesting to see how this grows in 2018, especially if recommended articles make an appearance on the desktop Chrome browser.