Last year's Pixel 2 and Pixel 2 XL are some exceptional smartphones, but they didn't land without causing a few controversies. A number of early criticisms centered around the displays these two phones were using, complaining about possible burn-in, under-saturated colors, and an annoying blue tint. While none of these problems were so severe as to sink the fortunes of either model, Google still had to acknowledge that customers were upset, and we saw it reach out to do so by extending the manufacturer warranties of both phones from one year to two. While it's taken a long time to happen, now we're also getting confirmation of an extension to optional Preferred Care coverage.

When both the Pixel 2 and Pixel 2 XL initially went up for sale, the phones were covered by a one-year warranty. If you wanted coverage beyond that, you could purchase a Preferred Care plan (administered through Assurant) for an additional $129 that extended your protection out to two years, while also offering support from specialists and covering accidental damage (with a device-dependent deductible) in addition to mechanical failures.

But once Google made that two-year warranty change, what did that spell for Preferred Care? Sure, we still got the accidental coverage, but was the extended support for regular malfunctions now meaningless? 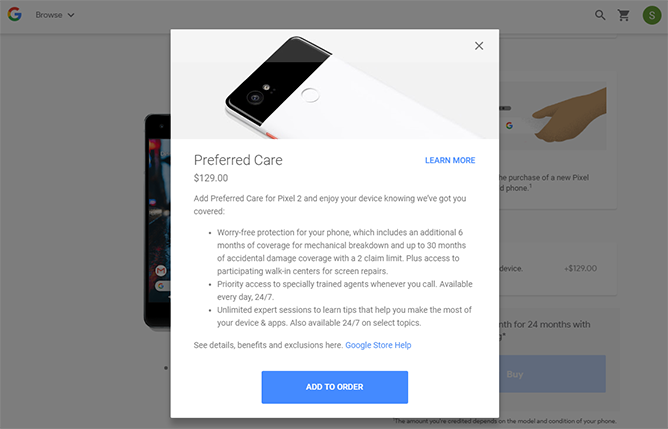 At the time, that sure appeared to be the case, and we saw Google spokes-accounts confirm as much in online forums. But time seems to have caused Assurant and Google to reconsider things, and this week Pixel 2 and 2 XL users with Preferred Care have been receiving notices confirming that their plans have indeed been extended.

Sadly, you're not getting a full extra year of support. But once the regular two-year Pixel warranty is up, your Preferred Care plan will now remain in effect for an additional six months. All told, that spells 30 months of protection, for both accidents and malfunctions. While we would have felt a lot better were this all cleared up back when Google initially extended the Pixel 2 warranty, we're still happy this resolution ultimately arrived.