Google Express sees discounts fairly often, but it's pretty rare to see credit being given away for free. But if you can say or type three words to Google Assistant, you'll be given $15 in Target credit for Google Express with basically no strings attached. 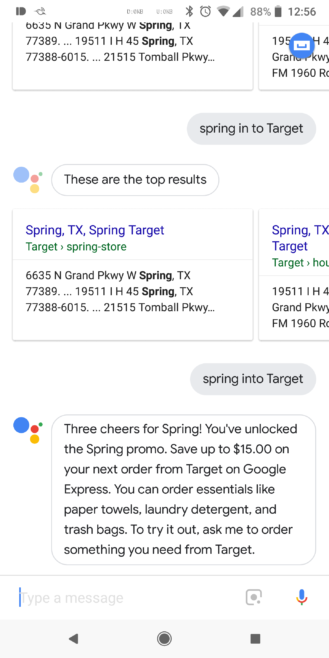 Using a Google Home, a phone with Google Assistant built in, or the Google Assistant app (on either Android or iOS), simply say or type, "Spring into Target." If everything goes as planned, you'll get a small paragraph informing you about the credit you've just received. However, because Assistant can get confused between "in to" and "into" as seen above, you may have to manually edit the voice entry to get your credit.

Once you've done that, you can use your $15 credit either online or through the Google Express app on Android and iOS. Any item added to the cart will cause the credit to appear; you'll just have to click 'Apply.' There's no minimum purchase required, though you will have to pay shipping for orders under $35. The credit must be redeemed by April 21st, and no other promo codes can be used in conjunction with this offer.

As many of you have pointed out, Google has already ended the offer. Womp-womp.

The deal is back! Multiple people on the AP team have been able to get their $15 in credit, despite being too late last time. Thanks to Joe Kester for letting us know.