It's been a rough month for Facebook. Following news that millions of users' personal data had been collected without permission by a third party, the social media giant caught some flak for the way it handled metadata collection on Android. In an effort to assuage public ill will, Facebook announced today that it's making user settings—especially ones dealing with account data and privacy—easier to access and more transparent.

Historically, Facebook's settings have been convoluted. By its own admission, prior to today's announced update, settings in the mobile app were "spread across nearly 20 different screens." In a blog post, Facebook says it's cleaned up the settings section to make it easier to understand; the changes also emphasize users' control over their data and privacy. "Most of these updates have been in the works for some time," Facebook says, "but the events of the past several days underscore their importance." 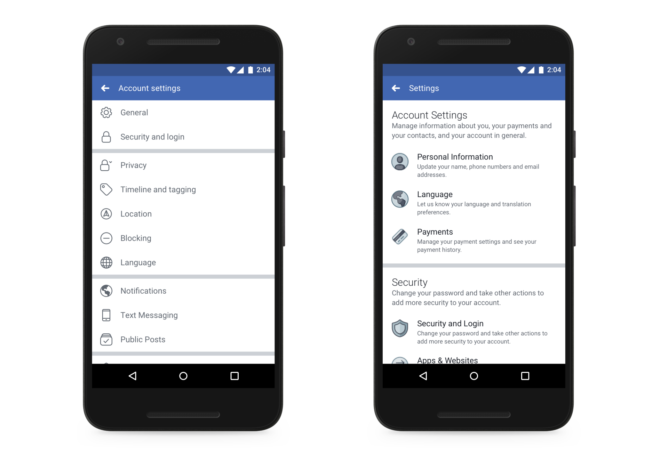 Facebook settings as they appear before (left) and after (right) recent changes.

It'll likely take more than an overhaul of app settings to solve Facebook's privacy problems: Reuters reports that three users are perusing a class action lawsuit against the company over the Android metadata kerfuffle, asserting that their privacy had been violated by Facebook's collection of their call and text logs. Facebook had previously issued a statement assuring users that their sharing of the data the lawsuit pertains to is strictly voluntary and can be stopped at any time.

[Update: It's back] Free alert: Get $15 in Target credit via Google Express just by saying ...