But in a world where differentiating your smartphone in a meaningful way is getting harder by the year, Huawei is still doing innovative things. 'SuperCharge' fast charging technology charges the P20 Pro's 4000mAh battery extremely quickly. Its in-house HiSilicon Kirin 970 chipset is well-known for being a good performer. EMUI 8 is Huawei's best take on Android yet, and while I wouldn't exactly call myself a fan, it seems perfectly usable. And, of course, the P20 Pro's new triple-camera array is the centerpiece of any discussion around this phone - it's genuinely technically impressive.

Did I mention these phones are super pretty? These may be the most elegantly-designed smartphones - from the back - that I've ever seen. The greenish-blue finish on the P20 Pro, in particular, is just stunning. So, why can't I help but feel like the P20 siblings leave me wanting just a bit more? I think I'll need a bit more room to explain.

What separates Huawei's new P-series phones? I'll break it down really quick for you. 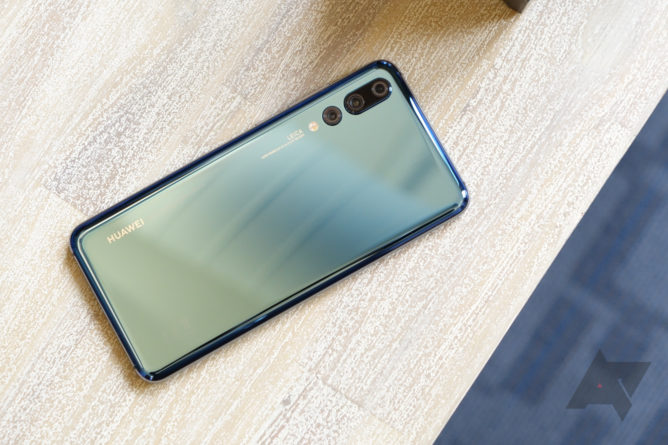 The P20 Pro is equipped with a 6.1" 1080p OLED screen, IP67 waterproofing, a three-camera system including a telephoto lens with OIS alongside the standard RGB and monochrome sensors, and a 4000mAh battery. It has 6GB of RAM and 128GB of storage. 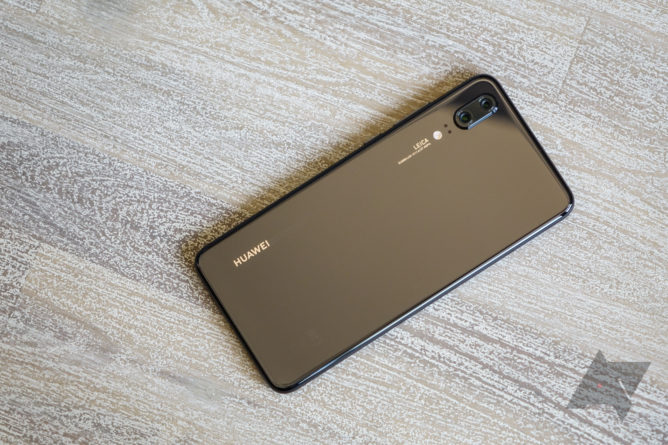 The P20 has a smaller 5.8" 1080p LCD display, no waterproofing (it's IP53 - basically a non-rating), a dual-camera system (not even the same sensors as the Pro), and a significantly reduced battery capacity, at 3400mAh. You get 4GB of RAM and 64GB of storage on the standard P20.

The P20 will be available in some colors the Pro won't, but other than that, those are the key points. Huawei definitely positions the Pro with a substantially better set of features - this isn't just about size. The fact that the standard P20 lacks much of any waterproofing also came as a bit of a surprise to me, personally. So, let's move on to more subjective assessments.

Get past the absolutely gorgeous exterior of the P20, particularly the rear cover, and you're left with the notched display: the window into the phone. 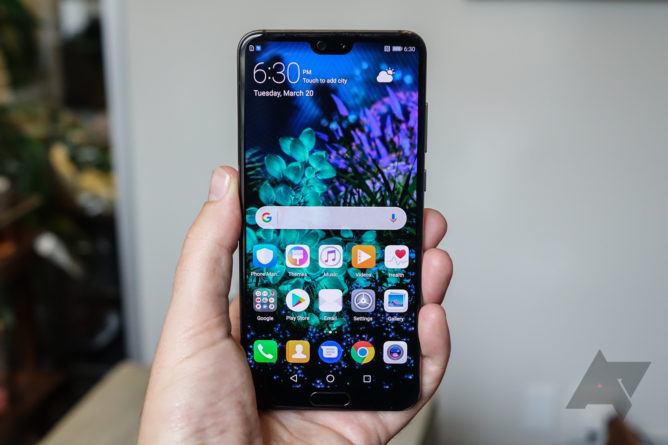 If you're going to do a notched display - which I am fine with! - having a chin on the bottom of the phone just feels silly. You get all of the awkward interface interruption without the striking borderless effect that actually makes the notch acceptable. The reason some notched OLED phones have chins has to do with the way the OLED panel's controller must be "rolled" under the chin of the phone to achieve the bezelless look. It's complicated, and thus probably expensive. Huawei apparently decided not to do that, and so: chin. 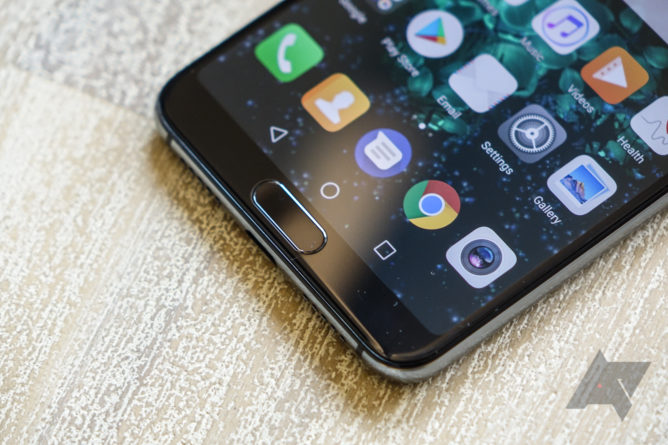 I also didn't get the sense that the P20 Pro's OLED screen looked particularly amazing. Could this be an LG OLED panel? I didn't spend enough time with the phone to tell, but the standard P20's LCD looked even less impressive by comparison. Screens have never been Huawei's strong point, and it was hard to tell in the light we were working with, but I just didn't get the sense it was a great display.

And as to what's on the screen? Huawei's latest version of EMUI, 8.1. I've never accused EMUI of being especially attractive, and while this is the closest Huawei has ever adhered to "stock" Android functionally, it still definitely isn't stock. To name a couple nuisances, Huawei uses its own form of background power management and doesn't allow notification actions from the lockscreen - little things that just kind of irk me. I realize many people may not care, but hey, to each their own. 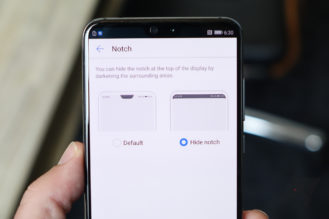 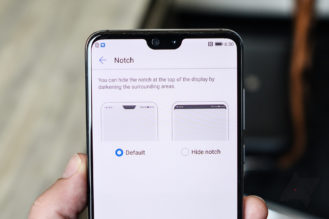 You can turn the notch "off" if you want.

One thing I think is objectively more annoying is that while Huawei's most recent phones are fast, they just don't feel as smooth or jitter-free as the Pixels. Even compared to Samsung's Galaxy S9, the P20 Pro just felt a little less well-optimized. I'm sure it opens apps plenty fast, but the smoothness of scrolling and responsiveness of the touchscreen just didn't impress me. I get the same kind of feeling with the Mate 10 Pro, which has a very sped-up quality to it.

And then finally, there's the camera app - quite possibly the most cluttered, confusingly laid-out piece of software I've seen on a phone since Snapchat. Huawei simply has far too many modes, options, and gestures in this application. It's an absolute train wreck. 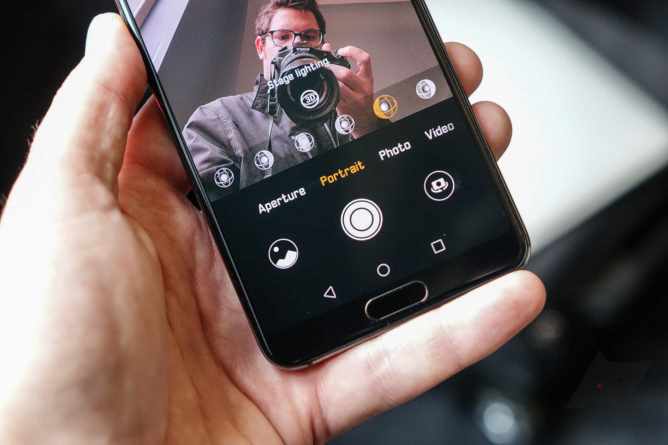 Huawei's camera app has stage lighting (it's bad)... among about a million other features.

Trying to find the P20 Pro's new ultra low light "long exposure" mode - which had to be activated manually on our test devices (Huawei says it may become easier to activate later) - was legitimately annoying. Want to force HDR on for a photo? You need to swipe left three times in the main camera UI, hit the HDR button, then take a photo. When you return to the camera app, you're back in auto mode, and have to repeat the same steps again to shoot in HDR. This was how smartphone cameras worked five years ago, Huawei. Nobody has time for this.

So, about the cameras 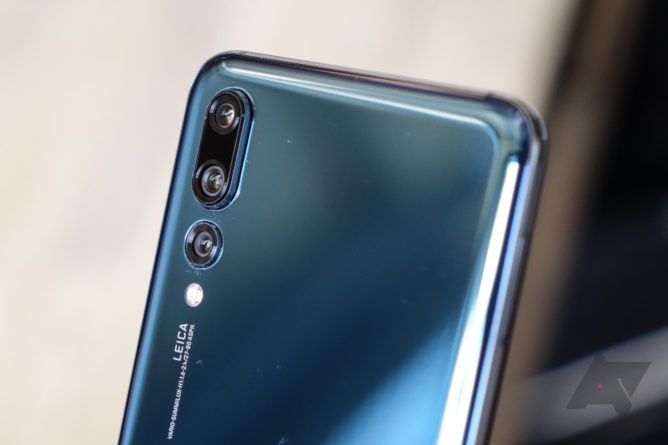 Are they actually any good? We didn't have time to test them in any meaningful way, but the P20 Pro's 40MP RGB sensor is apparently massively larger than anything this side of Nokia PureView or Lumia 1020. It shoots at 10MP resolution by default, and uses the 20MP monochrome sensor to aid in sharpening and providing dynamic range, as the array on the Mate 10 Pro works. Huawei says because of the dual system and the massive sensor size, there's no need for optical image or video stabilization (results will be the judge of that). The 8MP telephoto lens does, by the way, have OIS, and an effective 3x optical zoom factor. 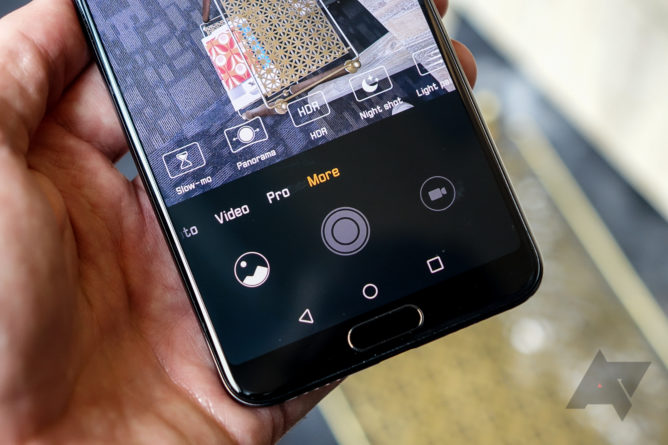 For low light, Huawei claims the P20 Pro will best all comers, and maybe in some circumstances, that's true. In the demo Huawei conducted, I didn't leave nearly as convinced. In a dim room, we were told to use the "long exposure" night capture mode that uses multiframe composition to create an image that should have much better dynamic range, lower noise, and more even exposure than a typical smartphone. What I found was that Huawei's demo just showed how insanely aggressive the capture mode's image processing is - it turned dark shapes into black paint, and while edge detail was sometimes impressive and noise very low, the resulting image just looked fake. My Pixel 2 XL captured the scene with substantially greater detail (I bet a Galaxy S9+ would do even better), even if did have more noise. 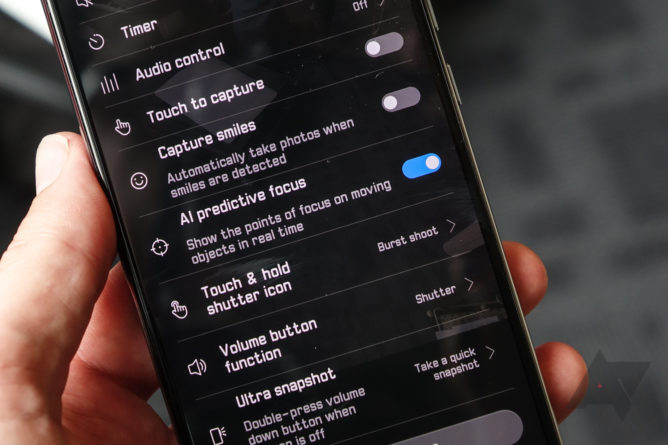 Huawei has always talked a big game on camera, and while the Mate 10 Pro does have excellent imaging capabilities, the company has never quite achieved the performance of the big boys in this space. Maybe the P20 Pro needs more tuning, and I definitely would like to spend more time with it, but for now I'm a bit skeptical of any truly grand claims Huawei makes about the cameras. The hardware is absolutely, eye-wateringly exotic and powerful, don't get me wrong. But the one experience I actually had with the camera ended up validating a gut instinct: Huawei is overselling it. And maybe it is, or maybe I'm wrong - we need more data.

Good, but greatness remains a question

Here's the thing about the Huawei P20 and P20 Pro. They're gorgeous, high-quality smartphones that will probably have outstanding battery life and reasonably competitive cameras. And battery life is undoubtedly important, I get it. But Huawei's software, for as far as it has come, continues to be one of the main reasons to avoid its products. The aesthetic is, at best, divisive, but Huawei's various tweaks and certain unavoidable apps - like the disastrous camera - just drive me insane after more than a few days. It's like Huawei does not understand the meaning of the word "clutter."

That said, I realize my concerns here are more personal than professional. My overall assessment? I think the standard P20 is pretty boring, and I don't really get Huawei's play here. Its lackluster LCD display, omission of waterproofing, and substantially smaller battery are all head-scratchers for me. The P20 will cost less than the Pro, but it will definitely not be cheap. As such, it feels like Huawei shortchanged it far too much when compared to the Pro model, even before considering the cameras. Maybe this phone makes more sense in China? But it hardly warrants comparisons with similarly-positioned iPhones or the Galaxy S9. I'm inclined to disregard it right out of hand.

The P20 Pro is where anyone who's actually interested in what Huawei's doing here is going to go, and for good reason - it ticks off the major boxes. A really big battery, waterproofing, a unique and innovative camera system, and a modern OLED display put it on far more even footing with rivals like the Galaxy S9+, iPhone X, and Pixel 2 XL. The battery is larger, it has more cameras (and inarguably, more interesting ones), faster charging, and a design that'll make you do a double-take. As such, I think it really does earn a seat at that table - at least in theory.

In practice? I'd have to use one for a while to tell you. And I'd like to, if Huawei wants to give me one (hint hint). 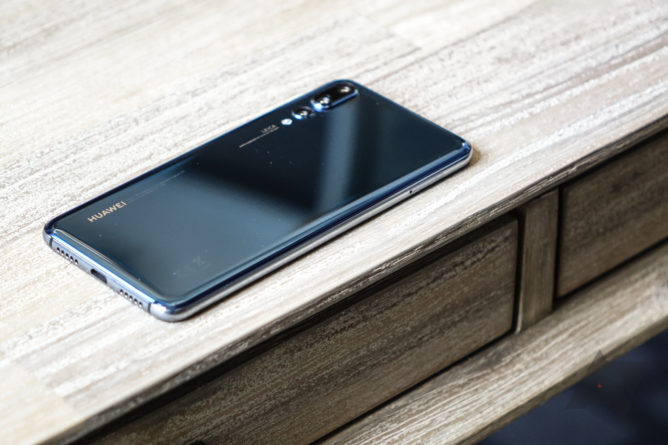