It's been almost three months since Android Pay was replaced by Google Pay, but the new name still sounds so foreign. In an attempt to alleviate that and introduce more users, Google is running a promotion in which you and someone you refer both get $10 in Play credit once the referred party makes a purchase. Bear in mind that this promo is still running (and ends at the same time). 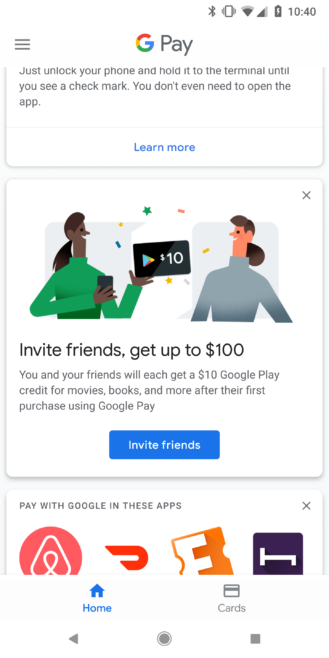 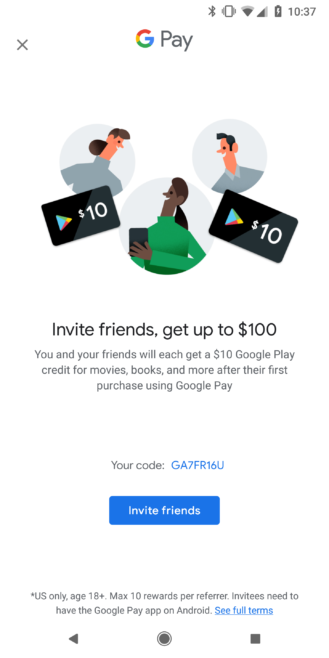 This offer, which actually began back on March 15th, is showing up within the Google Pay app's feed. Tap the 'Invite friends' button and you'll see your code (mine is GA7FR16U), as well as another 'Invite friends' button that opens your share menu. Each time you refer a friend who has never used Android Pay or Google Pay before, you and he/she will both receive $10 in Google Play credit once the first Google Pay purchase is made by him/her. You can do this ten times for a maximum reward of $100 in Play credit, which you can use to purchase this 'I am Rich' app.

The promotion is valid in a number of countries, including the US, the UK, Canada, Australia, Poland, and Russia (though you have to spend it on some ozon.ru store there and the limit is five referrals). Obviously, the currency will vary by whichever country you're in, but the value should be around $10 everywhere. You have to be 18+ to participate, and the offer will end on May 14th. Bear in mind that you'll have 28 days to redeem your Play credit after you receive it, after which point it'll disappear forever.