However, thanks to a plague of battery life disappointments, delayed responsiveness from Alexa, design flaws, and subpar sound quality, the OnVocal OV is an exercise in futility and frustration. I love the concept of the product, but the execution is immensely flawed.

So, dear reader, buckle up, strap in, whatever — it's going to be one of those reviews. 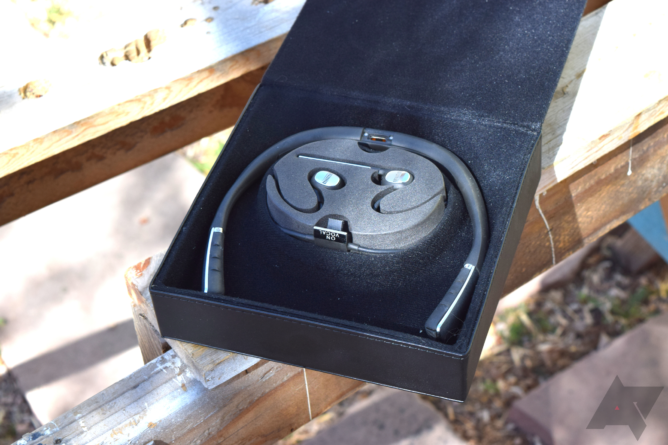 At first glance, I liked the design that OnVocal used with the OV. While neckbuds are not the most attractive wireless audio form factor, they are practical because they stay out of the way. Earbuds are often more comfortable for me due to my thick-framed glasses, which cause problems with both on-ear and over-ear headphones.

The OV looks very nice, with a soft touch rubber coating, stainless steel accents, and an OnVocal logo LED that lights up when charging. Three buttons sit on the top end of either arm, each providing a strong, tactile response when pressed. At the tip of the left arm, under a stealthy cover, is the microUSB charging port; under the end of the right one is the headphone jack into which plugs a 3.5mm aux cable (one is included in the box). Overall, I thought that the OV had a premium look, feel, and weight to it. The call/non-Alexa assistant button on the right bud is strangely placed, though; it takes a rather firm press which then pushes the unit further into the ear. This can get uncomfortable. 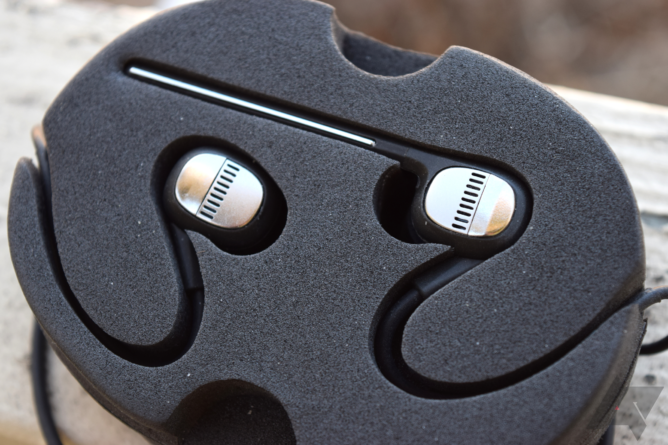 For sound delivery, the OV has cables that curve over the ear to keep the buds in place. It's a good idea, though it can be frustrating to get the buds in your ears. The cups are a memory foam that is both comfortable and secure, something that I wished I saw more often. While the left bud is normal, the right is where we find the first of the design oddities: the microphone.

Like the Bluetooth headsets of the late 2000's and early 2010's, the built-in mic extends out from the bud about five centimeters/two inches down the jawline. It's the same dark grey as the rest of the device, but it has a stainless steel "pinstripe" going down the length of the extension, drawing further attention to it. Not only does it look ridiculous, but I felt like a complete tool while wearing it — my wife said so in no uncertain terms.

The second oddity is that the earbud assembly disconnects from the main body via a central proprietary port. It leads to some lovely presentation in the included protective case, but I otherwise see no reason for this; the OV does not have any speaker system as an alternative to the earbuds. 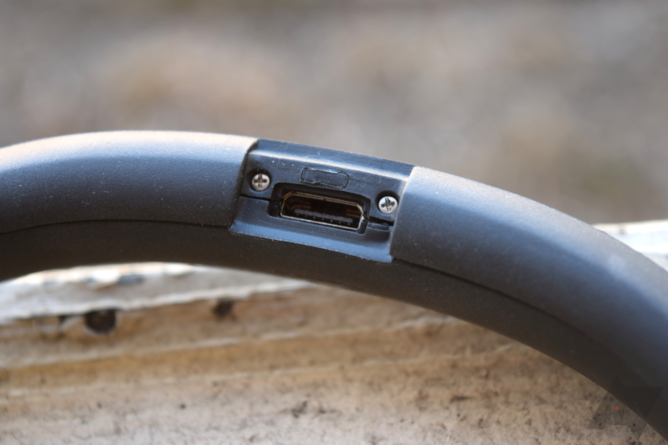 Worse than either of these oddities, the biggest flaw in the OV's design is the size of the main unit. While most neckbuds curve down to sit comfortably on the neck, the OV is short and stubby, resting instead on the slope of my shoulders. This means that if I move my arms at all, especially forward or backward, the OV slips off and yanks the buds out of my ears. Think of it like if you lie down on your back while wearing normal neckbuds and sit back up (the main reason why I don't wear them at the gym), except this happened anytime I adjusted my shoulders.

This design is one of the worst that I have seen for a product of this type; OnVocal should be ashamed. The OV is the first audio device that I couldn't use or wear unless I sat completely still (which I never do). Hurting my ears and head due to a conflict with glasses is one thing, but a neckbud band that doesn't even fit around my neck is quite unacceptable.

Aimed at business professionals, OnVocal touted the OV's sound quality at launch. I was admittedly dubious, but I had high hopes for what my ears would hear after I finally got the buds in. The best that I can say is that I was quite disappointed, and I was surprised at the relative height at which I had placed my expectations going into this review. 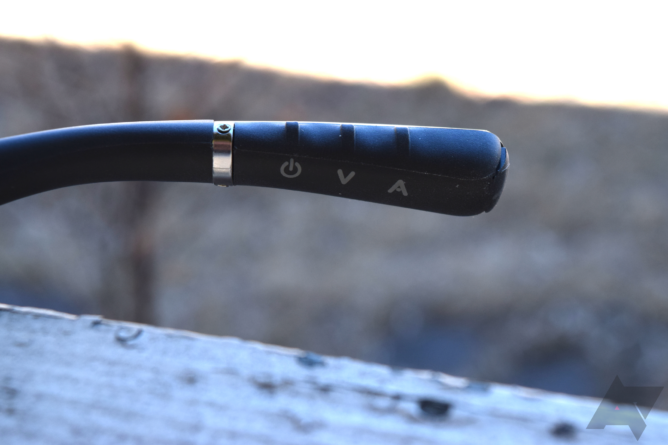 The OV sounds fine, but nothing spectacular. I have heard better sound quality out of earphones before, but I (and all of you reading) have heard much worse. The main problems here are the bass and highs, or lack thereof in the latter's case. Lows are very weak, noticeable especially in spoken voices like in podcasts and talk shows. Highs, on the other hand, vanish beyond a certain point, leading to a lackluster sound profile.

Mids are tuned decently well. While nothing problematic, they are uninspired and listless, furthering the mediocre, boring sound quality. The lack of EQ options in the app is also annoying, but we'll get to that in a bit.

OnVocal claims that the OV gets about eight hours of battery life, which was a gross overestimation in my use. I got close to that number with no Alexa queries, all ambient noise disabled, and low volume. Normally, however, I managed to get between five and six hours, though one instance netted me four. Talking to Alexa really brings the battery to its knees. 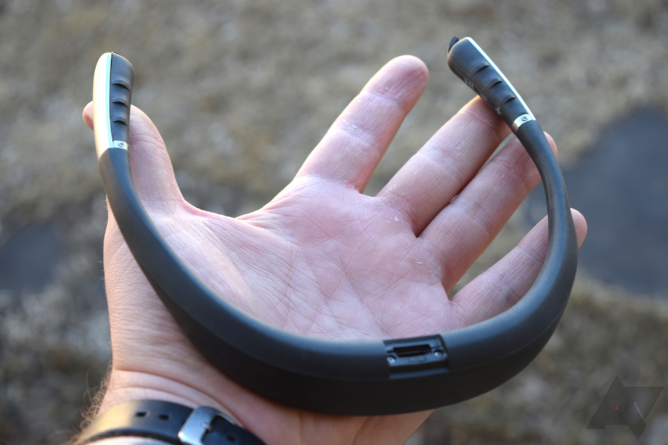 No one charge was ever the same — the wild inconsistency was irritating, often leaving me wondering if the unit would have any life left when I pulled it out of my backpack, or how long it would last if so.

In order to use the OV, you must install the OnVocal app. It's serviceable, providing you with access to volume controls, signing into Alexa, and offering multiple custom sound profiles for different scenarios after you log in or create an account. The design feels a bit out there, but I did not have any random crashes, sluggishness, or other problems on any of my three test devices.

The header image is some random photo that doesn't make any sense or fit in at all, but this seems to be OnVocal's modus operandi. Battery status is displayed below the image, along with the option for settings, reordering your profiles, and adding new ones. The main screen of the app houses those profiles; OnVocal includes five to start out with. 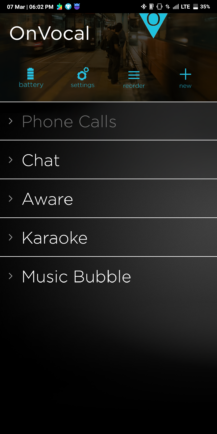 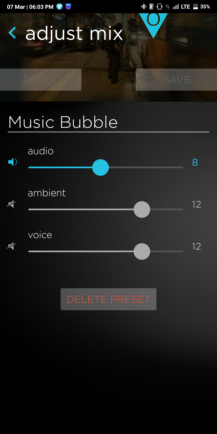 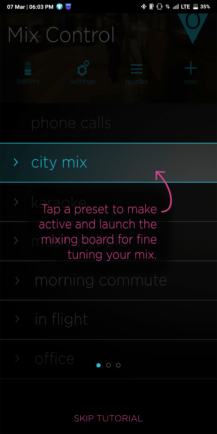 Tapping on an entry opens the tuning settings. This is where you get to choose the volume levels of the audio playing on your phone, the ambient noise (which allows you to hear what's going on around you, such as people talking to you), and the voice (how loud Alexa, Assistant, and Siri are). While all of this is nice and all, the total lack of any EQ options is disappointing — this is a major lost opportunity on OnVocal's part.

In regards to Alexa, she behaves as you would expect, mostly. I had two problems, though: 1. there's a delay before Alexa is ready for your query, and she takes a few seconds to process and respond, and 2. using Alexa in public is incredibly awkward. Whereas people have somewhat grown accustomed to others talking to their phones and watches, speaking to what seems like nothing draws weird looks. It's funny, since Bluetooth headsets have been around for a long time now.

The novelty of having Alexa in my ears wore off very quickly after the growing frustration from the response delays and the noticeable impact on battery life — yes, it's definitely cool to turn on my lights from my headphones. But considering that Amazon's personal assistant is the highlight of the OV, I'm disappointed in its execution. OnVocal talks a big game about the OV and most of it is just that: talk. In reality, these headphones present subpar and boring sound quality, inconsistent battery life, and a price tag that far exceeds what anyone should pay for this product. At launch, the OV cost $400, but since then, the company has lowered that to $200.

When talking about wireless headphones, one of the biggest problems that anyone will find is battery life that is unpredictable. I, like many others, have built a sense of trust with most of the audio products that I use on a daily basis. If my gym earphones, for instance, tell me that they have half of their battery left, I know that's good for another couple of workouts. When the OV told me that it was sitting at 50% remaining, I couldn't tell how much longer I'd get out of it. That is incredibly frustrating.

As I said, the concept is definitely neat, but like the Pixel Buds, the OV does little to improve the wireless (or wired) audio experience — rather, it detracts from it. And when asking even $200, let alone $400, that's just not acceptable. We've seen that throwing Alexa in weird places can actually be kind of fun, but the accompanying product has to do its basic function(s) well in order to be worth recommending.

OnVocal failed in that regard. Review: Satechi's 75W charger has USB-C PD, Quick Charge, and extra ports to keep all your ...