A new version of Google Maps came rolling out super-late last night. While there are a few changes to note, this one looks like it may be one of the quietest of updates for the Maps app in a long time. There are a couple of basic cosmetic adjustments to discuss, plus a short teardown. As always, we're still looking for more changes, so let us know if there are any other interesting features that deserve attention.

There don't appear to be any major changes to the UI or functionality in this update, but there are a couple of basic cosmetic tweaks to call out. 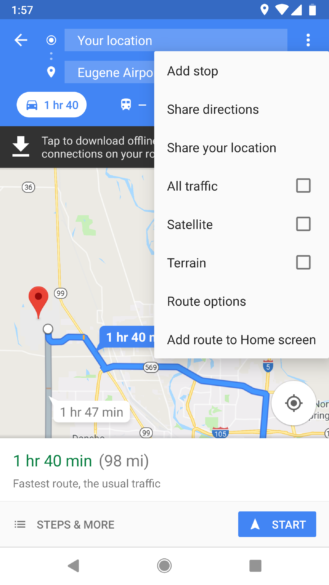 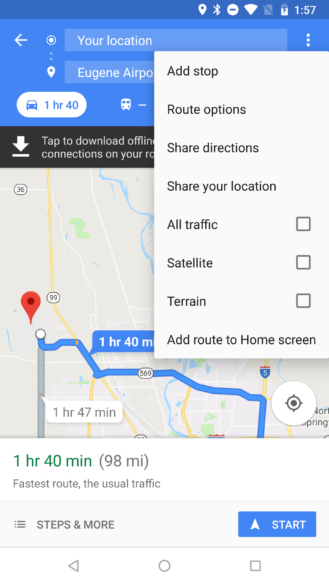 The overflow menu in the navigation screen was reordered a bit. You can now find the 'Route options' command sitting near the top of the menu (in 2nd place) rather than lurking practically at the bottom. If you actually hit this frequently, it's time to retrain your reflexes.

The search bar was also quietly updated in the last few days, switching it over to rounded corners and centered hint text. Google triggered this change remotely, and it's not limited to the most recent version of Maps. I'm seeing it at least as far back as v9.72.

Follow-up: Food ratings grow to include products and activities

Back in January, we came across some clues that suggested users might begin recording details about individual food orders they had gotten from a restaurant. The whole thing sounded a bit like leaving reviews for individual dishes; it would ask users for the price of a dish and if they would recommend it, and tried to link this feedback with photos.

In the latest update, an interesting thing has happened: This feature, which still hasn't gone live, has grown beyond just menu items to also ask about activities and other products. Basically, users will be able to give their thoughts about almost anything that a business might offer, whether it's food, a service, or something else off the shelf.

*Note: There were already strings for food items, but the two sets for activities and product names are new.

For easy reference, here are the rest of the related strings, which are mostly generic enough to be used with food, activities, or products, but a couple are still basically exclusive to restaurant orders.

The scope of this feature is the only thing that's really changed since it was first discussed, and the details remain basically the same. It will be interesting to see the Maps team integrate granular reviews of this type into the interface. Some other competing services support granular reviews on individual food items, but I can't recall any that encourage the same scrutiny of other services and goods.

I don't want to spend a lot of time on a change that's likely very trivial, so I'll just breeze through this one. It looks like the video player might get a maximize button. The basis for this is a group of new lines which cover features that mostly already exist in the video player, like play/pause and muting the audio. The maximize button is the only thing mentioned that doesn't have a specific interface element on the screen,

Of course, all you have to do to fill the screen with a video is to rotate your phone to match its orientation. This is probably just a button to force that behavior, just like the one found in the YouTube app.

... Yeah, I've already written too much about this one. Let's move on.

Since this is shaping up to be the shortest post about Maps in a long time, I'll throw in one quick hit regarding new promo cards. One will appear if your web and app history are turned off, and the other will focus more on search history and access to your contacts. In both cases, it will point out that you could use additional information to improve or speed up your searches.

Deutsche Telekom makes preloaded bloat optional, speeds up firmware updates by getting them ...