Generally speaking, updates remove bugs, but in the case of Google's 2016 Pixel XL, a new problem was introduced with the Android 8.1 update this January. When charging in certain circumstances, the OG Pixel XL will (dangerously) attempt to pull up to 40% more current than it has negotiated from the charger, repeatedly entering and leaving a charging state as the charger shuts off due to overcurrent protection. So if you've noticed your Pixel XL recently flashing "charging rapidly" multiple times after being plugged into the stock charger, that's why.

At first glance, the specific circumstances required to trigger the problem might seem unlikely, but if you're using the stock charger, they're guaranteed. All that's needed is a USB-C PD-compliant charger of the correct wattage (like the stock charger) and a sufficiently drained battery. When the Pixel XL is plugged in, it will negotiate with the charger to pull up to 18W (9V/2A), but in reality, it will attempt to draw up to 25W (9V/2.8A). 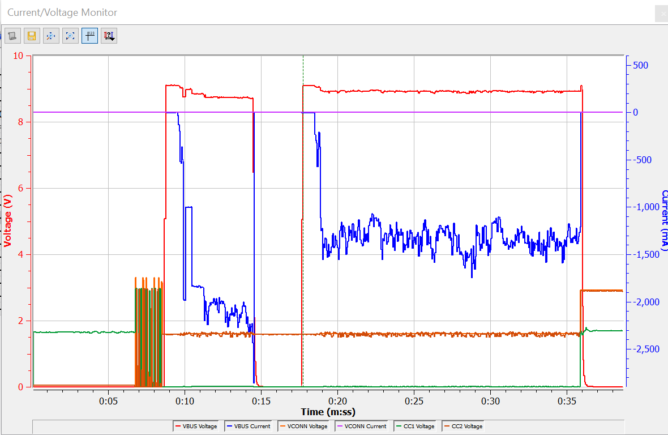 A close-up of this image provided in the Issue Tracker. It can be difficult to parse, but see how the blue line for amperage nearly hits the bottom of the graph (over 2.8A) at 14s.

I have suffered from this issue myself over the last few months, and with the addition of charging sounds in the Android P developer previews (in which the problem is still present), it's become even more noticeable with repeated "dings" at connect/disconnect each night. But not everyone at Android Police has experienced this behavior with the phone. While it's possible that not all devices are affected, the specific charger configuration required to trigger the problem might be one explanation for the difference in experience.

The originator of the support thread speculates (with some supporting evidence) that the problem stems from faulty battery charge controller logic introduced with the Android 8.1 update.

The bug was initially reported to Google's Issue Tracker back in January, and almost two months on it doesn't seem to have been resolved. Considering that an overcurrent situation like this could be dangerous with a poorly engineered charger, that's not really OK. We've reached out to Google for comment, and we'll update this story if we hear back. In the meantime, 2016 Pixel XL owners may want to make sure they stick to known good chargers with overcurrent protection, like the stock one.

On one of the support forum posts related to the issue, Google's head of Safety and Compliance Engineering for Google Consumer Hardware delivered the following comment, which we were provided in lieu of a statement:

Thank you for submitting information on this bug. Our engineering team has verified a fix that will be rolling out in the coming weeks to prevent this from occurring.

Tests run by our safety engineers have also confirmed that even if a momentary overcurrent draw of the kind described were to occur in normal-use conditions, it would not pose a safety hazard. In addition, Pixel XL was designed with multiple layers of safety protections to further prevent overheating:

It sounds like Google is taking the issue seriously. Though it might have taken public attention to get a fix, at least one is coming, even if Google is trying to diminish the perceived danger of overcurrent situations. The danger, in this case, results from using chargers that may not have adequate or correctly-implemented overcurrent protections—a situation none of Google's safety protections, in this case, mitigate.

As before, be careful with the charger you select until this is fixed.