There aren't a lot of people that get excited about sprinkler systems, but with how much we dig on smart home hardware, we're some of them. That's why we're excited to announce that Rachio has just announced its third generation automated sprinkler hardware. The new Rachio 3 Smart Sprinkler Controller improves on the 2nd generation model by adding upgraded hyperlocal weather, dual-band Wi-Fi support, easy-press connectors for seamless installation, extra hardware controls, and compatibility with the new Rachio 3 Wireless Flow Meter. It'll run you (Update: now $229) for a limited time, and pre-orders are open today.

Rachio is a big name in smart sprinklers—the company just secured an additional $10M in Series B funding, in fact—and our own Artem nerds out on the details of his sprinkler system the way some people do about their car or computer. As someone who rents rather than owns, I don't get much use from sprinklers myself, but I can see the appeal. Especially if you live in a drought-stricken area where you could be concerned about over-watering after rainy days. 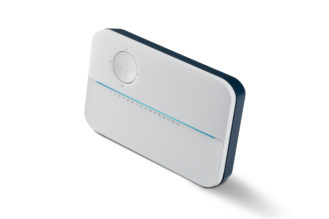 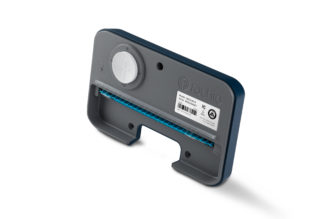 Thanks to the hyperlocal Weather Intelligence Plus in the new Rachio 3, your sprinkler system will be even more accurate in determining when to water, helping save both the environment and money on your water bill. "With more than sixty percent of residential water waste in the United States occurring outdoors," says Chris Kine, CEO of Rachio, "our new products empower consumers to be smarter with water, so they don’t have to choose between conservation and easily maintaining a beautiful landscape.”

We asked Rachio for a bit more details about the hyperlocal Weather Intelligence Plus, and if it might be coming to the earlier generation models. So far, Rachio doesn't have any plans to do that, but it hasn't ruled it out. The hyperlocal weather obviously can't precisely determine what the weather is at your home (unless you have a public weather station), but it's able to take into account available data nearby to get a much better idea, rather than just sticking with a single source.

Like the company's previous smart sprinkler controllers, the Rachio 3 is cloud-connected so you can control your watering schedule even away from home. And the new easy press connectors will make for easier installation, in case you aren't too handy. Dual-band Wi-Fi support is probably overdue considering most smart hardware these days supports it. Living in the city, it's pretty much 5GHz or nothing, given the congestion. 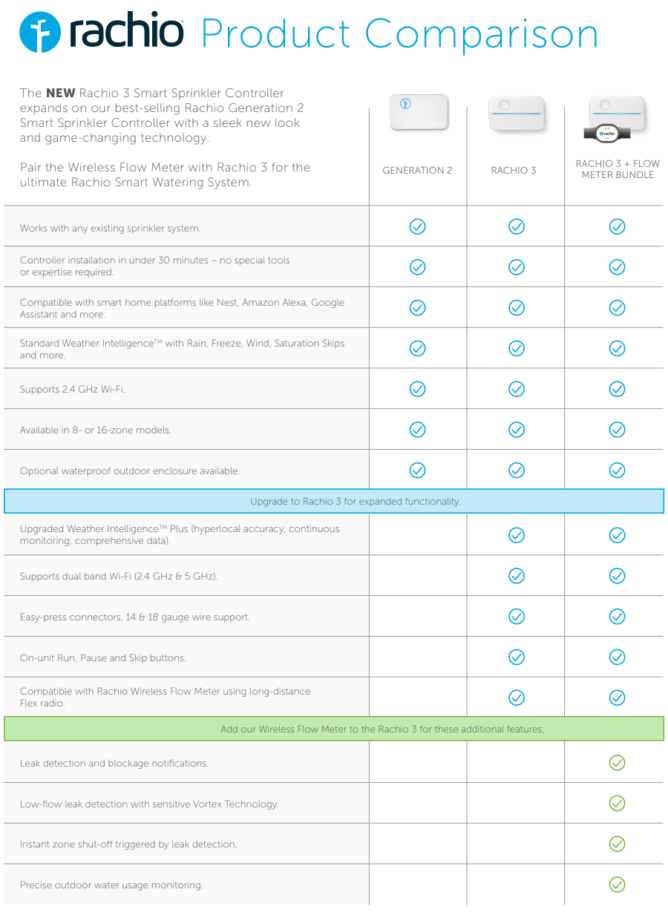 The new Wireless Flow Meter is available in a bundle with the Rachio 3, and it adds leak detection notifications with instant zone shut-off and more precise water usage monitoring. I remember as a kid, the sprinklers in our yard were prone to springtime floods after the winter had its toll. Presumably with something like this the rampant flooding we experienced would have been avoided, and we'd have known of the problem sooner.

The Rachio 3 Smart Sprinkler Controller is available today, with MSRP for the 8-zone SKU set at $229 and the bigger 16-zone version for $279. We don't know what the price for the the bundle including the flow meter might go for, but presumably, Rachio will have that information soon. In the meantime, interested parties can pre-order the 3rd gen sprinkler controller at Rachio's site.

Rachio has tweaked pricing a bit in consumers' favor. MSRP has been reduced by $30, bringing the 8-zone unit to $229 and the 16-zone model to $279. The article has been updated to reflect this change.

DENVER, COLORADO, March 20, 2018 – Rachio, the smart sprinkler company delivering easy-to-use technology to improve residential irrigation efficiency, announced the release of the Rachio 3 Smart Sprinkler Controller and Rachio 3 Wireless Flow Meter to its water management product lineup. As the leading developer of smart home irrigation controllers and creator of the nation’s first and best-selling smart sprinkler controller in the United States, Rachio designed these new products to help homeowners take complete control of outdoor water use from their smartphone for as little as $249.99.

The Rachio 3 Smart Watering Controller, unveiled today, raises the bar on smart watering with even easier installation, 2.4 and 5 GHz wireless compatibility, enhanced weather data with Weather Intelligence™ Plus, and a new long-range radio to connect with the first-ever residential wireless flow meter. The Rachio Wireless Flow Meter uses patented Vortex technology to get highly accurate readings of water flow. The Rachio app alerts homeowners when leaks are detected, and the Flow Meter automatically shuts down water supply, protecting against landscape damage and flooding.

“Rachio is not only saving homeowners frustration, water, and money, we are helping communities conserve water on a much larger scale,” says Chris Klein, CEO and Co-Founder of Rachio. “With more than sixty percent of residential water waste in the United States occurring outdoors, our new products empower consumers to be smarter with water, so they don’t have to choose between conservation and easily maintaining a beautiful landscape.”

The Rachio 3 Smart Sprinkler Controller harnesses cloud-connected software that empowers consumers to run their sprinkler system anywhere, anytime, right from their smartphone. The Rachio app takes the guesswork out of watering by recommending days and times for watering based on location, vegetation and soil type. Rachio 3-exclusive Weather Intelligence™ Plus references comprehensive satellite, radar and weather station data to provide schedule adjustments accurate to within a 36 foot radius of the controller.

After raising the recent $10M Series B round with Eastside Partners and Bonaventure Capital, in which the Amazon Alexa Fund also participated, Rachio continues to lead innovation in the smart irrigation category and beyond. Benjamin Cobb, Partner at Eastside Partners notes, “Rachio is so much more than a smart sprinkler company. While they clearly lead this exciting segment of the smart home market, they are also rewriting the book on water conservation. Their innovation mentality extends to all aspects of their business.”

Rachio is the most connected smart sprinkler controller on the market, working with everyone’s favorite smart home systems and voice services including Amazon Alexa. “We’re excited to make a follow-on investment in Rachio as they continue their growth and innovation in sustainable solutions for the smart home,” said Paul Bernard, Director of the Alexa Fund at Amazon. “Hands-free voice control is making the smart home simple and convenient for customers. Rachio’s Alexa skill makes it easy for customers to control their intelligent sprinklers simply using their voice, helping to improve water efficiency in the home.”

Rachio has saved homeowners and their communities more than 22.7 billion gallons of water since it released its first smart sprinkler controller in 2014. The new Rachio 3 Smart Sprinkler Controller and the leak detection abilities of the Wireless Flow Meter will continue to conserve water and help Rachio fulfill its mission to make saving water effortless and personally rewarding for the consumer.

The Rachio 3 Smart Sprinkler Controller and Wireless Flow Meter will be available for pre-order with special promotional pricing starting March 20 on Rachio.com.

About Rachio
Rachio, the maker of the leading smart sprinkler controller, is changing the way people think about water. The Wi‐Fi enabled controller and mobile app makes using at‐home sprinklers easy and convenient while saving users water and money. With Rachio’s technology, the term ‘smart home’ expands beyond the house and into the yard, allowing users to set it and forget it while helping conserve one of the planet’s greatest resources. To date, Rachio has helped users save more than 22 billion gallons of water. For more information, visit www.rachio.com.