It's coming up on two years now since Google first introduced the idea of Android Instant Apps. Instead of users having to download and install a full app prior to using it, Instant Apps allowed developers to give users a way to jump right into app screens and start interacting with them, as easily as if they'd clicked a link to a webpage. Not only did that let you get things done faster, but also served as some smart advertising for devs; if a user liked what they saw with Instant Apps, they might consider downloading and installing the full thing. Now it's time for the next evolution of this feature, with the debut of Google Play Instant for games.

The news comes to us as part of the announcements from Google Developer Day at this year's Game Developers Conference. While Instant Apps functionality is nothing new by now, its focus has been on productivity titles and services. Google Play Instant brings that same kind of immediate software gratification to Android gamers. Specifically, it allows for larger APK downloads and progressive delivery of files. Considering how big game assets can be, it's easy to appreciate why Google thought an upgrade to Instant Apps was in order. 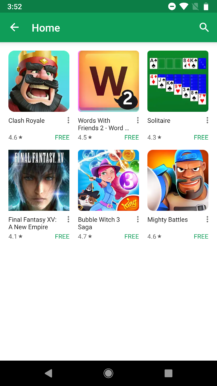 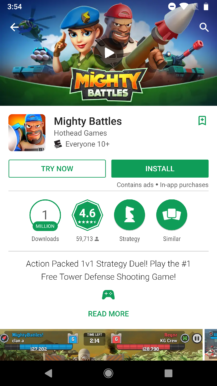 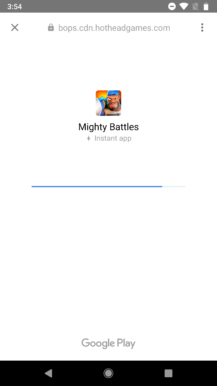 You can check out Google Play Instant games in the Play Store, where you'll spot a “Try Now” button to the side of the usual “Install,” same as things are for Instant Apps. Tapping that button brings up an oh-so-brief loading screen (so quick that we had to try several times just to grab a screenshot of it in progress) before taking you right into the gaming action.

In addition to finding these titles in the Play Store, you can also check them out under the “Instant Gameplay” banner of the new Arcade tab in Google Play Games. While the interface here is slightly different, you're once again just one tap away from launching the game of your choice—no install needed. 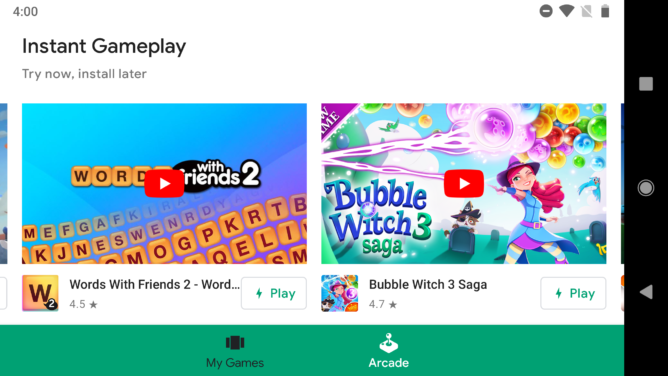 Previewing Google Play Instant titles isn't a once-and-done experience, either, and you can still see titles you recently played hanging out at the top of the Google Now launcher.

Right now there's only a handful of titles supporting Google Play Instant, and that sounds like the way things are going to be for a while; Google describes the current state of dev access to the feature as a closed beta, but invites interested parties to register for updates on the tool as it approaches broader availability.