In 2016, Jeff Bezos said of Amazon’s streaming video offerings, “When we win a Golden Globe, it helps us sell more shoes.” This was his way of explaining how the enormous amount of money and resources Amazon was pouring into its original prestige programming could lure customers into the warm embrace of its retail business. But until now, we had to take Bezos’s assertion on faith. I mean, he is the richest man in the world, after all. He must know something. Well, thanks to a scoop by Reuters, we now have a more concrete idea of what Prime Video really means for Amazon’s bottom line: 5 million new customers.

Reuters got ahold of some internal Amazon documents from early last year that offer a fairly straightforward cost-benefit analysis of each Prime Original program. Surprisingly (to me, anyway), a big moneymaker was The Man in the High Castle, which cost $72 million to produce and market, and drew in 1.15 million new Prime subscribers. This means that The Man in the High Castle cost Amazon $63 for each new Prime subscriber, and subscriptions usually cost consumers $99 per year. There’s no need for underpants gnomes memes here, because this is clearly profitable. And that doesn’t even take into account all the stuff, including shoes, that all those new Prime members are going to buy...from Amazon. And Prime members buy more stuff from Amazon than non-members.

How do they know which shows are responsible for hooking new members? While that part is not explained in detail, one simple metric is to look at which Prime Original is the first to be watched by a new Prime member, the “first stream.” If the first thing they sit down to watch is, say, Mozart in the Jungle, it’s a good bet that the program had a big influence on the decision to sign up. 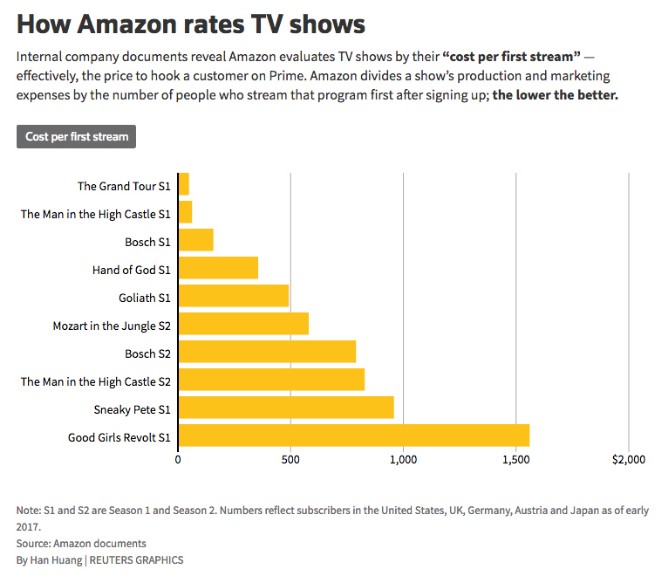 Reuters determined on its own that about 26 million people watched Prime Video in 2017, about half of the number of subscribers Netflix is estimated to have. But of course Netflix’s end goal is to get you to watch more Netflix, so much so that you can’t imagine life without Netflix, and so you just keep subscribing to Netflix forever. Amazon uses its shows as a carrot to draw you into its store so that you’re not just spending money for its video content, but for almost literally everything else in your life. Sounds like a pretty good plan when you think of it that way.

What remains a mystery, however, is the precise shoe-to-Golden Globe ratio.