At the end of January, Essential announced that it would be skipping a full release of Android 8.0 Oreo, instead going straight to 8.1. About a month after the first beta build of 8.1 came out for the Essential Phone, the official Android 8.1 Oreo update has been released from the floodgates.

We're excited to announce the full release of Android Oreo 8.1 on Essential Phone! Check your phone now for the update. pic.twitter.com/0PwPBMj6h1

The full 8.1 update was indeed waiting there for our own Ryne, who has an Essential Phone on the 8.1 beta. For him, the update comes in at around 276MB, though that'll vary depending on whether you're on the beta track or not. It's around 1,015MB if you're coming from 7.1 Nougat.

Yes! The 8.1 @essential OTA finally resolved the hang on attempting to restore from another device's backup. https://t.co/Q9uivUDwQq

Artem has updated his Essential Phone, which formerly wouldn't even work if he opted to restore apps and settings, and he's overjoyed that he finally has a functioning phone. 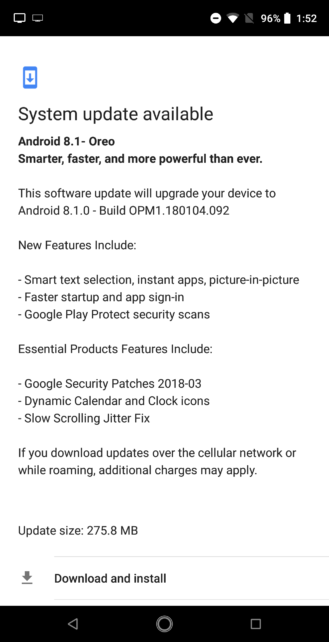 The changelog mentions standard Oreo features such as Instant Apps, picture-in-picture, smart text selection, and more. Essential is adding the March security update, dynamic calendar and clock icons, and an apparent fix for the slow scrolling jitter. We'll update this post with more screenshots when Ryne's phone finishes the update.

Zoolz Cloud Storage nets you 2TB of cloud backup for life—and it's on sale for less than $50 ...