Just last month, Google Photos dropped support for the three Android versions that fell under the Jelly Bean name, and now it looks like Android Messages is making a similar play for modernization. One difference in this situation is that Messages is dropping Android 4.4 KitKat (API 19). As of last month, KitKat still holds a fairly sizeable 12% of the Android population. As of the latest release, the requirement has been incremented to the next major version: Android 5.0 Lollipop (API21).

As it was pointed out with Photos, this only means that users with a phone running KitKat will simply stop receiving updates to the Android Messages app. However, the previous version will continue to operate normally.

Notifications with picture and video counts

Google has been experimenting with different notifications styles for a long time, and as we've seen with Android P, those efforts aren't over. While Android messages is good about using rich notification styles to show thumbnails of the pictures people have sent to us, it never actually communicates how many pictures were sent to us. For example, the two screenshots below show a notification for a message that happens to contain three images, not just the one that's shown. 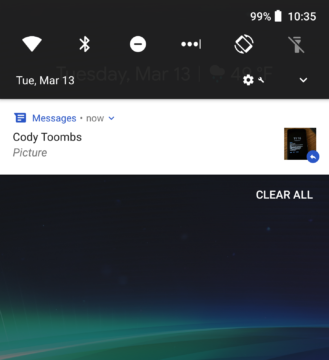 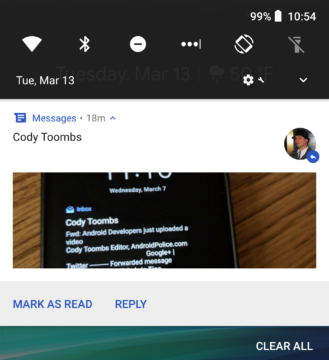 As of the latest version, there are now strings that can be used to show the number of pictures or videos that were sent in a message. This will just change the notification text from the current "Picture" message to something like "3 pictures."

This is certainly a subtle change compared to most of the things we look for, and it seems like it should be pretty simple to implement, but it's the type of polish that makes an app much nicer to use. It's worth noting that I've tested on a couple phones and so far none of them show the counter, so this probably isn't live yet unless Google is going to activate it remotely.

Last month's teardown of Android Messages turned up signs that users may begin being able to make purchases. To be clear, this differs from the existing ability to send or request money from other individuals, a feature that was added back in November. Instead, this appears to fall more in line with payments for retail or service industry situations.

Quite a bit of new text for the payments feature was added in this update, though most of it is for standard error messages, building out the UI for itemized receipts, or generally filling in some of the other little gaps.

However, there is one addition that does stand out as distinct. There is a line with the text, "SWIPE TO PAY" and a new layout named payments_swipe_to_pay_view. This obviously means there will be a swipe gesture required to either begin setting up a payment or used as a final confirmation before money changes hands.

Oh, and there's also an image for completed payments. 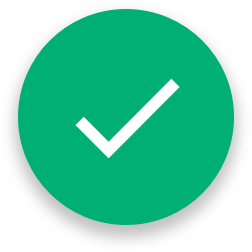 Another topic previously discussed in a teardown was Google's "Enhanced Chat" and the ability to send messages over Wi-Fi or cellular data (as opposed to the old messaging protocols). There was some discussion that these features may be exclusives for Project Fi subscribers, especially since some support pages included some instructions that overlapped closely with text from the teardown, but a live support page included fine print indicating that the same functions would work with "some phones and service providers, including carriers or Jibe Mobile from Google."

In the latest update, new text removes any doubt that texting over Wi-Fi and other features would work with multiple carriers. In the lines below, it's made clear that users will have to verify their device info with their carrier to enable enhanced chat features. Not that it adds much to the conversation, but one line also includes a placeholder where a specific installed SIM will be referenced for multi-SIM phones.