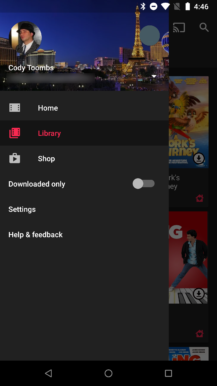 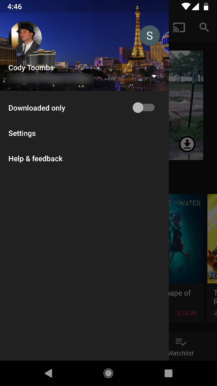 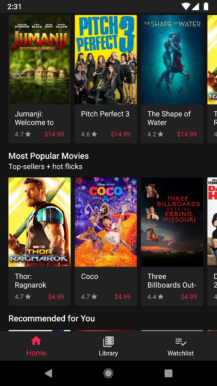 There's no denying that the bottom navigation bar is taking over among Google's app lineup. Play Movies & TV joins the list as it cuts two destinations from the navigation drawer (and removes another entirely) to place them into a new nav bar at the bottom of the screen. – Thanks, Jens Knutson.

The three destinations now include: Home, Library, and Watchlist. Those first two come from the navigation drawer, which also lost the Shop destination (for now), but the Watchlist is now jumping into the spotlight. It used to exist as a tab in the Library screen, but as of v4.2, it has graduated to a screen of its own. We'll come back to this for a little bit more in the teardown. 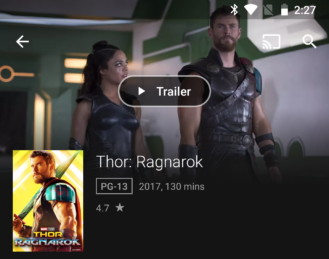 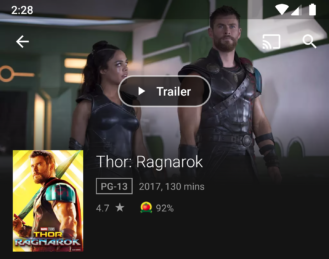 Rotten Tomatoes has become one of the top sources for opinions about movies, as anybody reading this surely knows. Google Play Movies has been showing scores from Rotten Tomatoes for quite some time, but it only featured the standard Fresh and Rotten emblems. With the latest update, you can now also find movies carrying the honor of Certified Fresh, meaning that they've scored a stable 75% or higher positive rating with a sufficient number of reviews, and at least five reviews from top critics.

The new bottom nav bar only appears to be a change in navigation for now, but buried in the XML that defines it is a clue about yet another page that will be coming. In fact, there are five buttons defined in the bottom nav bar, but only three are currently showing. In addition to the Home, Library, and Watchlist buttons, there are also lines for the seemingly removed Shop link, plus one more for a brand new 'Guide' page.

At this point, not much else can specifically be linked to this new page, but it's pretty likely that it can be described with the contents of the next section.

The new Guide page, as you could easily guess from the name, will likely contain recommendations for TV shows and movies. What makes it unique is that it will also contain content that you might watch somewhere else. A host of new strings point to a page with content that may require subscriptions to cable or satellite services. Some lines also reference installing another app, likely the custom apps for those particular services, but possibly also for streaming services like Netflix and Hulu (–and possibly not Amazon).

Along with the references to cable and satellite services, there are also pricing labels for monthly subscriptions. It actually looks like Google might be jumping into advertising other services, not unlike what Amazon does with the Prime Video service. In all likelihood, Google is setting up an affiliate partnership with several of these services.

If this is part of the Guide, I would expect it will contain mostly recommendations for movies and television shows that match your viewing history. It may also be localized for cable networks in your area. We'll probably see more details down the road, but this already looks like a potentially big addition to the app.

Leave a rating, thumbs up or down

The final topic of this teardown leaves some room for speculation. Text has been added instructing users to press and hold an item to rate it. That by itself is somewhat interesting because the Play Movies app doesn't currently allow users to leave ratings or reviews. If you want to share your thoughts, you'll have to switch to the Play Store. However, what makes this really interesting is that this appears to be a thumbs-up/down rating, as opposed to the 5-star system used throughout the Play Store.

So, there are a few possible explanations for the thumbs-up/down methodology. The first possibility is that the Play Store may actually be changing its rating system. Another possibility is that this is the second tier of reviewing–giving ratings to the reviews left by other people. That's already a part of the Play Store, though the existing system prefers to use just a thumbs-up.

The final possibility I can think of is that these ratings don't actually go back out into the general public, but rather serve just to communicate your personal preferences to Google's recommendation engine. Effectively, it will be a way for you to tune the Guide so Google can give better suggestions. I tend to think this is the most likely, but as more clues come in, we may have more to consider.