Phantom Secure takes what appear to be BlackBerry 9720s and removes the microphones, camera, GPS, Internet capabilities, and normal messenger services. It then adds PGP and routes messages through overseas servers. The company also has remote wiping capabilities in the case that a phone is seized by authorities. It looks like the company also offers Samsung Galaxy phones, though BlackBerry phones are likely more popular and they're the only ones mentioned in this report. 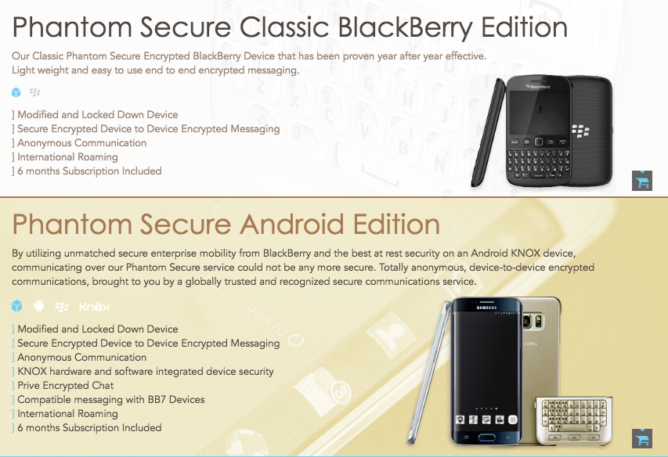 A heavily-redacted complaint by FBI Special Agent Nicholas Cheviron filed in the Southern District of California last Thursday charges Ramos of racketeering conspiracy to conduct enterprise affairs, conspiracy to distribute narcotics, and aiding and abetting. Ramos is on record as saying, "We made it---we made it specifically for this [drug trafficking] too," to undercover agents. The FBI has at least one cooperating witness, a convicted transnational drug trafficker from the Sinaloa cartel, who was a Phantom Secure customer and used the company's phones to do their business. The aiding and abetting charge comes from said witness, who allegedly used a Phantom phone when organizing the transport of five kilograms of cocaine.

Motherboard's anonymous sources say that the operation was carried out in partnership with Canadian and Australian authorities, and that Phantom Secure phones have been sold in Mexico, Cuba, and Venezuela, as well as to the Hells Angels. Canada's Royal Canadian Mounted Police (RCMP) assisted by posing as drug traffickers while purchasing Phantom phones, asking if sending messages like "sending MDMA to Montreal" would be safe (Phantom said it was "totally fine"), and pretending that an associate with incriminating evidence had been arrested and required a remote wipe. Multiple undercover agents, posing as drug traffickers aiming to expand their operations, met Ramos in Las Vegas in February 2017.

An estimated 20,000 Phantom phones are being used around the world, about half of which are in Australia, giving Phantom tens of millions of dollars in revenue. That might change with this report, though.

The Justice Department has formally indicted Ramos and his associates, seizing Phantom Secure's assets in the process. As a result of these actions, those 20,000 or so Phantom phones that had still been in use are now disabled—so much for that revenue stream.

New OxygenOS Open Betas rolling out to OnePlus 3 and 3T