Motorola may be in the middle of a big staffing shake-up, but that's not stopping the company from keeping up with the flow of software updates for its existing hardware. Last year we saw Moto's flagship Z series, with its support for modular hardware add-ons, evolve with its second generation of handsets, including the high-end Moto Z2 Force. For the past couple months now, we've been watching Motorola's Oreo update for the Z2 Force spread to devices on more and more carriers, and now it looks like we're adding Sprint to that list.

If you've got a Moto Z2 Force on Sprint, there's a good chance that system software OCX27.109.48 has already trickled down to your phone, since distribution first got underway late last month. That's right around the same time we got wind of Oreo updates landing for the Z2 Force on AT&T.

Motorola first confirmed its intention to bring Oreo to the Z2 Force back in September, and updates initially started going out in December. Verizon users were among the first to see their phones receive the Android 8.0 update, and T-Mobile subscribers weren't far behind. 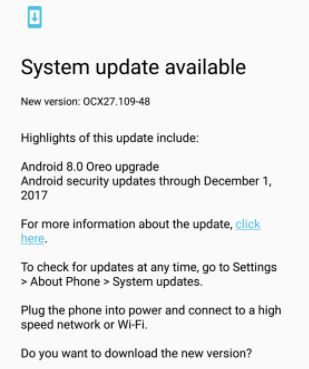 But following that initial volley, we ended up having to wait for two months before we saw AT&T get in on the action, as well. With this confirmation that the Sprint Z2 Force Oreo update has similarly begun, we've got all four major US carriers covered.

The release notes we've seen don't suggest there's anything extra tacked on to this update, and just like the others that have already come down the pike, OCX27.109.48 for Sprint includes the Z2 Force's main Oreo update, as well as security updates through the beginning of December.

Motorola lays off up to half of Chicago engineering team, says Moto Z line will 'continue'