Speedtest is the app we turn to when we either want to brag about our awesome new fiber super-mega-ultra fast connection or we want to make sure our connection is being really crappy and not our devices behaving badly. The app has looked pretty much the same for as long as I've known it, but it is getting a much needed revamp now in version 4.

Gone are the blue waves of yore, the big yellow Begin test button, and the neon glowing gauge. Instead, the app is much more flat now and reminiscent of something between iOS and Android. There's a dark navy-indigo background, simpler icons, and thinner fonts. I'm not a fan of the latter. A bit of bold on the speed results would have made them stand out more. As it is now, I had to squint to see the difference between the first and third screenshots below provided by Artem on his LTE (the WiFi icon shows because he's using demo mode) then realized that the first one is before the test is started and the third has the result on top. For comparison's sake, here are a few screenshots of v3.2.44 of Speedtest. It was more lively, but also felt a little dated. 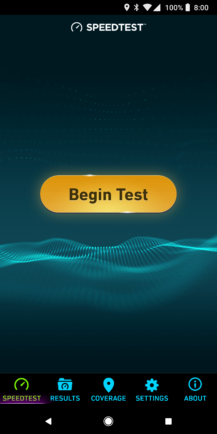 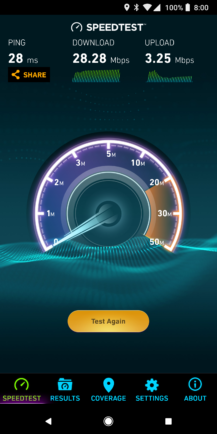 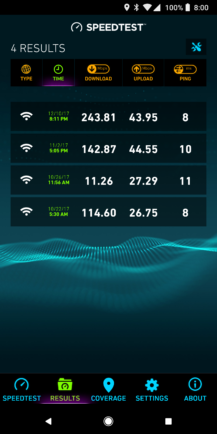 Speedtest v4.0 is rolling out on the Play Store, but if you don't have the updated version yet, you can grab it from APK Mirror.

The official changelog for v 4.0 has been published on the Play Store and it turns out there are more functional changes below the surface like easier server selection and Mbps or MB/s unit support:

WHAT'S NEW
Introducing the new Speedtest!
- All-new design and improved user experience
- Speedtest now measures packet loss & jitter
- Easier server selection with built-in search
- Adjust your Speedtest gauge to use Mbps or MB/s, or increase the scale for higher speed connections
We hope you enjoy the new Speedtest and welcome your feedback in the settings screen of the app, or in a review on Google Play. Thanks and happy testing!

Android P feature spotlight: Battery saver gets renamed several times, and it can be scheduled ...