Mario Day is right around the corner (March 10—get it? MAR10?), and it looks like Google is putting on a little celebration. Nintendo's beloved red-capped plumber has started cropping up in Google Maps.

We learned about this from tipster Uren Patel. (Update: The event was also teased earlier today on the Google Maps Twitter account.) Uren says Mario's trademark "? Block" appeared today in the Maps UI; tapping the block offers the option to show Mario as your position marker. The Easter egg could have something to do with Nintendo's upcoming mobile kart racer, Mario Kart Tour, which is set to release sometime before the end of March next year. 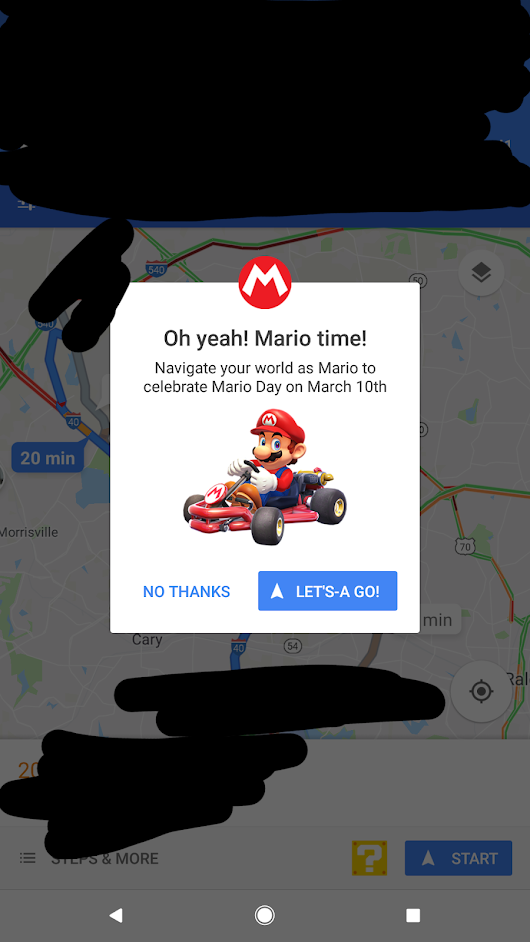 This isn't the first time Google Maps has provided some geeky fanservice. A 2015 promotion for "Star Wars: The Force Awakens" gave users the option to show their position as either an X-wing or a TIE fighter; the year before, Nintendo's own Pokémon populated Maps for an April Fools' Day event.

Be safe out there on the road, and keep an eye out for banana peels and turtle shells on your weekend drive.

In order to check out this Mario-led navigation action for yourself, Google advises users to update to the latest version of Maps, then tap that "?" brick to get started.

While users around the globe will be able to interact with the feature starting today, keep in mind that Mario won't be sticking around forever, and if you want to him to join you for a ride you shouldn't dally; he'll be gone again in just one week.

Wahoo! Now you can navigate the world as Mario in @GoogleMaps to celebrate #MAR10Day! Check out #MarioMaps on Google Maps now for a week. pic.twitter.com/iX3uZMfLrc