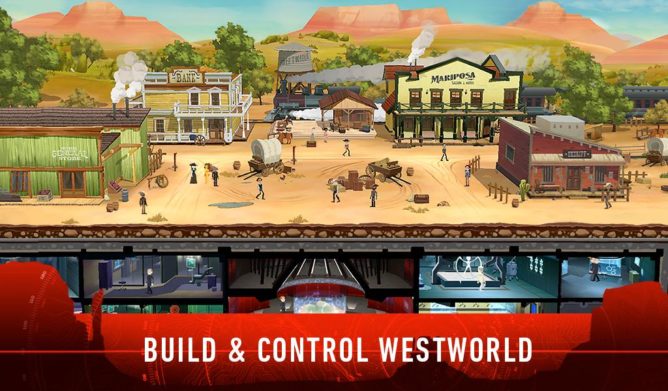 I haven't had much time to dive into the gameplay, but from what I have seen so far it is safe to assume how it works. Basically, as a new employee for Delos, you are tasked with creating hosts that best suit the park's guests. As you match up guests to their hosts, you will unlock the in-game currencies necessary to build even more hosts. And what is really interesting about this is that each guest has different tastes, so there will be plenty of hosts that won't give the guest the optimal pleasure required. This means you will have to mix and match by creating the best hosts with your limited resources.

The thing is, matching hosts with guests results in a wait timer. So far these only last a few minutes at a time, though it may get worse the further you progress.

As you earn in-game currency, you can also use it to build out the park and the headquarters underneath. The more you expand, the more resources you will have at your disposal to keep the park running smoothly and your guests happy, which is your ultimate goal.

So more or less this is going to be a casual game designed to be played passively in your spare time throughout the day, much like Fallout Shelter. This is even more clear once you take a look at all of the available in-game currencies, wait timers, and in-app purchases that just so happen to run as high as $99.99 per item. Of course, this is nothing new for a free-to-play mobile game from the likes of Warner Bros, but it is something to keep in mind before you dive in head first.

Now, when I first saw that there was an official Westworld game coming to Android I have to admit that I was pretty excited. After playing the game for a bit, my excitement has diminished, though I have to give Warner Bros. props for even bringing such an odd game to mobile. I mean sure, the gameplay doesn't stray too far from the FTP norm, but you have to admit that creating semi-cognizant androids for the purpose of in-game character pleasure is a pretty strange setup for a mobile release. Building new hosts just so you can watch them get gunned down feels odd and a little more personal than your average game, though I suppose there is a perverse pleasure to it that assuredly lines up with the craziness found in the TV show. So for staying true to the original content, I am going to say that you should at least give this a quick look if you are a fan of the series.