We already posted about battery saving mode no longer using flashy orange bars in Android P, but there's more to it than that. It also seems to be having an identity crisis with a total of three different names being used for it, and it's now adjustable to activate from anywhere between 5% and 70%. 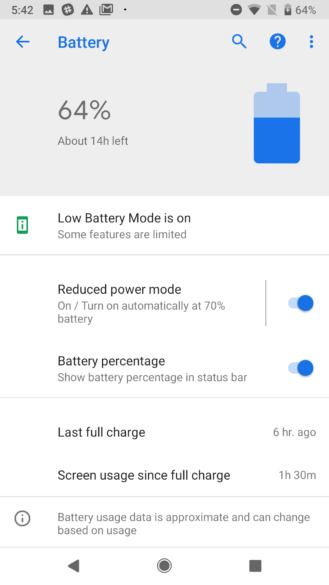 In Android 8.1 Oreo, the simply-named 'Battery saver' has three toggles for when it can automatically kick in: Never, at 5% battery, and at 15% battery. Things get a lot more complicated in P, though. First of all, there seem to be three names that are all used in different places for one feature: 'Low Battery Mode,' 'Reduced power mode,' and 'Battery Saver.' Chances are that Google will fix this by official release time. 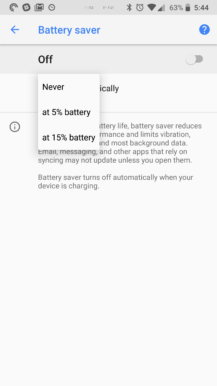 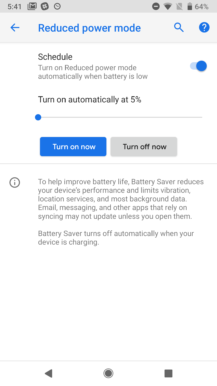 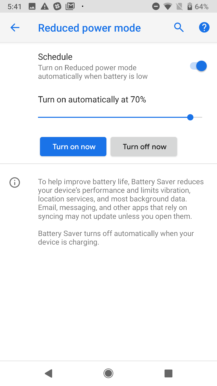 More interestingly, the battery-saving mode can now be scheduled to turn on from anywhere between 5% and 70% battery. That's a big departure from the 5% and 15% options in Oreo, though I'm not entirely sure who'd want their phone to be running with reduced performance starting at 70% battery. At least the option's there if you want it, though. And it's nice to see the use of Product Sans in the 'Turn on now' and 'Turn off now' buttons, even though they don't currently work.

Android P feature spotlight: Up to 5 Bluetooth audio devices can be connected simultaneously ...