This year's MWC just wrapped up a few days ago, but for almost a week, news from the event dominated our feed. Numerous individual product announcements occurred in Barcelona this year, and now that it's over, we've handed out seven awards to different manufacturers. Some of them are things you can buy now, some of them are things you can buy later, and some are for things you'll never be able to purchase. But Mobile World Congress (as the name suggests) is about phones, and here are our favorites from MWC 2018.

In no particular order, the winners of our Best of MWC 2018 awards are: 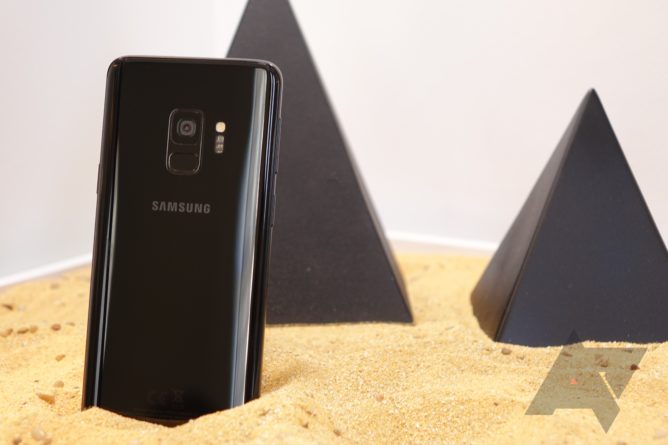 It may be more iterative than exciting, but Samsung's latest flagship was announced just ahead of MWC proper, and it's shaping up to be one of the better phones of the year. Based on our preliminary experience with them, we're granting the S9 and S9+ our coveted Best of MWC 2018 awards.

On paper, the most substantial changes are a dual-camera setup on the larger S9+, an impressive dual-aperture primary camera for both sizes, and an upgrade to Qualcomm's latest Snapdragon 845. The feature gap from S8 to S9 might not have been the biggest, but so far it seems to be a good phone.

Of course, for the full assessment, you'll have to wait for our coming review. In the meantime, you can read David's initial thoughts on the device.

Nokia 6 and Nokia 7 Plus 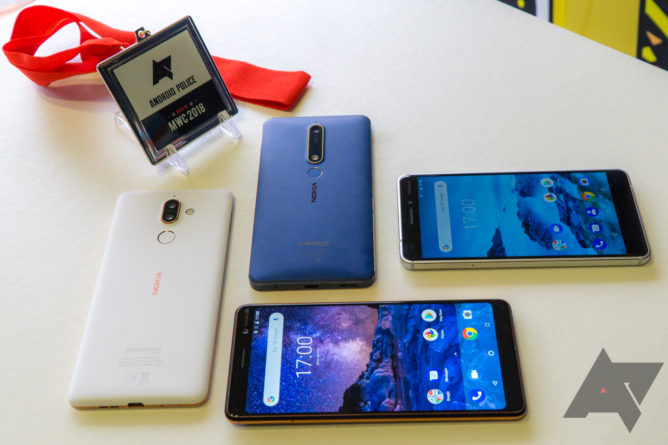 Nokia announced a veritable pile of phones at MWC this year, including a pretty nifty Android Go device, but it's the Nokia 6 and Nokia 7 Plus and that have won our awards for Best of MWC 2018.

The 2018 version of the Nokia 6 looks to build on the success of last year's model, with a small but noticeable bump in specifications. But most important (to us) are the changes in software, with the Nokia 6, like all but one of the new Nokia phones, joining the Android One program. That means everyone who picks up a 2018 Nokia 6 can enjoy the glory of stock Android on Nokia's excellent hardware. Better, it'll even be available in the US.

The Nokia 7 Plus, like the 2018 version of the Nokia 6, is an improvement on last year's model. It moves to an 18:9 ratio display, Kryo core Snapdragon 660, and a big 3,800mAh battery, among other "pro" features. Unlike the new Nokia 6, there has been no announcement for US availability, though.

For more information on both the 2018 Nokia 6 and Nokia 7 Plus, you can check out our hands-on. 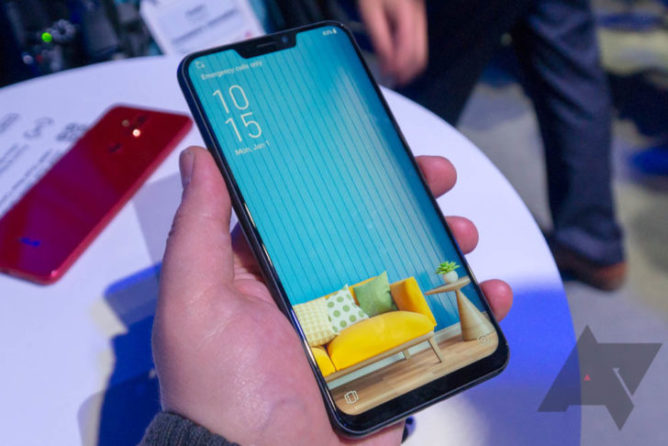 Regardless of how you feel about "the notch," many Android OEMs appear to be adopting the same strategy as Apple when it comes to maximizing screen space. ASUS was the first of the more major manufacturers to do so, announcing the ZenFone 5Z along with the rest of the phones in the ZenFone 5 series. From the time we spent with the device, we're certain it's one of the best things to come out of MWC this year.

A few unique features do live inside the rounded metal shell, though, like Sony's latest IMX363 camera sensor with 1.4µm pixels, and one of the nicest and most distinctive IPS panels of any recent Android phone. Starting at $499, it also looks to be an incredible value. You can check out some more details on the phone if you're interested. 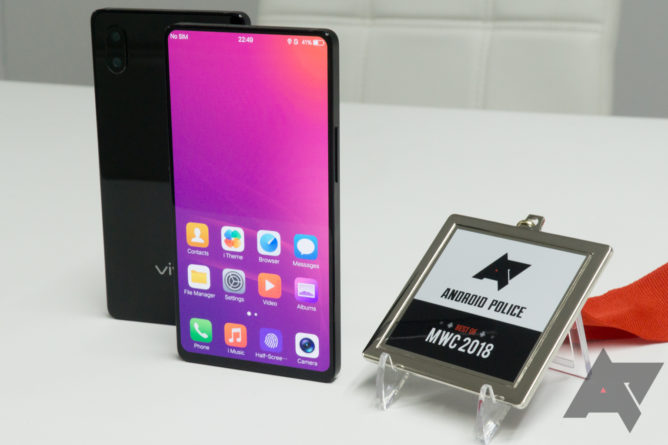 Of all the phones we saw at MWC, Vivo's Apex was probably the most stunning and unique. It was almost entirely screen, with an incredible in-display fingerprint reader and a pop-out front-facing camera. The phone's only drawback is undoubtedly its most significant: you can't actually buy one. But this concept phone impressed us so much, we absolutely had to give it one of our Best of MWC 2018 awards.

Technically Vivo's Apex wasn't the first phone to be released with an in-display fingerprint reader—that honor goes to the tediously named X20 Plus UD—but the Apex improves on it significantly with nearly non-existent bezels, a motorized selfie cam, and dual fingerprint support across the entire bottom half of the screen.

Vivo's Apex is magical and beautiful, and as a concept phone, it's also utterly unattainable. 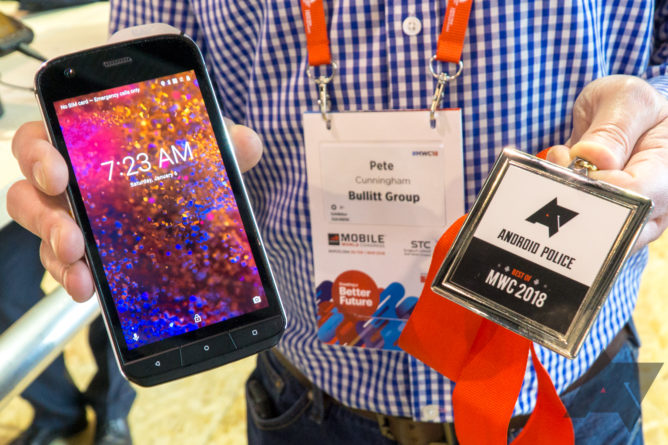 Last year's Cat S60 might have been a niche device, but it was also one of the most interesting we saw. It wasn't competing with the big flagships, but its FLIR thermal camera and hefty durability set it apart from the sea of near-identical flagships. Cat's new S61 brings a handful of improvements to the S60's formula, and in doing so, it earns one of our Best of MWC 2018 awards.

Cat's phones aren't really for the average consumer—Ryan described it once as "a tool more than a piece of consumer technology," which is apt—but the new S61 is sure to make the short list for many professionals requiring extremes of durability and technical features. It has an upgraded FLIR camera (likely based on the FLIR One Pro) as well as a die-cast MIL-spec 810G aluminum frame and IP68 resistance. Of course, it also sports an equally impressive $1,000 price tag.

For more details, you can check out our hands-on, but I expect the S61 to make more than a few construction contractors' wishlists. 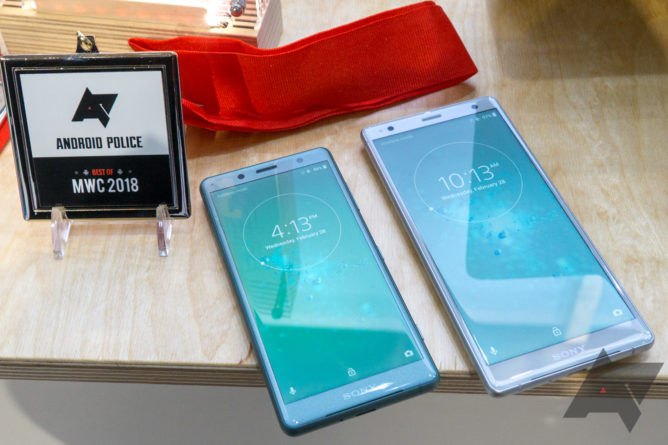 It was rumored that Sony would finally be updating its design language this year, and with the announcement of the Xperia XZ2 and XZ2 Compact it finally did, shrinking the bezels the company had so long been stereotyped for. The two new phones bring enough unique features to merit our Best of MWC 2018 superlative, like 1080p 960fps slow-motion video and the new Dynamic Vibration System for simulated bass response.

In addition to the new 18:9 1080 x 2160 displays, the phones support 4K HDR video capture. Sony also continues its habit of releasing two sizes with the smaller XZ2 Compact. Scott noted in his hands-on that I was quite smitten with the dinkier unit. And though there are some reasons for a critical viewpoint, like the lack of a headphone jack and the overall chunkiness of each, Sony fans will likely be pleased by its two latest devices.

Pricing for each is still up in the air (though Sony Germany did reveal a 799EUR/599EUR price for the two), but the Xperia XZ2 and XZ2 Compact have gained both our attention and our awards at this year's MWC. 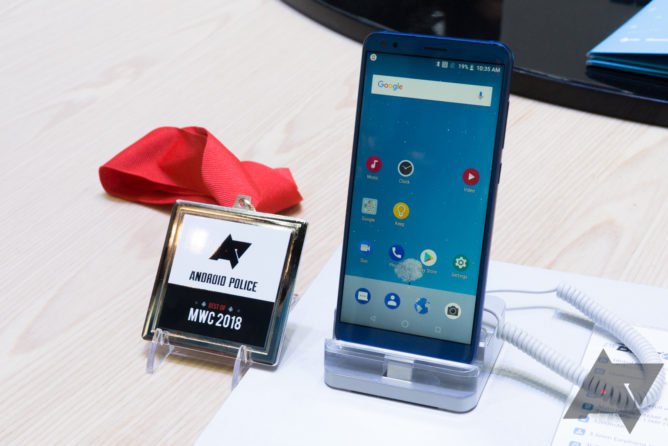 You might think that a firmly mid-range device like the ZTE Blade V9 doesn't deserve our Best of MWC 2018 award, but when you consider exactly what the company has managed to cram into it—like the glory of stock Android—you might change your mind.

The dual-camera setup, 5.7" 18:9 1080p display, aluminum frame, and glass back might all seem like pedestrian features in the contemporary landscape, but when you consider the phones the Blade V9 is up against, it's highly competitive. Laying hands on one, it certainly didn't feel like a mid-range phone, with a much more premium build quality than expected. Add in that sweet, sweet stock Android Oreo, and the Blade V9 could end up being quite a popular device.

It's too bad that no North American version has been announced, but if you're in Spain, Germany, Russia, Mexico, or China, you can check out our hands-on if the phone has your interest.

That's it when it comes to our awards for this year's Mobile World Congress. Depending on how you slice it, that's 7-10 phones, but every one of them caught our attention. Whether they made the shortlist for your upcoming purchase or not, we felt these devices deserved special recognition. After all, they're the Best of MWC 2018.

HTC U12 will allegedly feature Snapdragon 845, up to 256GB of storage, dual cameras, and more