Friday morning is starting off with a fresh update to Google Duo. The v29 release doesn't change much on the surface, but there is a new notification channel that happens to tease one feature we've been expecting. A teardown also turns up new activity for two more features many people have been anxiously awaiting: screen sharing and google sign-in. If you'd like to grab the latest update, hit the link at the bottom to get a headstart. 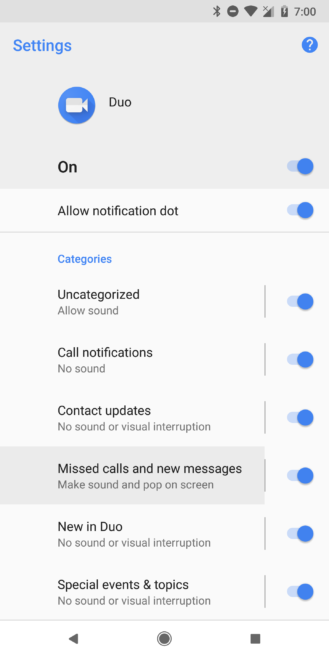 The one immediately visible change in this update is a new notification channel for missed calls and new messages. While it's no mystery that Duo is adding a video messaging feature for leaving a recording when other people are unavailable, this is the first outwardly visible sign that the feature is going to happen. Perhaps it's launching with this update?

Notification channels are only supported in Android 8.0 and above.

Another feature revealed through a teardown was screen sharing. The first sign landed back in October with the v20 release of Duo. At the time, the clues were limited, but a close examination of the code produced enough evidence to make a solid argument that the Duo team was planning to let users send their phone screens to the people they were talking to. With v29, things are shaping up very differently as a ton of new text and even a few images give further confirmation of what's to come.

The new text is mostly straightforward notification messages and UI text, including a few lines that show screen sharing can be paused, resumed, and stopped.

Also added are new images for some pill-shaped buttons used to control screen sharing. These will obviously be used to pause, resume, and stop sharing.

With Duo's generally lean interface, I'm starting to think screen sharing may be ready to launch with this version. It might just require Google to flip a switch and we'll all instantly have to give up on another excuse we used to use to get out of doing tech support for our family members.

I'm just quickly mentioning this one because there's a lot of text, but it's not really anything too new. There's a new set of notifications ordered around letting you know some of your friends have joined Duo. Unlike previous notifications, these aren't just naming one friend, but stating that there are multiple new friends available to contact on Duo. I have a feeling this promotional text may have something to do with Duo's recently added ability to call contacts that don't even have Duo installed.

Finally, yet another familiar topic: Google account linking. We've known for a few months that users would soon be able to sign into Duo with a Google account so they could be reachable by more than just a phone number. Later, we also saw confirmation that multi-device support would also come with Google account sign-in. There's nothing particularly special to learn from the new text in this update, just a line that confirms users can still use Duo with just a phone number if they want. Beyond that, I think most of us just want to know that this is still happening.