I/O news is abound these days: yesterday we saw that the registration for the ticket raffle was closed and then the preliminary schedule was published revealing focus on Assistant, Chrome and the Web, a new Android Wear session, but still no signs of TV and Auto (though they might be added later). Now we have the first sign of ticket invites being issued to those who tossed their name in the hat.

If you've been selected in this first wave, you will get an email like the one below where the I/O team tells you your credit card has already been charged and gives you the option to edit your I/O profile and see your ticket details. 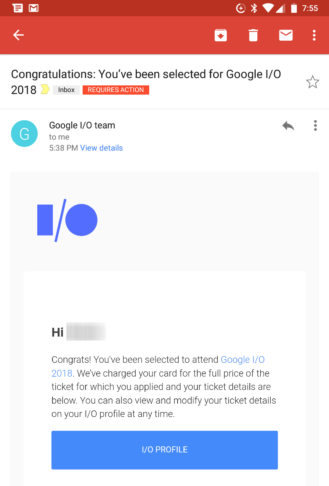 If you haven't been selected, Google has been known to release another wave of tickets later, maybe due to cancellations, so there's still hope. Cross your fingers.