In-display fingerprint scanners on phones had been prophesied for some time, but few expected relatively unknown Chinese manufacturer Vivo would be the first to release a consumer product to the market. The X20 Plus UD went on sale last month, exclusively in China, for around $565.

By all accounts, the fingerprint reader works pretty well, although the phone was mostly unremarkable otherwise. It shipped with dual rear cameras, a 1080p 6.43" OLED panel, and a Snapdragon 660. Vivo isn't resting on its laurels, and here at MWC 2018 in Barcelona, the company has been showing off an even more impressive device. 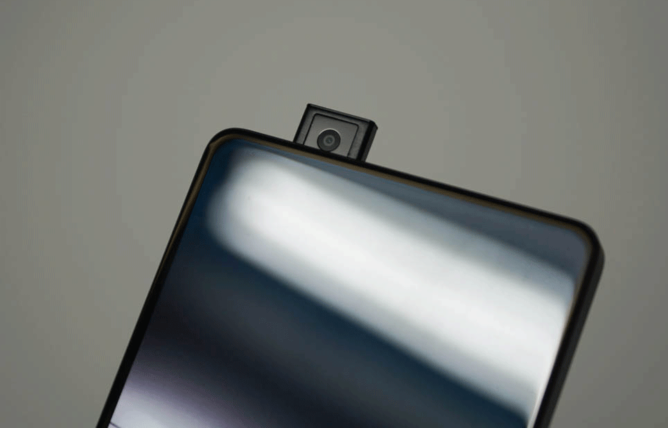 The Vivo Apex is nothing more than a concept phone right now, but it's tremendously impressive. Not only are the bezels practically non-existant — 1.8mm on the top and sides, 4.3mm on the chin — but there's also no notch in sight. Vivo achieves this with a motorized 8MP camera than rises out of the top of the phone when you switch to selfie-mode in the camera app. It's quite the feat.

You might think this would be a slow process, but it only takes 0.8 seconds. In a quick side-by-side test with a Pixel 2XL, the mechanism barely takes any longer than the camera app on both phones needs to ready itself for a selfie anyway. It is slower, but not by much. Get your hands on one and, like me, you're sure to keep switching between back and front cameras over and over to see the transformation and hear the satisfying whirring sound it makes.

Vivo tells us it wants to shave even more off the bottom bezel before it brings the phone to market. If it ends up being the same as the top and sides the phone would have a 98% screen-to-body ratio. Of course, other innovative solutions have been needed to get the bezels so slim. The proximity sensor has moved under the screen, the ambient light sensor is on the top edge of the phone, and the earpiece has been removed altogether. 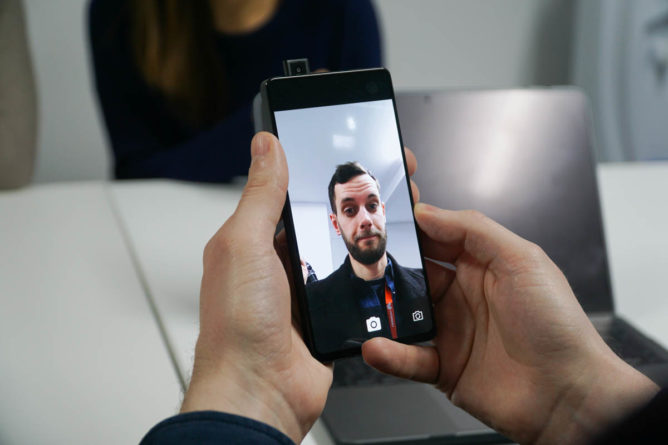 An earpiece is quite important for making calls, but Vivo didn't forget that. To produce in-call sound, the company has developed what it calls Screen SoundCasting Technology. A vibration motor under the display vibrates to produce sound through the screen. You can hold the phone either way round, the same sound will emanate from the rear of the phone. It seems implausible, but it actually works rather well as I listen to a test call. Only when calling is sound produced in this way; other audio is handled by a bottom-firing speaker. 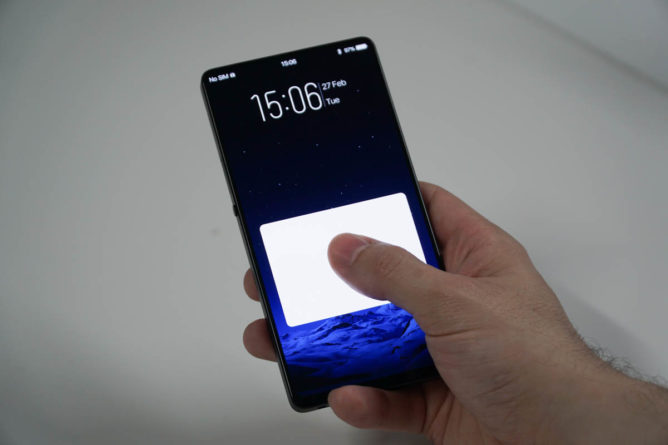 What Vivo did with the fingerprint scanner in its last phone has been extended here. You had to place your digit in a specific spot on the screen for the in-display scanner to detect it before. Now, once you've set up your print, the whole bottom half of the panel is able to process it. For extra security, you can even opt for two-finger unlock. I had mixed success demoing this feature, probably due to a combination of clammy fingers and the fact that it's an experimental concept phone. When it worked, it worked fast – so that's promising, at least. 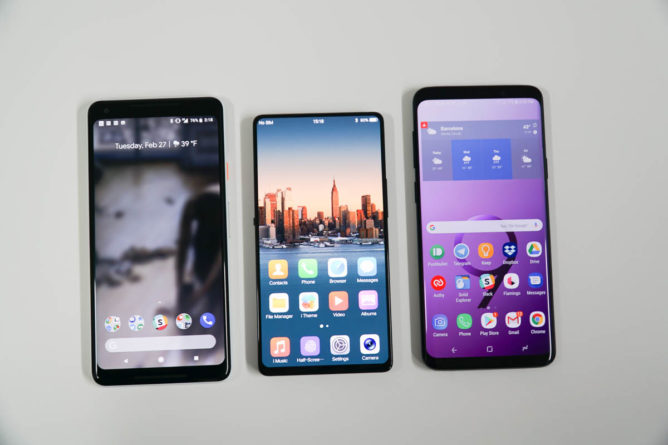 The Vivo Apex flanked by a Pixel 2 XL and a Samsung Galaxy S9+.

If you've ever seen or used a Vivo device, the rest of the phone is basically what you'd expect. A heavily skinned version of Android that steals its entire UX design language from iOS. Navigation gestures just like on the iPhone X are also present, but they did work pretty well, in fairness.

The Apex has dual rear cameras just like Vivo's last phone. It also has a 6-inch 1080p OLED display and a HiFi audio chip. There was no mention of what processor is running the show, but that would be subject to change anyway if this thing ever goes into production. 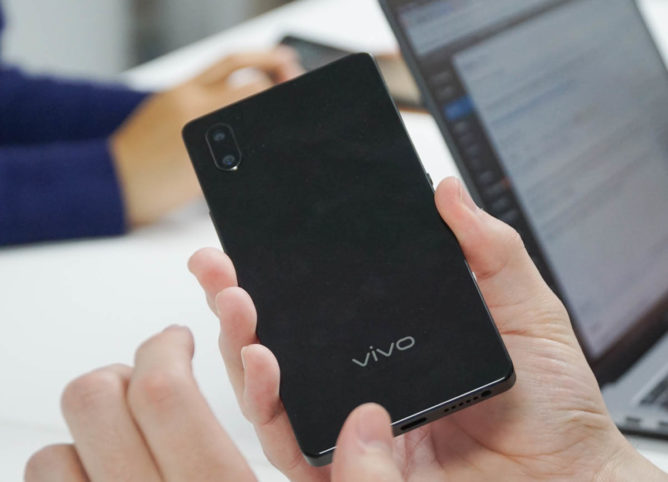 All-in-all, it's an incredibly slick phone, especially considering it's just a concept. That screen shows remarkable engineering and the pop-up camera isn't as strange as you might think. I'd be happy to spend more time with the device if Vivo ever decides it's ready for primetime. Here's hoping the Chinese manufacturer continues its good work. In pushing the boundaries of mobile experience, Vivo has taken its FullView™ technology to a whole new level by introducing new engineering breakthroughs in camera, speaker and sensor elements as well as rethinking the design structure of conventional smartphones. Vivo’s pioneering approach in fingerprint scanning technology has resulted in the world’s first Half-Screen Fingerprint Scanning Technology on APEX™, building on the success of industry’s first mass-produced In-Display Fingerprint Scanning Smartphone X20 Plus UD.

“APEX™ is an iteration of our constant pursuit of setting new industry standards and to deliver the ultimate mobile experience,” Alex Feng, Senior Vice President of Vivo said. “From breakthroughs in audio, photography to In-Display Fingerprint Scanning Technology, Vivo has remained committed to realizing our vision for future smartphones. What we showcase in this concept phone is only a fraction of our innovation pipeline. We will continue to explore all possibilities to bring the best possible experiences to our consumers.”

New Structural Design that Takes Bezels to the Limit

The APEX™ features unprecedented top and side bezels of 1.8mm--the thinnest in the industry, with a 4.3mm bottom bezel. The screen-to-body ratio will exceed 98% if the bottom bezel reaches 1.8mm, ultimately creating truly bezel-less experience. Thanks to the flexible OLED platform, microchips mounted directly to the flexible circuit board enables the APEX™’s staggering screen-to-body ratio.

Leveraging its accumulated expertise in audio technologies, Vivo introduces Screen SoundCasting Technology with APEX™, transforming the entire FullView™ Display into a speaker. The Screen SoundCasting Technology sends vibrations through the display without the need for a traditional loudspeaker. Compared to other audio solutions for bezel-less smartphones, it conserves power, reduces sound leakage, and optimizes low to high pith sound for a better and more balanced audio experience.

In keeping with the promise to continuously support user habits, APEX™ also features an 8MP Elevating Front Camera. The camera seamlessly rises in 0.8 seconds when it is required and retracts after use. Together with the hidden proximity sensor and ambient light sensor, this eliminates the space taken up by conventional front cameras, while offering the same selfie experience to users.

Following the success of In-Display Fingerprint Scanning Technology at CES 2018, Vivo has installed the world’s first Half-Screen In-Display Fingerprint Scanning Technology in the APEX™. Transforming the entire bottom half of the OLED screen, users can touch anywhere on the bottom half of the screen to perform fingerprint recognition, enabling a more flexible and intuitive experience while meeting industry standards for security.

Optimal Hi-Fi Quality, a Feast to the Ears

APEX™ deploys a new System in Package (SIP) technology to integrate the DAC and the three operational amplifiers together, reducing the need for circuit board space by nearly 60% compared to previous Xplay6. As this frees up more space in the smartphone’s interior, this technology can allow for increased battery size as well as cooling, thus opening potential for even more design improvements in future smartphones.

A global smartphone brand focused on introducing perfect sound quality and ultimate photography with cutting-edge technology, Vivo develops innovative and stylish products for young people. We now have over two hundred million users and are one of the preferred brands of young people around the world. As an Official Sponsor of the FIFA World Cup™, Vivo believes in the importance of encouraging young people to embrace self-expression and an energetic lifestyle.

More information about our innovative smartphones can be found at www.vivo.com.