The Cat S60 of 2016 was a decidedly interesting phone, and it was good in context. The Cat S60 was not intended to compete with a Samsung Galaxy or an iPhone—it was big, heavy, and had a built-in thermal camera. The new Cat S61 is much the same, but the design is more refined, and the thermal camera is more powerful. It still feels more like a tool than a traditional smartphone, but whereas the Cat S60 was a cheap Craftsman hammer from Sears, the Cat S61 is a high-end professional tool.

Picking up the Cat S61 is an entirely different experience than picking up another modern smartphone. This thing is heavy and thick. The die-cast frame gives it an incredibly solid feel. Whereas a lot of phones are glass these days, the S61 has a rubberized back cover. It's very grippy and looks nicer than the rough plasticky cover. There's also a regular SIM card slot on the side, which addresses one of my nitpicks about the S60. That phone had a weird spring-loaded door on the back cover that housed the SIM. 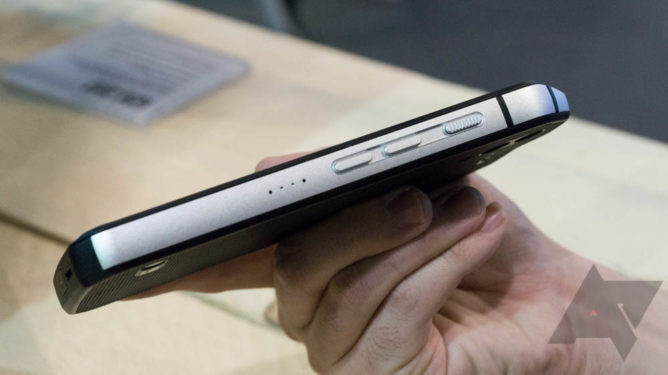 The front of the phone's design seems less haphazard than the S60's—the bezels are minimized, and the unnecessarily large speaker grilles are gone. The S60 also had odd gold switches on each speaker, which sealed them from water (and muffled the sound). That meant the S60 could dive up to 5 meters deep, but the S61 loses that feature. I think it's probably a worthwhile tradeoff as you still get standard IP68 on the S61 and it looks less "industrial."

Bullitt, which manufactures Cat-branded phones, has improved virtually all the specs of the S61 compared to the S60. There's more RAM, a higher resolution display, and a faster ARM chip (SD630). However, don't make the mistake of thinking this is meant to compete with flagship smartphones. It's going after a very specific niche. 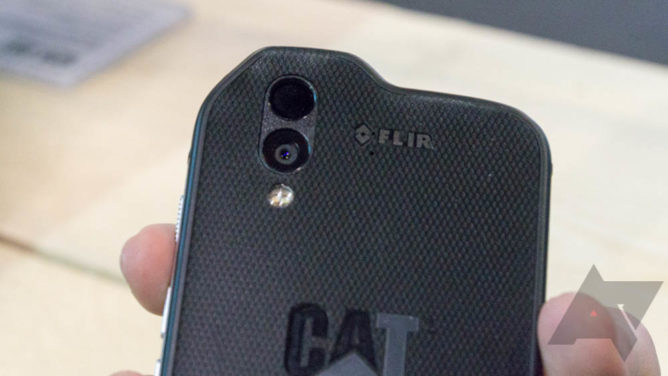 The devices I've been able to use are all pre-production, so there are some rough edges. The software tends to lag and apps crash, but this is still early. One thing I did instantly notice is that the display is much clearer and more vibrant than the S60's was. It's larger and 1080p versus just 720p on the S60. I'm also not a fan of the physical navigation buttons. They're large enough to hit with gloves on, but there's no feedback. They're mushy and uneven. Hopefully, the buttons on retail units have a bit more click.

FLIR has launched a new generation of add-on One thermal cameras since the S60 came out, and the S61 includes many of the enhancements from those devices. Specifically, it leans toward the higher end FLIR One Pro camera. Although, it doesn't have the higher resolution Lepton thermal sensor from the Pro. You do get an expanded temperature range of -20 degrees to 400 degrees C. 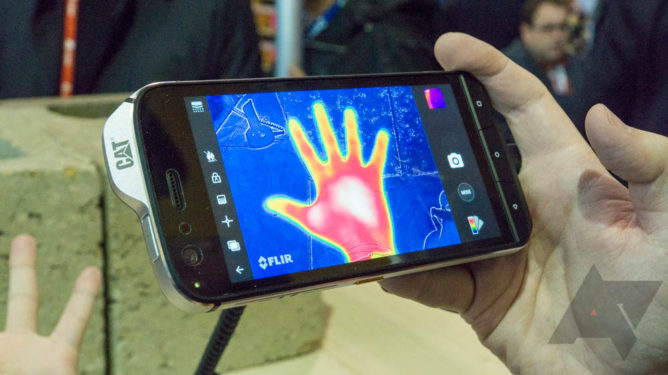 The S61 includes the upgraded FLIR app that debuted with the second gen One cameras. That's good... mostly. FLIR added some items you probably don't want like a how-to section and community forums. It supports multiple temperature probe points and live streaming for thermal images. Those live streamed videos won't look great, though. There are government regulations that limit the frame rate of thermal cameras, so videos look a bit like a Tumblr GIF.

All the buttons used to control the thermal camera are arrayed on the left side of the display, allowing you to tweak the temperature range, add measurement points, and align the MSX image. That last point is still something of a problem. FLIR's MSX technology overlays a visible light image from the main camera with the thermal image. That makes it easier to see the edges of objects instead of just the thermal blobs. However, the images might not be lined up perfectly. In fact, they almost never are. Whenever you look at something closer or farther away, you need to use the slider to line up the images. It's a bit annoying, but it's the same on every FLIR camera I've used. 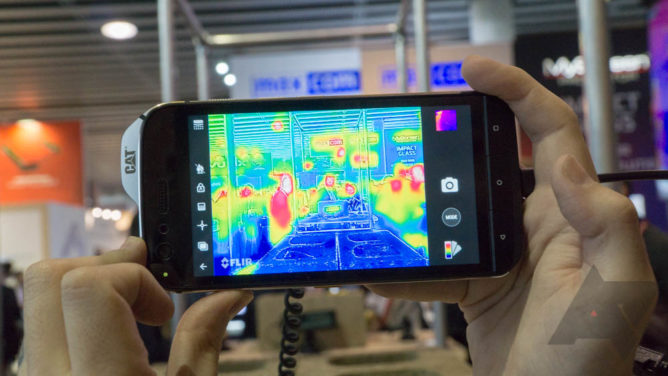 The S61 has various filters for the thermal camera, but most of them you've likely seen before. You can use some that highlight the warmest or coldest areas of a frame and others that are just using different color themes. There's also a new "night vision" filter. It's not real night vision, but it has the green-scale look you probably associate with night vision. 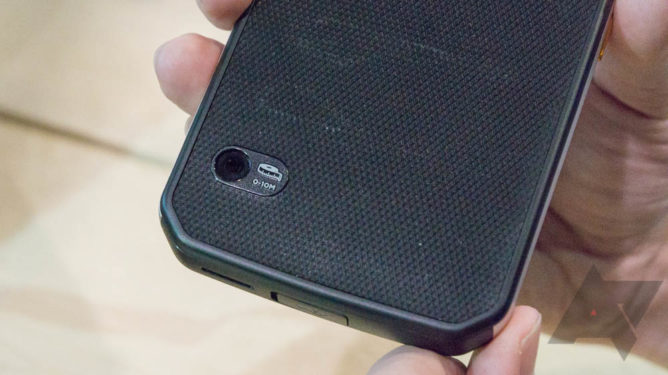 This is not directly related to the FLIR aspect, but this phone also has a new laser-assisted distance measurement sensor. It's on the bottom of the back panel. Just turn the laser on, and point it at something up to 10m away. You can take multiple measurements and use them to calculate area. This works surprisingly well.

The Cat S61 is going to cost $1,000, so odds are that you'll never buy it. There are some people for whom this is exactly the phone they need. It's durable despite being clunky and heavy. At the same time, it's a real improvement in design over the old S60 phone. The back material is nicer, and the weird SIM door is gone. 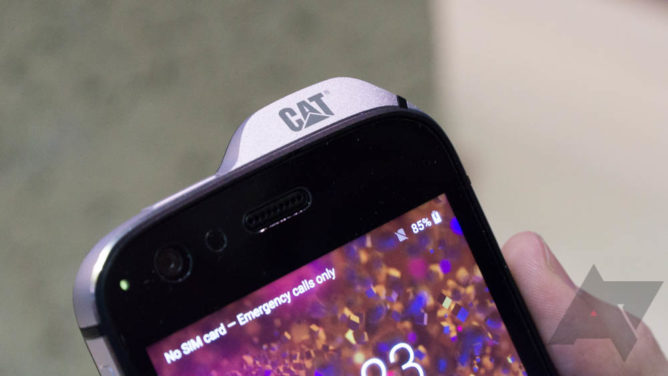 I don't think the loss of 5m water resistance is a big issue considering it's still IP68 and MIL Spec 810G. The Cat S61 will launch later this year, and we'll try to take a look at the final version when that happens.

The Twitter app has begun to indicate why it shows you the topics that it does in the ...

[Hands-on] Chromer becomes Lynket with plenty of additions for version 2.0