When Sony's Xperia Ear was first announced as a concept project in February of 2016, we were all a little wary of the utility of an assistant living inside our ears. But with Amazon's Alexa and Google's Assistant spreading their wings everywhere from our speakers to our appliances and even our headphones, the idea isn't as alien anymore. So Sony is following up now on its original Xperia Ear, which eventually launched in October of 2016, with an upgraded model dubbed the Xperia Ear Duo.

The weirdness this time around comes from the form factor: the Ear Duo loops below your year, not over it. I don't know what black magic Sony is using with its design to defy the laws of gravity, but it does seem like the little nub that goes in your ear is enough to hold the entire headset still. Sony says this won't interfere with glasses and is gearing the headset toward a regular lifestyle use, so it's not like they're saying you can run with it, but until we can get our ears on it, we can't be sure how well it handles regular motion, lengthy uses, and whether it gets uncomfortable or dislodges from your ear if you hug someone or get shoved while taking public transport. 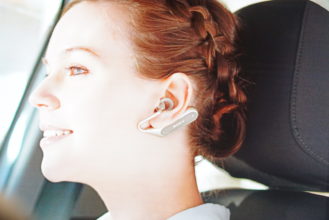 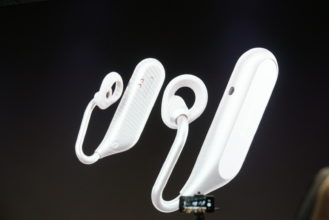 As for the features of the Ear Duo, Sony says it has an unparalleled ambient experience through Dual Listening technology that lets you hear your music, your notifications, and the surrounding sound at the same time, plus the headset can adjust the volume based on your environment. The built-in Daily Assist feature gives you relevant information depending on the time, location, planned activities, and reads your messages and news, but you can still access the Google Assistant or Siri if you prefer those. There are also sensors on board that let you shake your head to take or decline calls and skip through your music and the main area appears to be touch-sensitive for swipe and tap controls. The Xperia Ear Duo is IPX2 splash-proof and battery life is expected to be around 4hrs, but it ships with a case that provides 3 more charges on the go, including a fast-charging ability to get 1h of listening with 7mins of charging. There are also 3 different sizes of the open-ring supporter to fit different ear sizes. It will be available in Spring 2018 in black and gold.

We have a live image from MWC with a Sony rep wearing the Ear Duo with glasses. Our own Scott tried it on and said he liked and it oddly felt secure in his ear, but it was still weird. 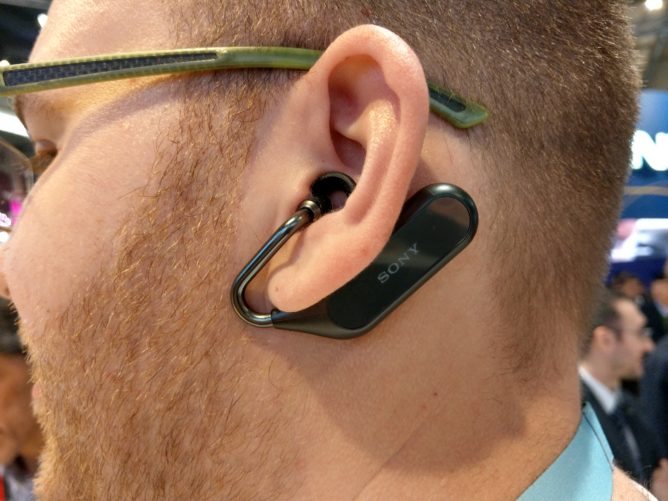