The 'Visual Core' is a custom chip in the Pixel 2 and Pixel 2 XL, designed by Google. Not only does it speed up HDR+ image processing, but it also allows third-party apps to use the technology. Instagram, WhatsApp, Snapchat, and other apps were updated earlier this month to use the Visual Core, and now the chip's service is being updated through the Play Store for the first time. 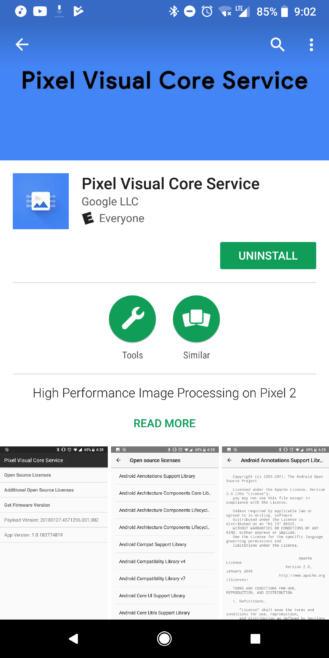 We've received multiple tips that an update for the Visual Core Service is rolling out on the Play Store. There is no changelog attached, but it carries a version number of 1.0.185741828. For reference, the previous version uploaded to APKMirror was 1.0.166778097.

More than likely, this is just a bug fix update or something else relatively minor. If you don't want to wait for the Play Store to roll it out, you can manually download the update from APKMirror.

Moto E5 Plus leaked with 18:9 screen and fingerprint sensor on the back