A report from last week by Android Authority claimed that the P20 might have a variant with a whopping three rear cameras, and a pretty telling announcement photo from Huawei substantiated that rumor. However, the phone pictured only has two. Huawei has opted to ditch the traditionally-larger top bezel for a nearly bezel-less look, save for the notch that will no doubt bother many. But hey, you've gotta follow whichever trends are hot, right? The side bezels look to be about the same size as the top one, though the bottom one is still noticeable. Within the bottom bezel is a fingerprint sensor, which looks a bit ungainly on a phone that also has software navigation keys. 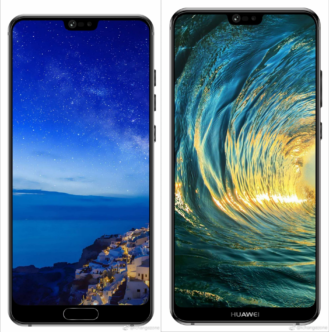 This isn't the first time we're seeing the notch.

The back looks mildly iPhone X-inspired as well, with a vertically-mounted duo of cameras and a back made entirely of what appears to be glass. The text on the bottom left says "Shirley," which is a codename that Huawei has been using for one variant of the P20. But the reasoning behind the text below the flash saying "BYOCA" instead of the traditional "LEICA" is a little less clear, especially since the "SUMMARIT" (one of Leica's ranges of lenses) text is intact with no modification. The phone also looks to be running Android Oreo based on the Easter egg prominently displayed on the screen; anything less would be embarrassing.

The P20 is slated to be launched on March 27th in Paris, so we'll be learning more about the device(s) in just over a month. But given the way that the tech world moves, we wouldn't be surprised to see more info leaked before then.

Here are all of the Galaxy S9's official wallpapers