But before we dive in to that topic, let's get back to the numbers. Each year, Samsung sells more Galaxy S phones than any other single model of Android smartphone on Earth. By a lot. During the second quarter of 2017 (the first full quarter of S8 sales), an estimated 20 million Galaxy S8 and S8+ devices shipped globally - far outpacing any other single model of Android smartphone. 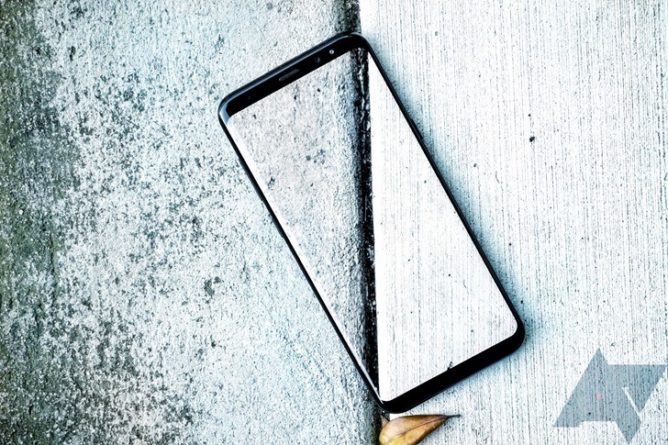 The Galaxy S8 sold extremely well, and was extremely striking.

The next closest competitor, according to Strategy Analytics at the time? A $100 Xiaomi budget phone - which still only shipped a fraction of the units the S8 and S8+ did. Shipments for every other premium Android smartphone at the time weren't significant enough to even be included in the count. Samsung's lead over its Android rivals in the premium space isn't just big, it's positively massive. In the sense of smartphones as a business, Samsung doesn't really have any legitimate Android rivals in this price bracket - it stands alone.

I say "Android" because, of course, there is an 8,000-pound gorilla I've avoided mentioning thus far: Apple. The iPhone sells far better than its Galaxy S equivalent each year, and the numbers in the report I've cited above are during a period well after the iPhones included were introduced - and they still lead the board by over 12 million units. In the quarter the iPhone 7 and 7 Plus (the iPhones in that report) were introduced, Apple shipped nearly 80 million iPhones. That's a lot.

Samsung has little hope in the near term of unseating Apple as the dominant premium smartphone vendor on the market. In the meantime, Samsung's only real rival in the premium Android space is itself - and that's why I contend that the Galaxy S9 and S9+ seem a little boring. That is: Samsung wants them to be boring.

Designed not to be different

If there's one thing that sticks out about the Galaxy S9 and S9+, it's just how much they look like the Galaxy S8 and S8+. Samsung's industrial design has long been iterative, but the S9 takes "baby step" to a whole new level (an iPhone level, if you will). While the Galaxy S7 and S7 edge looked a fair bit like the phones that preceded them, they were the beneficiaries of obvious nipping, tucking, and general smoothing over. They came in new colors and were substantially more refined than the S6 and S6 edge/edge+. 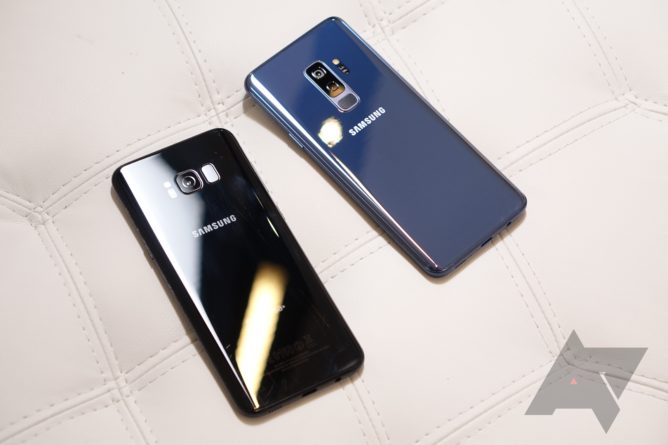 A Galaxy S8+ next to a Galaxy S9+ - from the only side you can tell them apart.

The Galaxy S9 and S9+, though, look so much like the S8 and S8+ that I think any ordinary person would find them all but impossible to tell apart. Yes, the fingerprint sensor has moved and the S9+ has a second camera, but if you think most consumers would notice any of this, you're fooling yourself. Phone geeks like us can immediately point out the differences, but... we're phone geeks. That's what we do. Anyone looking at an S8 and an S9 side by side would have a tough time noticing any real point of distinction between them, let alone be able to tell which phone is the "new" one.

Apple being the rare exception, smartphone manufacturers have historically tried rather hard to avoid any one generation of phone looking too much like another. Every iteration of LG's V and G series have been rather radically restyled. Even Google's rather visually bland Pixels really don't look terribly alike across the two generations launched so far, despite sharing some common thematic elements. The one Android manufacturer well-known for sticking to its design guns over the years has been Sony, and all that's really shown is that companies which don't change and adapt their styling quickly become the object of internet ridicule.

Software feature creep at a crawl

Based on what we've seen so far, the Galaxy S9 has very few new software features to boast of. I'm not saying that's a bad thing. For years, Samsung was the poster child for cramming useless, gimmicky garbage into its phones that no ordinary person would ever use. Its edge display is still of dubious utility (anyone I've talked to about it has generally asked me how to turn it off), and while Samsung can make good software - like its browser - there are good reasons TouchWiz has been the butt of bloat jokes for years. 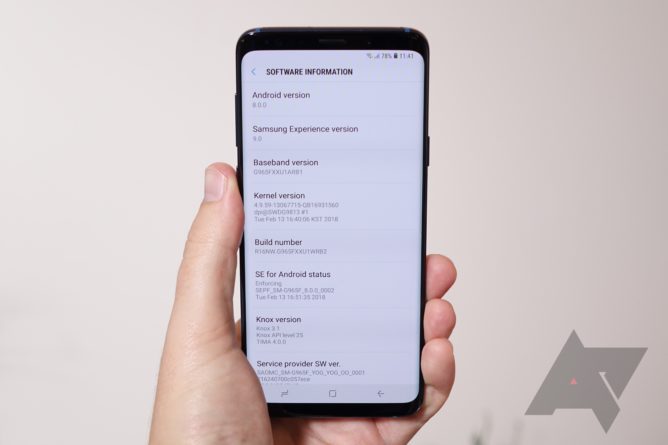 Oreo is probably the single biggest software change on the S9 - a change that will also come to the S8 soon.

TouchWiz today (or Samsung Experience, as Samsung would say) is actually quite pleasant to use, though, and Samsung has decidedly slowed its roll on gimmicks. The Galaxy S9's software looks remarkably like the Galaxy S8's, and aside from a few visual tweaks here and there along with the inherent new functionality Android Oreo brings, is basically just like what we saw on last year's phones.

The company that once was infamous for sacrificing usability and performance in the name of marketing silly features and its own visual branding has clearly matured. Sure, TouchWiz still and likely will always have its critics - me among them at times - but Samsung has changed its approach to software over the years, and the Galaxy S9 continues the trend of small but often desirable tweaks.

Setting up for a sea change

I think it's fair to say that the Galaxy S9 and S9+, particularly when placed next to the Galaxy S8 and S8+, are very boring phones. Yes, the rear camera has seen some significant changes, and I'm as eager to see what that means as anyone else. But the camera really is the one Big ThingTM Samsung is giving us this year. Essentially everything else of note that's new comes down to the innovations of partners like Qualcomm or Google far more than they do Samsung. And again, there's nothing terribly wrong with that. Samsung can build an iterative Galaxy phone - Apple does the same damn thing with the iPhone, and has now for a decade. Not every new phone has to be completely different from the last one. Forcing change where none is truly needed can be a bad thing.

But while we've seen Samsung progressively become more iterative each year in its software and hardware, I'd argue, since the Galaxy S6 launched in 2015, I think there's something different at play this year. 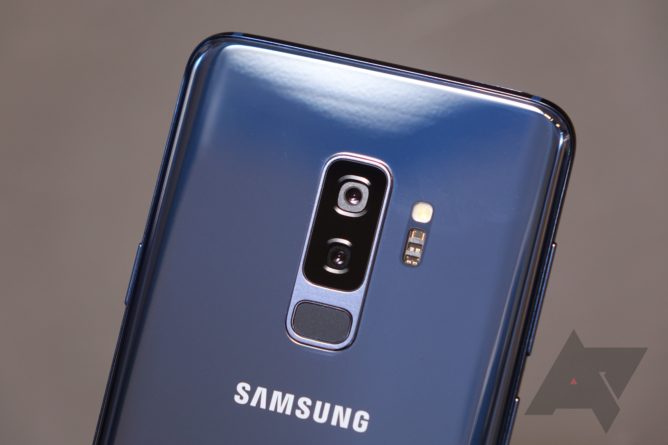 The rear camera on the S9 has been overhauled, but that's about the only part of the phone that has.

The S9 and S9+ are the most iterative phones Samsung has ever launched. I don't believe that's a result of a lack of innovation or creative will inside Samsung. Quite the opposite: I think Samsung has actively avoided making these phones stand out. Samsung needs a 2018 flagship smartphone because it has to keep up with Apple's release cycle. But I get the distinct sense Samsung is sandbagging us a little with these phones.

Think about it: Apple just launched the single biggest visual refresh of the iPhone since, well, the iPhone. Samsung seems content to basically not respond to that with the Galaxy S9. It hasn't attempted to copy Face ID. It hasn't included one of those tricky new in-display fingerprint scanners. It's given up the screen-to-body ratio crown. There's no stage lighting clone, no ambitious gesture navigation, and perhaps most tellingly, no ultra-premium model to go toe-to-toe with the iPhone X.

My opinion? That's all very intentional. It's not a lack of will, technical capability, or investment. This feels planned.

Samsung, for as much criticism as I sometimes give them, do understand the global smartphone market. And they understand Apple, and what Apple's customers love about the company's products. Samsung isn't turning a blind eye here, and it isn't so arrogant as to believe it commands the larger smartphone narrative in the way Apple does.

Samsung, I think, will have something very special to show us that makes that clear. Whether that will be later this year or early next, I really don't know. I have about as much insight into Samsung's product plans as anyone else. But the Galaxy S9 already seems poised to pass by as a footnote in smartphone history - overshadowed by what comes next. We'll just have to wait and see what the "what" is. 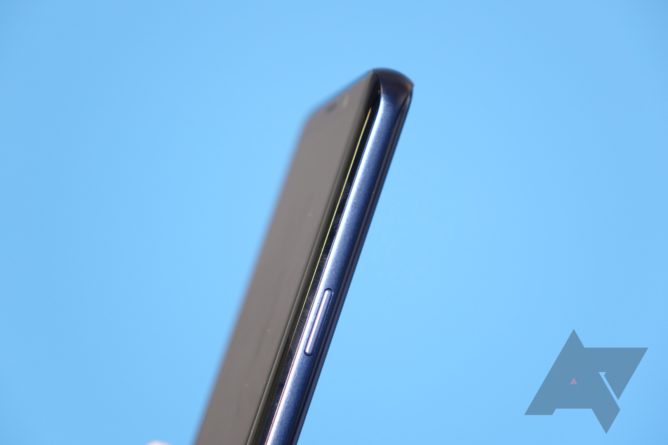