First, in conjunction with the news that Assistant is adding 30 new languages, 7 of which are launching soon, developers can now create actions in these same languages: Danish, Dutch, Hindi, Indonesian, Norwegian, Swedish, and Thai. Along with the 9 existing languages, this makes the total 16, but Google knows that the mere fact that a language is supported isn't enough to get all the developers on board. It's incentivizing them with the community program which could offer them up to $200 in Google Cloud credit, and by making it easier to build their first app without a line of code using just Google Sheets templates and by simplifying the process of localizing an existing app.

Also rolling out this week are new capabilities (Helpers) for Actions on Google that will let developers deep link from their Assistant app to something specific in their Android app. This is in addition to the announcement we saw earlier that Assistant would be able to perform actions inside an Android app. In the example below, SpotHero can take you to see your parking pass in its app directly after you book a spot through its Assistant app. 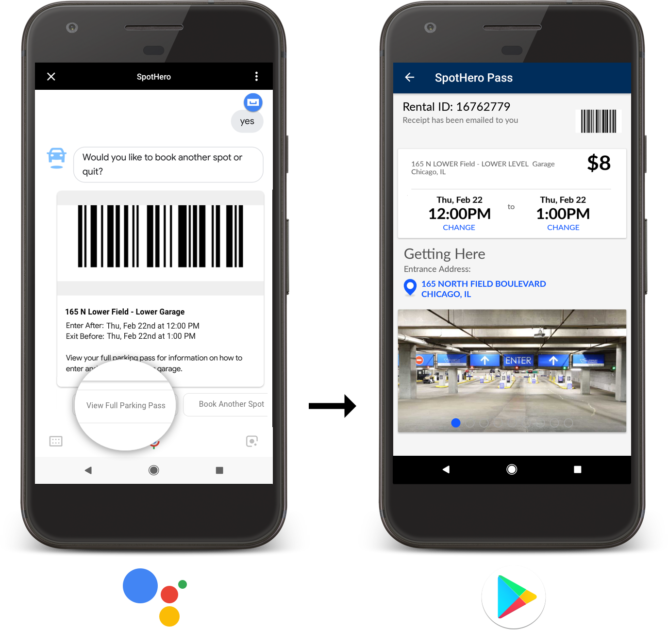 Among the helpers will be a new 'askForPlace' ability that takes its details from Google Places for location-based queries. As shown in the image at the top of the post, Assistant apps like Uber would be able to check if you want to give them your known home location, get it from Google, and prepare your ride accordingly without breaking a sweat or disturbing your experience.

And finally, the last change is one you'll be noticing straight away as an end-user. If you already use an Assistant app (check my Google Home guide for the detailed explanation and distinction), you must have gone a little annoyed by the constant, "Alright, getting serviceX" and introductory blabber each time you ask your Home or Assistant to "Talk to serviceX." Now, when you consistently talk to an app, the lead-in will be skipped and you'll instantly hear the answer. This is already live (Thanks, Eduardo Cerqueira) and I was able to replicate the behavior after talking a few times to my Nuki lock and Todoist task manager.

Huawei P20 leaked with radically different design, including an iPhone X-esque notch and 'only' ...