Today at MWC 2018, Huawei announced its new lineup of tablets: the MediaPad M5. As the successor to the MediaPad M3 (the number 4 is considered unlucky in China so most local companies skip it), the M5 keeps the 16:10 2560x1600 display resolution, curved metal unibody, and Hi-Res audio by Harman/Kardon but upgrades the processor, RAM, and cameras. There will be 3 variants available in two sizes: an 8.4" one for portability and a 10.8" for more screen estate and stationary use. The Pro version of the latter adds an active M-Pen for note-taking and sketching.

The M5 8 is the smallest of the new MediaPads but aside from the display and battery size, it doesn't skimp on the specs compared to its bigger 10.8" brother. The only tangible difference is the fact that it has dual stereo speakers on either side instead of quad speakers. The 2K display makes for a higher PPI count on the 8.4" size and Huawei is touting an "Eye Comfort Mode" that reduces blue light and an automatic display color temperature that adjusts to the current environment. It will come in both WiFi-only and WiFi + LTE variants. The MediaPad M5 10 brings a larger 10.8" display with Eye Comfort Mode and a larger 7500mAh battery, but it keeps pretty much the same specs aside from quad stereo speakers. Like the 8" version, it will be available in WiFi-only and WiFi + LTE versions. The MediaPad M5 Pro keeps the same hardware as the M5 10 aside from starting at 64GB and coming with one important addition: a 4096-layer pressure sensitivity M-Pen included in the box that has a few buttons to perform shortcut actions on the tablet like taking screenshots, deleting images, and launching apps. Depending on the app being used, the M-Pen also has tilt and shade effects, as if you're holding a real pen and scribbling on paper.

An optional keyboard will also be available for purchase separately, and it in combination with Huawei's software-based PC Mode, it transforms the M5 10 Pro into a PC-like work machine. Thankfully, all of these tablets will launch with Android 8.0 Oreo out of the box, unlike the rumors that said they might come with Nougat. There's no word on pricing or availability, so we'll have to wait until we know more.

Huawei says the M5 series will be available in the spring of 2018 in China, Europe, North America, Asia Pacific, and the Middle East. Here is the official pricing table: 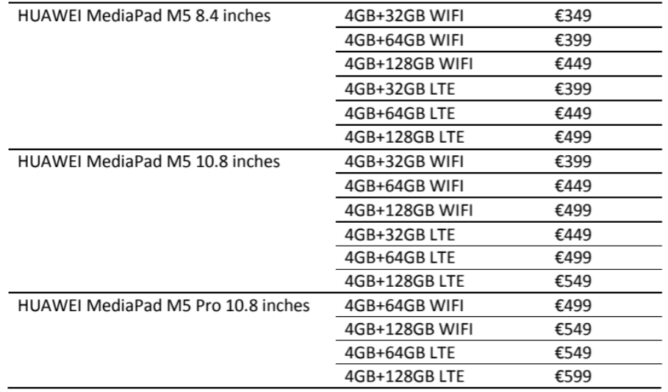