The Galaxy S9 and S9+ have rear cameras with adjustable aperture settings, allowing the phones to take photos at either f/1.5 or f/2.4. This may mean something to you, but in the event it doesn't, let me provide a brief explainer.

You might already be familiar with aperture values, or F-stops, as they relate to a camera's lens. Like the pupil of your eye, the size of a camera's aperture determines the amount of light that gets in through the lens to the image sensor. Many standalone cameras have adjustable apertures, which either expand or narrow a physical "iris" ring to let more or less light in. Almost all smartphones, though, have fixed aperture values, because including a moving part (the iris) is probably pretty complicated, expensive, and just all around difficult to do.

Samsung, though, has decided to do just that. The Galaxy S9 and S9+ have a moving iris in the rear camera that can change the aperture value of the lens. You can see the two settings demonstrated in the image at the top of this post (left is f/2.4, right is f/1.5).

The mechanism is pretty basic - it's essentially an "on" or "off" sort of thing, meaning you only have two aperture settings you can work with (f/1.5 or f/2.4). But this is still pretty novel stuff. Aside from a few weird one-offs like the Galaxy K Zoom or ASUS ZenFone Zoom, which were really just mediocre point-and-shoots strapped to the back of phones, we haven't seen many smartphone cameras get adventurous when it comes to moving parts. 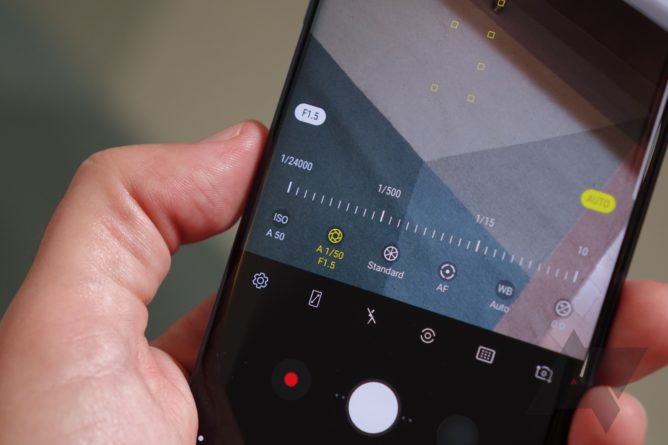 Why would you want a smartphone camera with an adjustable aperture? Samsung is using it for low-light performance, in particular. The camera will operate in f/2.4 mode unless ambient light is detected as being below 100 lux, at which point the aperture will open up into the wide f/1.5 setting to gather more of those precious photons. Combined with Samsung's new-and-improved low-light image processing, this should mean the S9 and S9+ will be substantially better at capturing images in challenging light.

You might rightly ask, though, why the camera wouldn't just always be in the f/1.5 setting. After all, more light gathering means you can use a lower ISO setting (less digital noise) and a much faster shutter speed (meaning crisper, sharper photos), right? Well, opening up the aperture quite so wide can have unintended side effects. For one, f/1.5 is a really wide aperture, and that can start to affect the lens optics in unpredictable ways, potentially introducing distortions or other issues. It can also make lens flare especially pronounced. And while most recent smartphones do use lenses with very wide aperture, the Galaxy S9's "narrow" f/2.4 setting is still quite wide in the larger context of photography - far wider an aperture than you'd need even for fast-shutter action images in broad daylight.

We're definitely looking forward to spending some more time with this camera, and we'll have plenty of samples to share when the time for our review comes. In the meantime, check out our hands-on with the S9 and S9+.

Galaxy S9 and S9+ hands-on: More of the Samesung