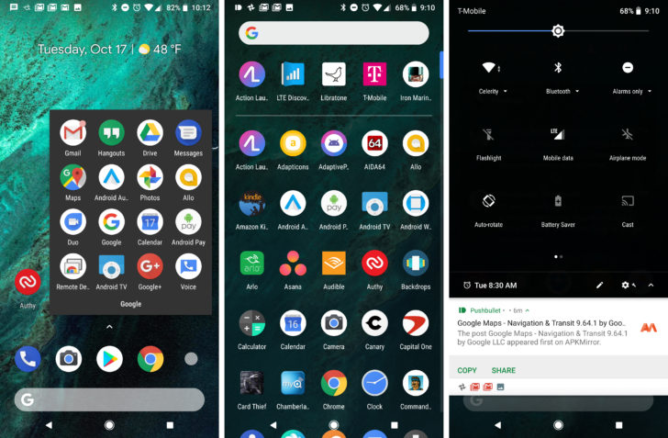 The automatic dark theme on the Pixel 2 XL.

Google had already made some progress in this regard, with an automatic light/dark theme being applied depending on your wallpaper on Nexus/Pixel devices (though it was initially exclusive to the Pixel 2 and Pixel 2 XL). However, having a dedicated toggle for this feature is obviously preferable. The feature request was first created on Google Issue Tracker in late November 2017, and a Google employee said that he/she had shared this with the engineering team and that the issue would be updated as more information became available. A little under four months passed with no news, but it was updated today to reflect the fact that dark mode will indeed be built into a future Android release.

Now that the topic has been dealt with, it's just a waiting game. In the meantime, it's probably time to start cursing Google out for not putting whatever other features that you always wanted into Android.

Google has walked back the system-wide dark mode promise once again, blaming a miscommunication with the team that handles AOSP issues. The dark mode isn't coming just yet, but rather a toggle will be added to Developer Options that will make it easier for developers to test night mode within their own apps. Here's the full statement:

Hi folks, you may remember me from the last three releases where it looked like Dark Mode was being added. Unfortunately, this bug was closed prematurely due to a miscommunication with the team that handles AOSP issues.

What we *have* added in a future Android release is a developer-facing setting (via Developer Options) to toggle the -night UI mode qualifier, which will make it easier for developers to create and test apps that implement night mode. This qualifier has been in the platform since Froyo (SDK 8) and globally modifiable via UiModeManager since Marshmallow (SDK 23); however, there was never an explicit toggle made available anywhere in Settings.

If it's any consolation, we will also not be adding Hot Dog Mode (where all UI elements are yellow and red).

ASUS just released a Chromebook Flip C302 with a Core m7 and 16GB of RAM, but you shouldn't buy it