But more broadly, it seems clear that smartphones are reaching their saturation point, at which just about every human being who wants a smartphone has one. If the phone they chose is decent, year by year they have little reason to upgrade, as many devices continue to run satisfactorily for well beyond the once-standard two-year upgrade period. As Gartner's Anshul Gupta put it, "High expectations and few incremental benefits during replacement weakened smartphone sales."

There were positive signs for both the industry as a whole and for two companies in particular. Despite the decrease in smartphone sales for the quarter, sales for 2017 overall actually increased by 2.7% from 2016, with over 1.5 billion phones sold globally.

And while all other major smartphone manufacturers felt the crunch in Q4, two companies saw meaningful growth in units sold and in market share: China's Huawei (up 7.6%) and Xiaomi (up 7.9%). 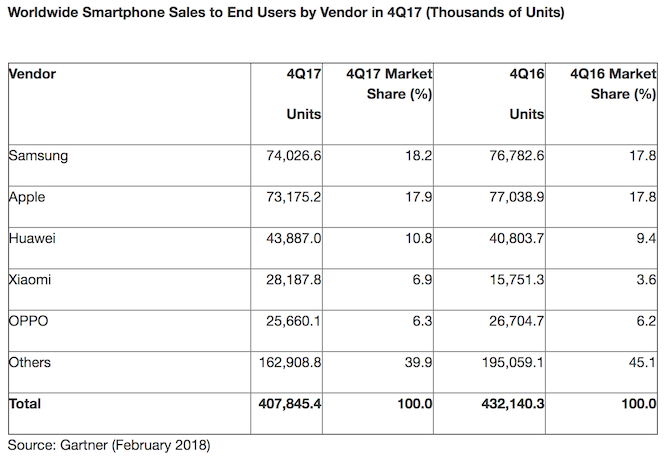 Overall marketshare and sales rankings remained the same between 2016 and 2017, as first-ranked Samsung increased its overall market share from 20.5% to 20.9%, and number-two Apple saw its share lower ever-so-slightly from 14.4% to 14%. Third-ranked Huawei jumped almost a whole percentage point (8.9% to 9.8%) and fourth-ranked OPPO made a fairly significant jump from 5.7% to 7.3%.

Gartner did not give rankings to companies such as LG, Lenovo/Motorola, HTC, Sony, OnePlus, or Essential (cough cough), lumping them all together as "others."

Also notably stuffed into the "others" bucket was Google, which is estimated to have sold only 3.9 million Pixels in 2017, well behind fifth-place VIVO's 99.7 million units. But Google can rest assured that phones running Android increased their dominance in worldwide sales, claiming 85.9% of the market, compared to iOS's slight shrinkage to 14%.