Street Fighter has had a bit of an odd history on mobile. Sure, there have been plenty of Street Fighter IV ports on iOS, but Android hasn't really seen any prominent releases outside of Japan. Well, today that all changes because Street Fighter IV Champion Edition is finally here. It may have taken 7 months for Capcom to port this from iOS to Android, but it would appear the wait was worth it as this is a full-on premium experience that can be purchased for the low low price of $4.99.

Right off the bat you will probably notice that the graphics aren't great. Despite the low-quality graphics I have to say everything else about this release holds up. The gameplay is solid, and it keeps a steady framerate the entire time. Plus, the touchscreen controls are pretty serviceable. And for the hardcore players out there it's worth pointing out that HID controller support is available. You can use bluetooth controllers as well as corded controllers over USB OTG. Oh, and if you were worried about customizing your controls, fret not, you can adjust them to your liking in the settings just as you would in any Street Fighter console title. Heck, you can even change the language to Japanese in the settings if you like, which is a nice touch.

Smartly Capcom has published this as a free game that includes a single $4.99 in-app purchase to unlock the full content. When playing for free, you will only have one mode and one character available to you, which is plenty enough to test out how the game runs and decide whether or not it is up to snuff.

When you pay to unlock the rest of the game's content, you will have 32 fighters at your disposal and a small range of single-player and multiplayer content to play through. This, of course, means you can fight against anyone else you wish in the online PvP battle section as well as work your way through the story mode at your leisure.

Oh, and Google Play Games Services is supported with an auto-sign-in and achievement system. Sadly any sort of cloud saving appears to be absent. I also couldn't help but notice that there are no Android TV boxes listed in the compatible device section on the Play Store. This is most likely due to the fact that the game does not support controller navigation in the main menu. 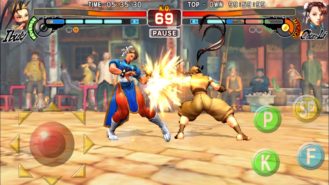 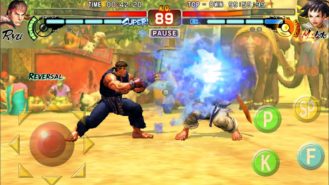 All in all Street Fighter IV Champion Edition is a quality release for Android that is reasonably priced and offers a solid range of content. Sure the graphics aren't great, and the touchscreen controls will never be as accurate as a physical controller, but none of this is really a surprise when the same game has existed on iOS for the last 7 months. If you have a hankering for some street fighting action, not only is Street Fighter IV Champion Edition your only choice, it is fortunately a good one.

Google will begin certifying Android devices for business use, starting with phones from LG, ...